‘I had this feeling one of us would end up killing the other’: Ann Turkel spent eight wild years married to Hollywood hellraiser Richard Harris. But 40 years on, she admits to JAN MOIR that they never really found happiness apart

On a warm November afternoon, Ann Turkel strolls along Hollywood Boulevard in her tight jeans and Michael Kors loafers.

She is tall and slender, with inky false lashes that blink behind her stylish sunglasses.

As she slips into the queue at Starbucks, you would never guess that she is 75 years old. Nor that she was once married to the actor Richard Harris, one of the most famous of all the Hollywood hellraisers.

She was his second wife, he was her only husband and their marriage lasted for eight tumultuous years at the height of his fame.

It survived his drinking and drug-taking, his jealous rages and paranoia. 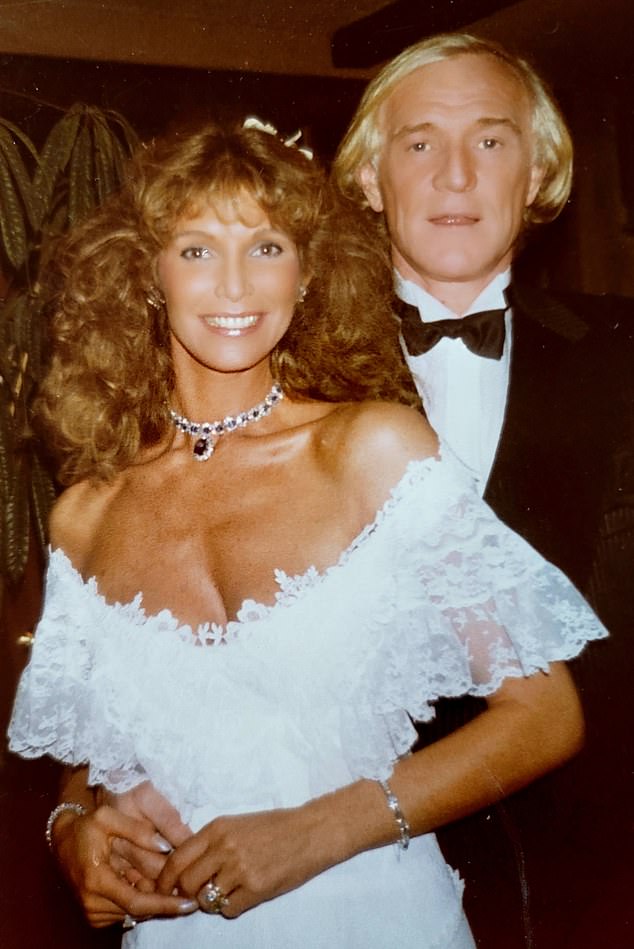 Richard Harris and Ann Turkel were married for eight years 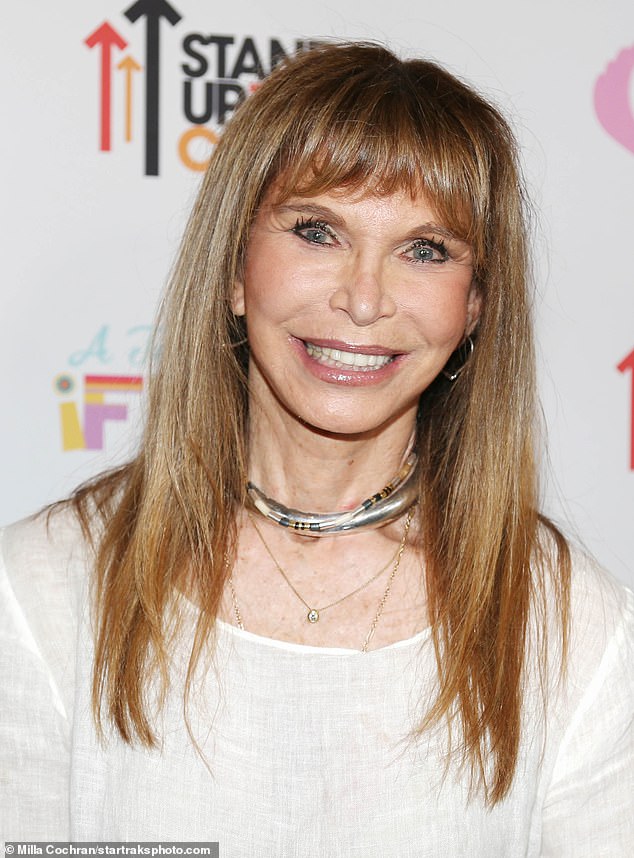 ‘In the end, it got to the point where I was walking on eggshells every time I woke up. I just couldn’t go on with it,’ says Ann today.

Yet, remarkably, she didn’t just stay friends with him after they divorced in 1982. She was on good terms with his first wife, Elizabeth, too.

Both women were at Harris’s bedside when he died in a London hospital of lymphatic cancer in 2002. The last thing Ann said to him was: ‘Don’t go yet, it’s not your time to go to the other side. Stay here with us.’

Twenty years on, Harris’s wild reputation is still making waves. Last week, his actor son Jared recalled how Harris started a fist fight in his 70s. And tomorrow night, Sky Arts will broadcast a new documentary about his life — The Ghost Of Richard Harris, made by Jared and his two brothers, actor Jamie and director Damian. Ann has seen a preview of it.

‘I love those boys. And it is so beautifully done,’ she says. ‘There was so much more to Richard than just his reputation as a drinker.’

Indeed, she insists that he didn’t drink for long periods during their marriage and ‘only started taking drugs towards the end’.

But then she will tell some hellzapoppin’ tale of Harris’s outlandish excess. Like the time, before they were even married, when she arranged a surprise birthday party for him at a restaurant in West Hollywood. 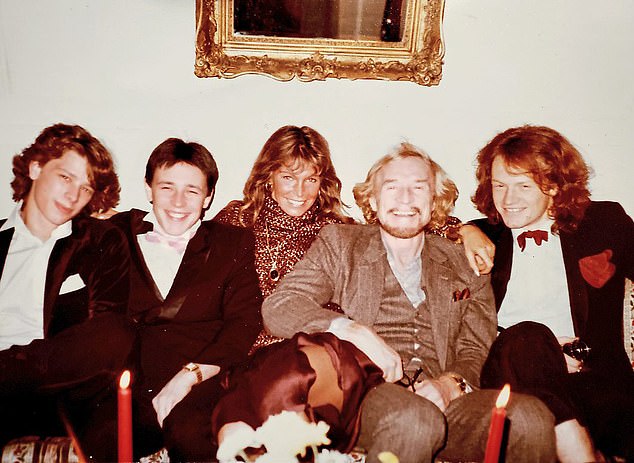 Festive fun: Richard and Ann with his three sons Damian, Jamie and Jared at Christmas 1978

‘He was thrilled, ecstatic when he arrived,’ she says. ‘As the evening wore on, he started drinking more and more.’

At one point he put his fist through a mirror behind the bar and when she tried to staunch the blood and take him to hospital, he said to her: ‘Who are you?’

The next morning he told her: ‘I don’t drink like that, you know. It’s just that once a year I like to have a good drink.’

When she told her agent she was going to marry him, she begged Ann not to — but the lovestruck young actress went ahead and did it anyway. ‘And I never regretted it.’

She orders a medium chai latte with soy milk and a virtuous snack of two egg white bites. We sit at a table outside where her attention is distracted by two male drivers having an altercation in the street because one of them won’t reverse out of the other’s way.

‘Just back up, jerk!’ she shouts, which is exactly what you would hope a Richard Harris ex-wife would do. Now. Where shall we begin?

‘It was Bogie and Bacall all over again. We were like Heathcliff and Cathy. It was a karmic thing that had to happen,’ she says. 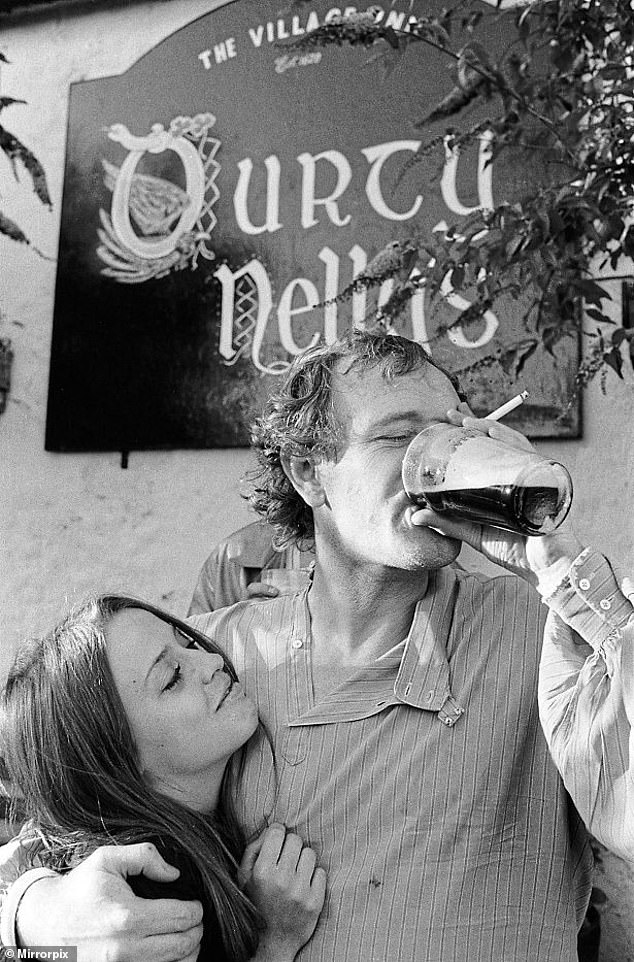 Drinking up: Harris celebrating his first divorce in 1969 with unknown admirer

‘I never thought I was attractive, but obviously I think he found me attractive because I was so young and so innocent. I think he thought, “She is a blank slate. This is someone I can mould into the woman I want.” ’ She remembers seeing him on set in a ‘forest-green velvet suit with a pale blue shirt, tanned, clean-shaven and with short, blond hair — and I was like, wow’.

The feeling was mutual. In the movie her character wore a diamond butterfly necklace and Harris told her that if she was good in the film, he would buy it for her. ‘I still have it. Oh God, I’d be starving on the street before I got rid of it.’

She claims that Richard’s marriage to her was markedly different to his marriage to first wife, Elizabeth. Incidentally, not content with just one hellraiser, Elizabeth went on to marry the volatile Rex Harrison before marrying two cousins, stockbroker Peter Aitken and, finally, disgraced MP Jonathan Aitken.

‘Elizabeth would tell these wonderful stories about how he would go to the pub and disappear for a month. Then he’d show up and ask her, “Why didn’t you pay the ransom?” I would have socked him in the mouth if he had done that to me.’

Early in his career, Harris was said to have had affairs with Danish singer Nina van Pallandt, the Empress Soraya of Iran, and actresses Merle Oberon, Faye Dunaway, Mia Farrow and Ava Gardner. He once told his friend Joe Jackson — the Irish journalist who features in the new documentary — that he had ‘a brief affair with Princess Margaret’.

‘I knew everything. Richard told me everything. I knew about all the women. And he didn’t have an affair with Ava,’ says Ann, ‘but he did have to fight off Sophia Loren. Oh, Sophia was mad for him. They met when all three — along with Ava Gardner — were in Rome making a film called The Cassandra Crossing [1976].

‘Sophia would sit there the whole day, staring at him. She was always inviting him for lunch or dinner, but he always refused. He would be going somewhere and hear the click of heels following him — Sophia again.

‘ “Why don’t we spend the evening together?” she would say. This went on for weeks.’

Wasn’t it terrifying, having Sophia Loren chasing your husband?

‘No, because I knew Richard would totally annihilate it.’

Harris called Carlo Ponti, the film producer and Loren’s husband, to say: ‘If this doesn’t stop I’m walking off the movie right now.’

So when Richard was good he was very good, and when he was bad, oh my God. Ann tells me the story of one epic night out in 1976 with her best friend Alana Stewart, who was then married to actor George Hamilton. ‘We wanted our husbands to meet, we thought it would be lovely.’

They started with dinner at 21 in New York, where Harris — after six months of sobriety — starts drinking Bloody Marys. At the El Morocco nightclub, he and Alana move on to vodka stingers.

‘Many stingers later we are at PJ Clarke’s. Alana is up on the bar singing The Yellow Rose Of Texas, Richard is standing on the bar reciting James Joyce. It is four in the morning, all George and I want to do is go home but we move on to a club in Harlem.

‘I say to Alana, “Please let’s go home” and Richard, not knowing what I said to her, thinks I was saying something bad. I don’t know what he thought. Who knows what he thought? He jumps off the table where he was reciting Shakespeare and goes to attack me. I run into the jukebox and fall. The two bartenders jump over the bar and hit him in the back of the shin. He drops to the floor, George grabs me and puts me in the car.’

Later, a taxi drops Harris off at their home. Ann has to pay the fare and drag him into their apartment by his feet. When he wakes up in the morning he asks for his English breakfast, so she makes him eggs and bacon.

‘He then looks at my right hand, which is the size of a baseball mitt. And he goes, “What happened?” ’

What happened was that she had fractured her wrist and ended up in a cast up to her elbow.

Did she think of herself as an abused wife? ‘There was never physical abuse. What happened would be he’d go running after me and grab the end of my robe and I would fall into the wall but he would pick me up. He never raised a hand to me, ever.’

It still sounds, I venture, very unhealthy. ‘Yes, because when he drank, he was an unhealthy person.’

Even today, Ann still does not believe her husband had addiction issues.

‘To me, he wasn’t an alcoholic. In the movies people who are alcoholics look everywhere to find booze but he wasn’t like that.

‘To be honest, I mean, yes, there were dark times between the two of us but he only drank when he went out. And he wasn’t a happy drunk. He was morose and angry.’

By contrast, she never drank, smoked or took drugs. ‘Destroy my life? No.’

There came a point when they both knew the marriage had to end.

‘I think it was a combination of things. I had this feeling that one of us was going to end up killing the other. Not deliberately, but in an accident. And we both knew that it was going to be me. And I just couldn’t be myself around him any more.’

Whey they parted, he insisted they get divorced in the Bahamas — where he had a home — rather than California, where a wife can be entitled to up to half her husband’s assets.

That way, he didn’t have to give her any money. Wasn’t that incredibly mean of him?

‘I didn’t think so. I didn’t want his money anyway,’ shrugs Ann, who clearly lacks the gold-digger instinct.

She hasn’t had any acting roles in a long time and now lives in a small apartment nearby. She had to sell her house when she became a full-time carer to her ageing parents, now both deceased.

‘That burned through my money,’ she says. Over the years she has dabbled in many business ventures; she launched a mobile fitness centre, invented the Unsuit — a bathing costume you can tan through, formed her own heavy metal band called Turk and a duo called Foxy Lady with Heather Taylor, wife of The Who singer Roger Daltrey.

She now runs a charity greetings card business from her home, and I think it is fair to say that none of these endeavours made her a fortune.

She never had children and the two pregnancies she had when married to Harris had to be terminated because of medical complications. Was he pleased when she became pregnant?

‘God, yes. He wanted a daughter more than life itself. Elizabeth gave him three wonderful sons, but he still wanted a daughter. He wanted a girl because he wanted her to look like me — but what would have happened if she had looked like him? Not so good,’ she laughs. Sometimes she even thought she was his surrogate daughter herself.

‘He liked to take me shopping, have me try on all these outfits. It was like he was dressing his little daughter, it was like I was his doll.’

They remained close friends after being divorced, but did not sleep together again, despite his prowess as ‘a wonderful and passionate’ lover. For a start, Ann had other boyfriends —but no one ever quite matched up to him.

‘He had a certain addiction to me. He never got married again. Never got engaged again. He never lived with anybody again,’ she says.

What does she think that means? ‘That he never got over me?’ she wonders.

Or perhaps they never quite got over each other.