Ant Anstead has been doing more than crying and eating ice cream in the wake of his split from Christina Anstead, he’s actually seeking professional help!

As you’ll recall, the momma of three was first to announce the uncoupling via Instagram last month, with the UK-born TV personality confirming the news with his own statement just over a week later. From what we can gather, it seems to have been less of a mutual choice to call it quits, at least according to Ant who specifically said it was “Christina’s decision.”

On Sunday, the Wheeler Dealers host shared a post to his Instagram Story where he revealed he has been participating in a “Breakup Recovery” course in light of his separation. Not only does it give insight into his current mental state, but also a more exact split date!

The father of three wrote (below) along with a promo image and swipe up link for the Create the Love course founded by “human connection specialist” Mark Groves:

“I am now on day 30 of this and I have to say it’s been a lifeline for me! If anyone out there needs this DO IT!”

Based on “day 30,” that puts his start date at September 18, just one day before Christina’s post went live announcing their intent to divorce. Ant was nearly 10 days into the course before he posted anything about the breakup publicly. Maybe that’s part of the program? 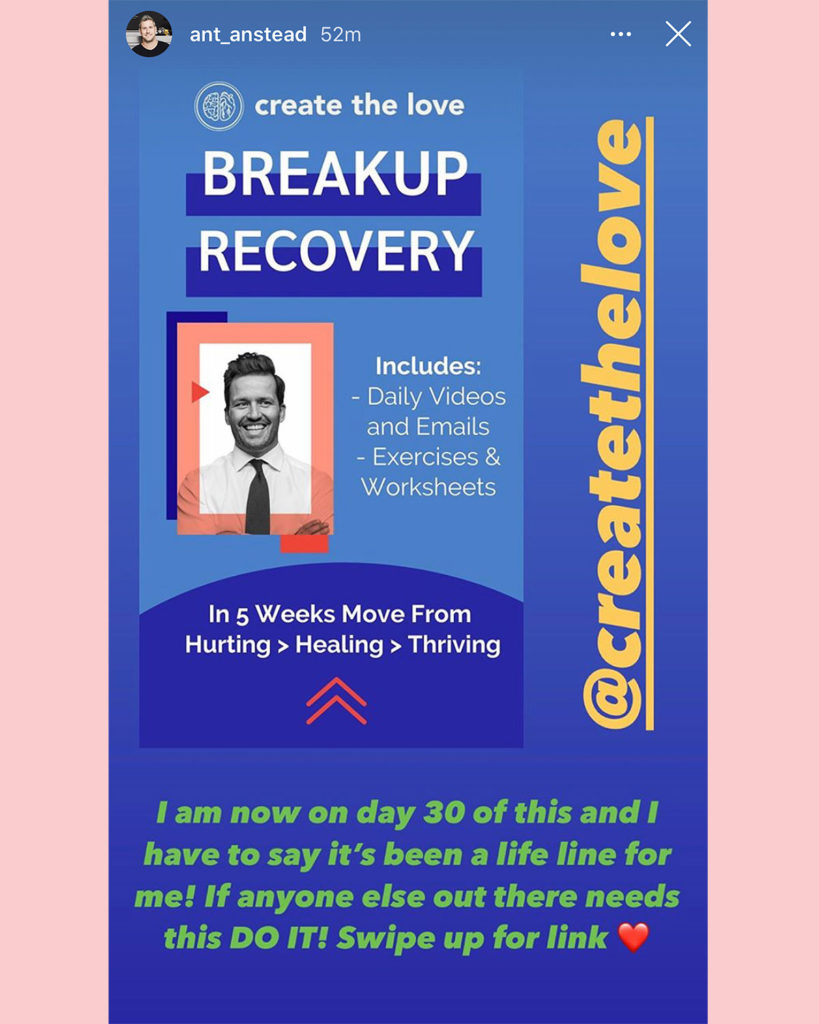 So, what exactly does a breakup recovery program such as this entail? According to the course’s website, the company offers a podcast, coaching, retreats, and more to help the brokenhearted “design the life and love longed for.” The breakup recovery class is specifically designed to help people “move from hurting > healing > thriving” in five weeks, and involves daily exercises, worksheets, videos, and emails.

We sincerely hope this gives Ant the help he needs!

As for his soon-to-be ex, she’s taking a different approach to things! The Flip or Flop co-host recently shared she was the proud new owner of a yacht, aptly named “Aftermath.” Big purchases aside, the former Mrs. Anstead also opened up a bit about how she had been feeling about the separation, just a few days after posting the big announcement:

“Sometimes our calling is bigger than our plans. I never thought I would have one divorce let alone two. I never thought I would have 2 baby daddies – but sometimes life throws us curve balls. Instead of getting stuck in these “setbacks” I choose to look at these challenges as opportunities to grow. So while some may judge me and throw around rumors about me, most of you support me. And that says a lot about this world and where we are headed.”

Let’s hope for the sake of their son Hudson, this former couple can move forward separately in the healthiest way possible!