Former glamour model Casey Batchelor has revealed to New magazine that she sank into a deep depression over the first lockdown and felt “really, really low”.

“I don’t really get like that because I’m quite a chilled out person. I’m quite positive,” she tells new.

However, given her circumstances, it’s hardly surprising the Essex-born star was finding life tough. Having just given birth to her second daughter Sadie, now nine-months, Casey, her fiancé Dane Goodson and her two-year-old daughter Florence had only been living in their new house for three weeks before lockdown began.

They lived miles from their families and Dane was out at work all day, while a sleep-deprived Casey looked after both kids by herself. “It was full-on,” she admits.

But Casey continued that she's in a very different place and extremely happy. In fact, the 36-year-old former CBB star is feeling so much better that she’s decided she wants to start trying for a third baby.

Casey reveals she and Dane, 32, would love to have a boy this time, but that they’ve rejected the offer of gender selection treatment, choosing instead to let nature take its course.

Here, Casey tells new magazine all about her Christmas plans, why her mum thinks her baby plan is insane and changing her mind about her dream wedding…

Hi Casey. How did you cope during the first lockdown with two young kids?

Oh my God, Dane still went to work because he does stuff for the NHS. He’s got a facilities company and they were printing a lot of the labels for the Covid-19 testing. Sadie was only seven weeks old, so obviously I’m up during the night doing all her feeds and then up at the crack of dawn with Florence, changing nappies all day. And Florence still isn’t speaking properly and is really slow with her speech. Honestly, I felt like I was going to have a nervous breakdown.

That sounds really difficult. You had a C-section – were you still recovering from that?

Yeah, so it was pretty tough. It was full-on.

Is Florence’s speech getting any better now?

She’s at nursery now and they’ve said it’s nothing to worry about. And she’s starting to say a few words. During the last lockdown, obviously she couldn’t go and it was really detrimental to her, but she’s come on so much since starting nursery – it’s so good for them. She’s also the most amazing climber. I will find her up on cupboards and think, “How the hell did you get there?”

With Dane at work a lot, do you feel envious of pals who’ve had their partners working from home?

Oh my God, yes. My best friend has just had a little girl and she’s got a three-year-old and her partner is at home so she’s got all this help. He comes down and has lunch with them. And I’m like, “Oh my God, I wish I had that!” Dane is at work until 10pm some nights. In the morning, I’m like, “What time are you home tonight?”

Is he hands-on with the children when he’s there?

At the weekends, yeah. He used to love playing golf and now he doesn’t do any of that because he’s with us. And do you know what? The girls absolutely adore him. They love it when he’s home. They’re definitely daddy’s girls.

Is he besotted with them?

Yeah, he loves them. He’s actually been with Sadie as a baby a lot more than he was with Florence. He didn’t bond so much with Florence because he was never at home. But now him and Florence are like two peas in a pod and she will not leave his side.

Yeah, at first he was like, “It’s a baby, I don’t really know what to do. I can’t bond with her.” But I was like, “I’m exactly the same as you, but you have to create a bond.” But they find it difficult, don’t they? Women are so selfless and men are so selfish – they don’t even realise!

You said you felt like you were having a breakdown. How bad was it?

I felt really, really bad. Some days I would just sit there and cry. It just felt like a lot of pressure. I couldn’t see anyone, I couldn’t see any friends. I was up all night with the baby and up all day with Florence without having had any sleep. It was a low that I don’t think I’ve ever felt before.

Are your parents nearby?

My dad lives over an hour away and my mum lives 50 minutes away. Dane’s parents are in Kent, so nobody’s that close to us. And we’d just moved to a new village, so didn’t know anyone.

Did the grandparents find it tough not being able to see their grandchildren?

My dad had only met Sadie once before lockdown. She’s one in three months, but my dad has only met her about five times. It’s so difficult. It feels like he’s missed out on so much already.

What about Dane’s parents?

Before lockdown we’d go down to stay with Dane’s parents a lot and they’d come to us, but obviously we couldn’t do that. Do you know what, thank God for FaceTime! We did that all the time.

Was Dane understanding when you got really down?

Do you know what, he was so good. One night I was sat in bed and I said to him, “I’m feeling really, really depressed. Like, really bad.” And the next morning, bless him, he wrote a list on the chalkboard in our house of everything we should be grateful for. He was just
really supportive.

And he took you on a mini-break without the kids, didn’t he?

Yeah, as soon as we were allowed to, he booked us a trip to Crete. But then that came on the quarantine list, so we changed it to Italy. I just needed a few days to get some respite. We had the best time.

Was it nice to bond as a couple?

Yeah, it was so lovely. You know what it’s like when you have children. When the girls were born, we slept in separate beds because of the night feeds, so it was just nice to spend some quality time together. Dane works really hard as well and I’m always with the babies.

Absolutely. I don’t really get like that because I’m quite a chilled-out person. I’m quite positive. I do yoga and meditation and I always look on the brighter side of things. I’ve calmed Dane down actually, because he used to be quite a stressy person and now he’s very chilled. I’m always saying, “Don’t let things worry you.” So, when I said I was down, he knew, because I’m never like that. 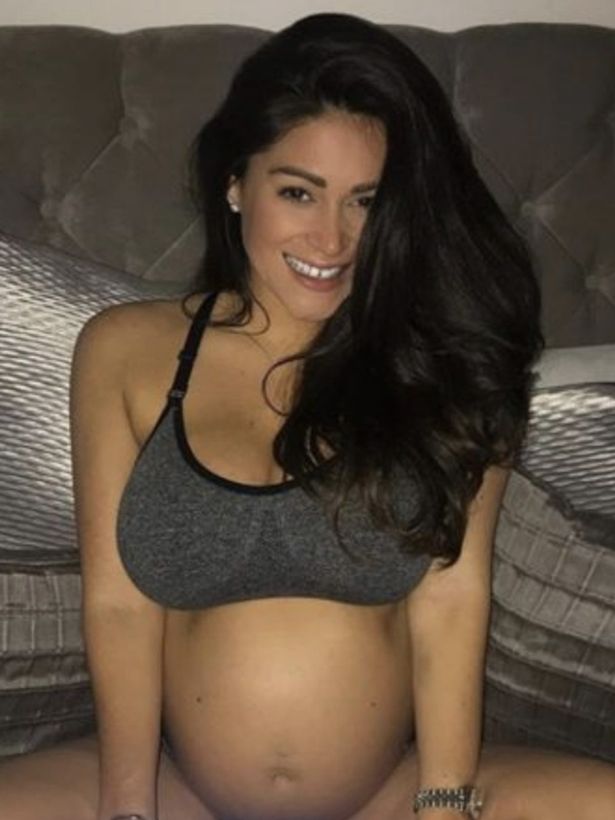 Did you feel lonely and isolated in lockdown?

Well, yeah, and there was no baby groups and no family, no nothing. We were literally just indoors.

But despite all of this you want another baby?

[Laughs] I know! We’re going to try again. I think this will be the last time though. We’re going to start trying now and just see when it happens – but this is the last one. I’m 36 now and by the time I’ve had the next one it’ll be like I’ve spent the whole of my thirties being pregnant and having babies. I’d like my life back a little bit in my forties.

Look, it would be amazing to have a boy because we’ve got two girls. But Dane and I were talking about it today and said we wouldn’t mind if we had another girl. We’d be blessed to have three children – some people can’t even have children. Also, you know that saying about how a daughter is a daughter for life, but you only have a son until they find a wife! So we’d have three girls looking after us for life.

I mentioned once in an interview that people had suggested we should do it and then a clinic approached me on Instagram about it saying they’d be interested in a collaboration. But I just feel like we should do what’s natural. I don’t want to go down that road. I feel like it’s messing with nature and we should just be grateful for what we have. We’re so blessed.

Do you have any names in mind for a third?

I find boys’ names a lot harder than girls’ names. I feel like there’s a lot of cool, fun girl names, but a lot of boy names are quite common. If we had a boy, Dane would love to call him Dane Jr. I’m really not keen on the idea. I’m very open about telling him that though!

Does your mum think you’re completely insane wanting another baby, given how exhausted you are?

Why are you in such a rush?

I want them to be close in age because I think it’s nice growing up when siblings are all into the same things. And I’m not getting any younger – it gets tougher the older you are. Dane was saying we’re going to be changing nappies for another three years to come, so we might as well get it over and done with. We’re in baby mode, so let’s just stay in baby mode. I don’t want to come out of the tunnel and then go straight back into it again.

You’ve just lost all the baby weight you gained with Sadie – are you prepared to do that all over again?

I lost nearly 4st after Florence and then I fell pregnant with Sadie. This time I’ve lost 2st 7lb and now we’re trying again.

Tell us about your Yoga Blitz programme…

Obviously, I’m qualified as a yoga teacher and after I had Florence I was combining my yoga moves with high-intensity exercises – kind of like HIIT yoga. And that combined with calorie counting worked for me. It makes me feel so happy when people get results after doing sessions on my website. It’s helping people physically as well as mentally.

Are your wedding plans on hold right now?

Yeah, because I want all the children at the wedding, so it would be nice to have a baby next year and then hopefully I’ll be married before or when I’m 40. That’s my hope.

What kind of wedding do you want?

What does Dane want?

He’s not so keen on the England idea. He definitely wants a wedding abroad.

7 Things We Learned About Maluma From His Historic Elle Cover

Tiger Woods’ Net Worth: How Much The Iconic Golfer Is Actually Worth

Lucy Hale & Lucas Till Star In ‘Son of the South’ Trailer – Watch Now!

Do Impeached Presidents Get Secret Service? This Gets Tricky