Saturday’s programme was filmed live in a studio for the first time since March 14, during which the cameras cut to footage of Crystal Palace’s Wilfried Zaha having a Zoom video call.

The awkward faux pas happened when former Love Islander Josh was telling Zaha about the charitable efforts of his housemate John. 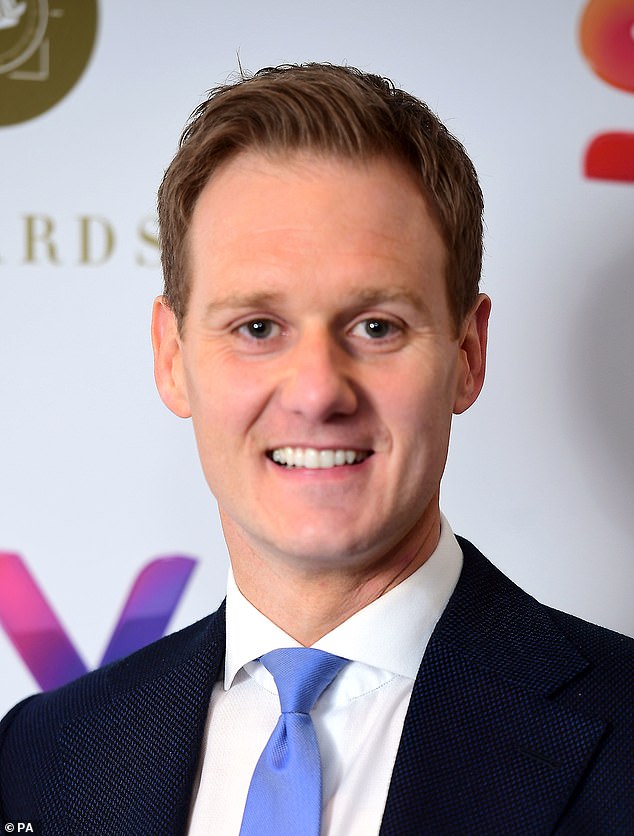 Backtracking: Dan Walker was forced to apologise after Josh Denzel appeared to swear on Football Focus on Saturday

He said: ‘The thing is, yeah, my housemate John is a massive Palace fan. He rowed f****** five marathons in five days on the rowing machine.’

The footage then cut back to the studio, when it soon became apparent the offending language had not been edited out of the clip.

Taking to social media in the aftermath, Walker issued a strong apology and acknowledged the programme carries a large viewership of young people. 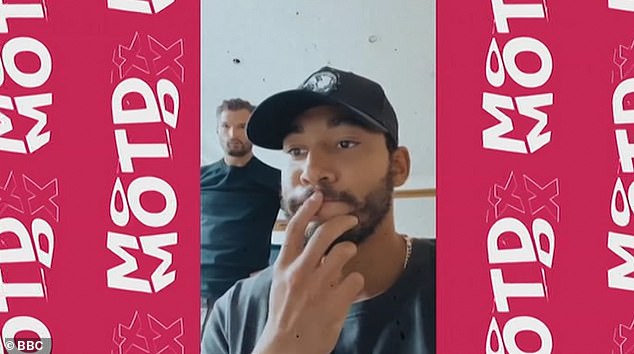 Awkward: Josh was speaking about his housemate’s charitable efforts during lockdown when the swear word was heard 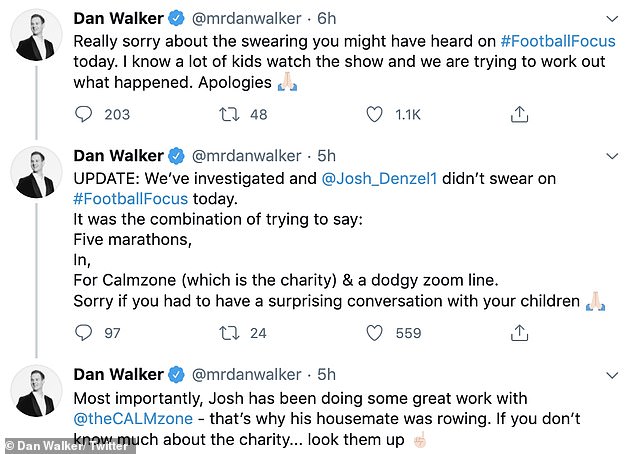 Clearing it up: The sports presenter said the swear word was a result of a faulty Zoom conversation 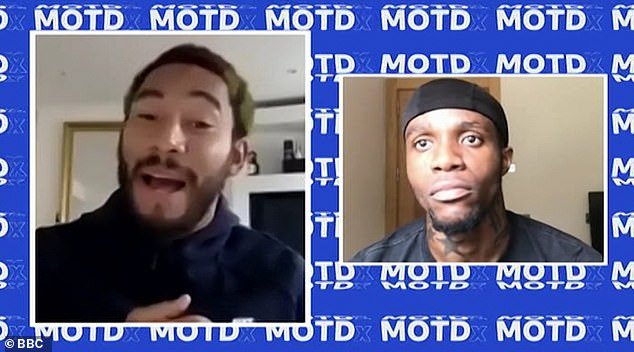 He said: ‘Really sorry about the swearing you might have heard on #FootballFocus today. I know a lot of kids watch the show and we are trying to work out what happened. Apologies.’

The broadcaster later went on to explain that Josh had fallen victim to an awkward editing malfunction.

‘It was the combination of trying to say: “Five marathons, In, For Calmzone” (which is the charity) & a dodgy zoom line. Sorry if you had to have a surprising conversation with your children.’ 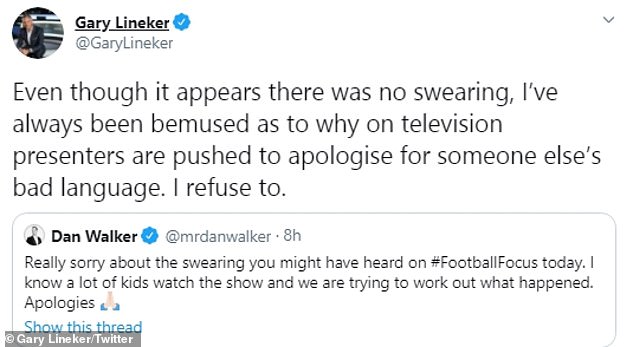 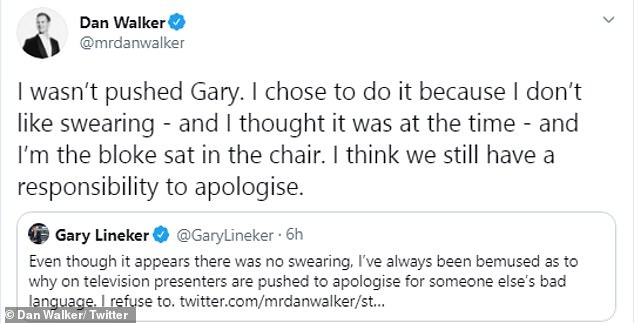 But the row didn’t stop there as Gary Lineker and Piers Morgan got involved on Twitter.

Gary, who also front BBC sports coverage with Dan, said: ‘Even though it appears there was no swearing, I’ve always been bemused as to why on television presenters are pushed to apologise for someone else’s bad language. I refuse to.’

But BBC colleague Dan replied: ‘I wasn’t pushed Gary. I chose to do it because I don’t like swearing – and I thought it was at the time – and I’m the bloke sat in the chair. I think we still have a responsibility to apologise.’ 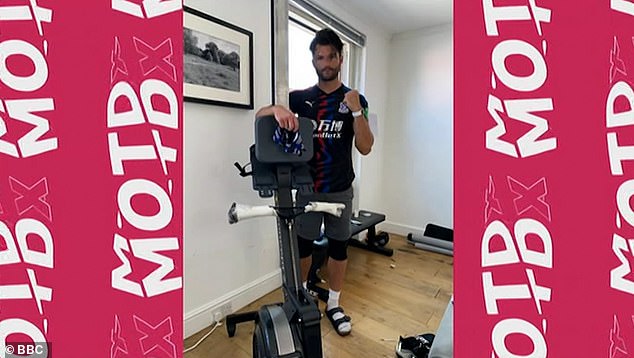 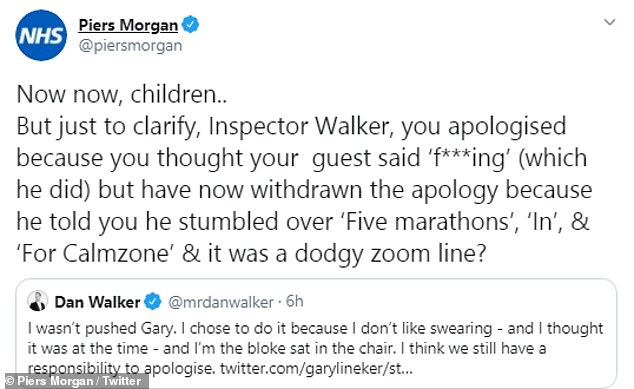 Not convinced: Piers Morgan then intervened, implying he didn’t quite buy Dan’s reason for the blunder

Then Piers, who often banters with Dan and Gary on Twitter, entered the conversation, implying he didn’t believe the excuse for the broadcast swear word.

He said: ‘Now now, children.. But just to clarify, Inspector Walker, you apologised because you thought your guest said ‘f***ing’ (which he did) but have now withdrawn the apology because he told you he stumbled over “Five marathons”, “In”, & “For Calmzone” & it was a dodgy zoom line?’

Dan then poked fun at his breakfast show rival, tweeting a photo of a character from Home Alone 2 who bears a similarity to Piers.

He said: ‘Your tweet is about 80% factually incorrect… which isn’t bad for you. Anyway, give it a rest, I’m just about to watch Home Alone 2 with the kids and don’t want to be disturbed.’ 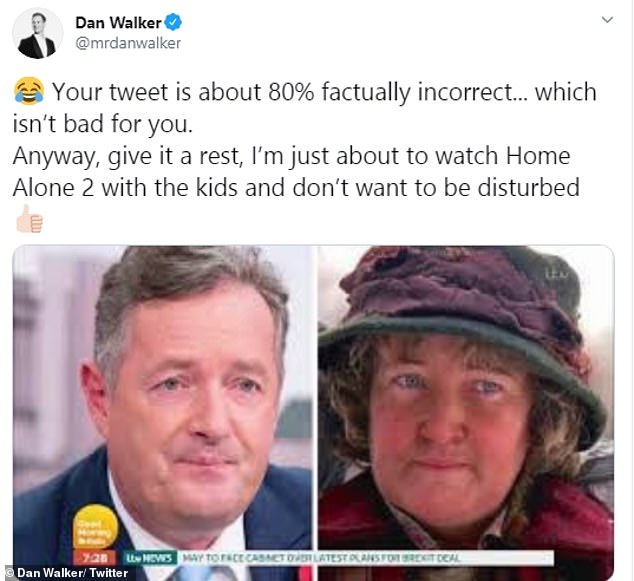 Poking fun: Dan then took aim at his breakfast show rival, saying he looked like a character from Home Alone 2 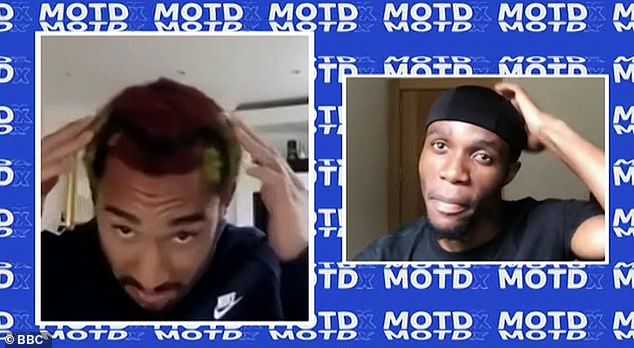 Doing his bit: Josh said he dyed his hair like basketball star Dennis Rodman to support his housemate

after, apologises, DAN, Lo, Walker
You may also like:

Jesse Tyler Ferguson Starts Off His Morning with a Coffee Run

Pregnant Krystal Nielson and Boyfriend Miles Bowles Move In Together