Emily Ratajkowski recently announced her first pregnancy, and was inspired by this to create the perfect Halloween costume.

The model shared two snaps on her Instagram Stories this weekend which revealed that EmRata had re-created Demi Moore’s pregnancy photo shoot. Moore’s iconic photos appeared in Vanity Fair in 1991.

Moore was photographed by Annie Leibovitz for the legendary photo shoot when she was pregnant with her second child, Scout Willis. The Striptease star famously appeared completely naked on the magazine cover, and wore few clothes in subsequent photos during the shoot.

Wearing a short brown wig, black lacy underwear, and an oversized white dress shirt falling off of her shoulders, Ratajkowski threw it back to the early ’90s. EmRata captioned the snaps, “Demi’s Body.” 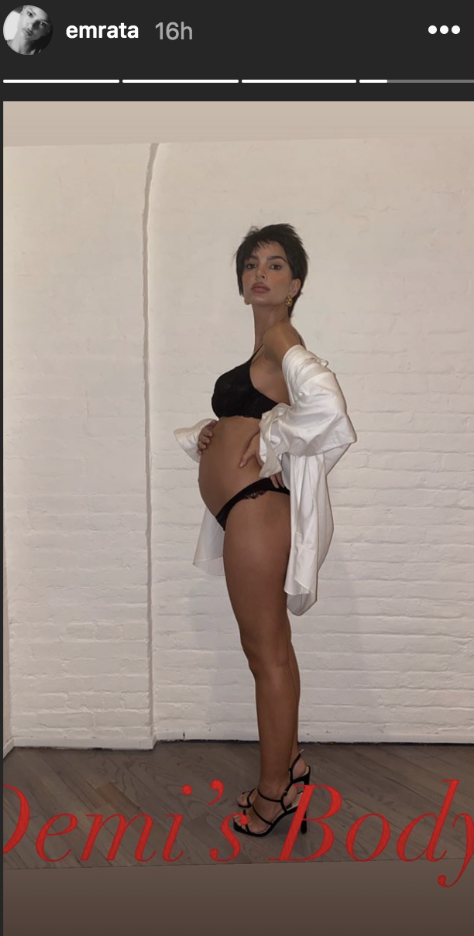 Earlier this week, Ratajkowski posed nude in her apartment, although she kept her socks on. Sharing mirror selfies, she captioned the two photos, “20 weeks … getting to know my new body.”

Ratajkowski is expecting her first child with her actor and producer husband, Sebastian Bear-McClard. The couple tied the knot in February 2018 in a surprise ceremony in New York. Speaking of her decision to not wear white at her wedding, the model told Vanity Fair, “I never loved the idea of wearing white for a wedding because I’m not a pure woman. I’m a woman with a lot of character and experience and life. I also just loved the idea of a suit, especially at City Hall because it’s like you’re taking care of business.”

She continued, “I really wanted to wear red actually, initially… and then I just loved mustard yellow and just knew it was the one.”