Follow
Home » Celebrities » Everything TNT’s ‘Snowpiercer’ Changes About the Movie

Everything TNT’s ‘Snowpiercer’ Changes About the Movie

Spoiler warning: the following story contains spoilers for both the movie and TV pilot of Snowpiercer. Stop reading here if you don’t want to be spoiled.

Bong Joon-ho’s 2013 film Snowpiercer is maybe the perfect sci-fi action film, something like the lateral hallway fight scene from Oldboy made into an entire movie. The concept, simple, intense, readable: left to right, battling waves of attackers, for two hours.

The film was a Korean/American collaboration and joined Chris Evans and Song Kang-ho (who would team up again with Bong for the Best Picture-winning Parasite). It also exploded—if not in its limited theatrical release, then certainly onto your Netflix account. While Netflix is coy about viewership numbers, Snowpiercer proved successful enough for the streaming network to offer Bong his own film, Okja. The next few years are Oscar history.

Pouncing on the film’s popularity, TNT and then TBS and then TNT again began developing a series, also Snowpiercer, which would be executive produced by Bong. Though, it’s unclear what role the original director played, the series being written instead by over ten separate creatives. (The film, based on the French graphic novel by Jacques Lob, was penned only by Bong and American screenwriter Kelly Masterson.)

Did all this back and forth and production mayhem alter the original film? You bet. Was it for the best? Probably not.

Here are all the differences between the movie and the series so far.

The film takes place in 2031, about 19 years after a man-made climate disaster, which plunged the earth into an ice age. How passengers first reached “Snowpiercer,” a biblical arc-like train circumnavigating the frozen earth, we never learn. The details aren’t important, as the film proceeds to its major forward-moving revolution fairly quickly. We do learn, however, of an earlier revolution that took place earlier into the train’s voyage. That revolt, apparently, is the central narrative of the TNT series, which takes place just over 6 years since “departure” more than a decade before the film.

In the series, we also learn that most of the passengers in the back of the train (the poor and lower class) boarded the train by force; there was apparently some lottery system that excluded poor people, because: class conflict. 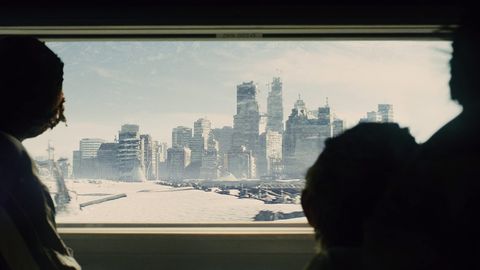 Though it’s still the same “Snowpiercer,” the TNT series reveals more about the train’s ecosystem than the film. In the film, we progress through train cars resembling various stations of class, work, and entertainment—a prison, dining cars, a night club, a school, an aquarium, a greenhouse, various medical and grooming services, etc.


The series presents the train in much the same way, though we spend a bit more time in the first class, which generally just looks like a fancy brunch restaurant. We also see a clearer demarcation with some middle class trains resembling dirty dystopian-like cities.

The major difference, however, has to do with how the cars are revealed to the protagonist (and so also to the viewer). In the film—as in the series—the back cars contain no windows, making the moment we first encounter sunlight both jarring and revelational. In the series, however, because we encounter the sun-bathed first class early on, this revelation comes more as an ah-ha, as do similar scenes involving the greenhouse and aquarium. Though the series attempts the same aesthetic moments, the payoffs are virtually non-existent.

In the series, we follow Layton (Daveed Diggs), a former homicide detective. We also meet another character that was apparently Layton’s lover on the train. Unlike the film, the series looks to be far more character-driven than traditionally plot-driven (this shift is common in most dramatic television). 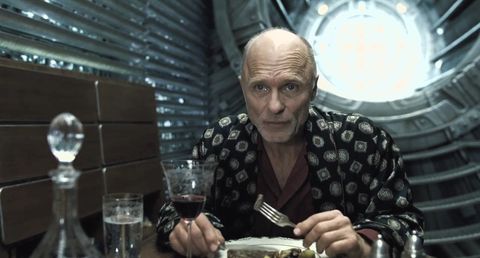 The film finds Wilford, the conductor of the train, only at the very end. Wilford (Ed Harris) marks the apex of Curtis’s journey. He is the father/god-figure the hero confronts and from whom he learns the ultimate secret of “Snowpiercer,” the revolution, and his own role.

In the series, we learn of Wilford’s identity (Jennifer Connelly) at the end of the first episode. The reveal will no doubt add a strong dramatic irony to the interaction between Layton and the unknown Wilford. Whether that irony is more effective than mystery, however, we’ll have to watch to find out.

Where the series and film primarily diverge is with their central narratives. While both productions chronicle a revolution, the manner by which the story proceeds varies with medium. The film’s runtime is only two hours compared to the series’ ten episodes. Sustaining the same simple back-to-front action storyline of the film would be near-impossible for that duration.

While there are still several directions the series could have gone (for instance, anthologizing character struggles on various sections of the train), they instead opt for a singular noir murder subplot, which allows Layton to traverse the train and break up the action. But subsuming the vastly more interesting sci-fi concept—the train, the revolution, the separation of class—beneath a cliché crime trope does little for the story. It might just end up leaving most of its viewers (and fans of the film) out in the cold.

LaVar Ball Says 1-On-1 Showdown With Michael Jordan Isn't Happening, 'We Over 50!'