Everything We Know About HBO’s Wild New Stephen King Series, ‘The Outsider’

The time has come for horror fans, TV fans, and book fans alike to rejoice, because HBO just released a new trailer for The Outsider, a 10-part series based on Stephen King’s 2018 best-selling novel, and folks, it looks wild.

Fans have likely seen some promos for The Outsider in recent weeks, as HBO has been including it both before and after episodes of Watchmen and even a little further back with shows like Succession and The Righteous Gemstones. It’s based on a dark mystery novel of King’s that was released in 2018, and heralded as yet another great piece of work. Of The Outsider, The New York Times Book Review complimented King’s ability to continue telling new, fresh stories, even after so many years. “[King] could easily churn out ‘monsters in Maine’ tales until his life ends, and he’d remain well compensated for it,” the Times Book Review wrote. “But he doesn’t do that. He isn’t writing mere imitations of himself. More than 50 novels published, and he’s still adding new influences to his work.”

Consistently topping the charts, HBO took a stab at adapting King’s latest twist on himself, and the network’s intriguing adaptation will hit screens in early 2020.

King has been not only a horror legend, but a literary legend for 45 years by now (his first book, Carrie, was released in 1974). Yet, still, it feels like he’s having something of a moment: both parts of the film adaptation of his novel IT have been massive successes at the box office (the most recent just a couple months ago), and movie adaptations of Pet Semetary, Doctor Sleep, and In The Tall Grass have all come out in 2019. TV isn’t far behind: Hulu is currently in the midst of the second season of their own King-adjacent series, Castle Rock, and his work has inspired some other recent hits, like Netflix’s Stranger Things.

Here’s everything we know about HBO’s The Outsider so far.

When does The Outsider premiere on HBO?

The Outsider will debut with a pair of episodes (an hour each) on January 12th, 2020, with an hour episode each of the eight weeks after that. It sounds far away, but…weirdly, it’s not. That’s the second Sunday in the upcoming new year.

What’s The Outsider all about?

HBO has had great success with crime/mystery stories through the years, most notably of course with the True Detective franchise (starting with Matthew McConaughey and Woody Harrelson, but the most recent season starring Two-time Oscar winner Mahershala Ali). But they’ve also seen success with Amy Adams in Sharp Objects (also based on an acclaimed novel) and John Turturro in The Night Of.

That said, while The Outsider does start as a murder mystery in the vein of those other shows, this is Stephen King, after all. So it shouldn’t take long for things to get a little weird. As HBO’s site describes the story:

And for what it’s worth? Stephen King itself says the series is “one of the best adaptations of my work.”

THE OUTSIDER is one of the best adaptations of my work. Hope you’ll watch it. https://t.co/CcCtdNVn7A

Who’s in The Outsider cast?

The leading role in The Outsider is played by Ben Mendelsohn, who’s without a doubt one of the best actors working today. You may not explicitly know him by name, but you’ve almost certainly seen him as a villain or loose cannon in a number of recent films, including Star Wars: Rogue One (where he played the movie’s main villain, Orson Krennic), Ready Player One (where he played the movie’s main villain, Nolan Sorrento), Captain Marvel, The Dark Knight Rises, and countless more. He also has played a major part on TV before, winning an Emmy for his role in Netflix’s Bloodline.

Mendelsohn isn’t the only draw here, either. For a long time, Jason Bateman was best known for his comedy roles in projects like Arrested Development or Horrible Bosses, but with Netflix’s Ozark, he stepped into the drama/thriller world, and he’ll be remaining there for The Outsider.

Bateman is also an executive producer and director on the series as well (he is behind the camera for the show’s first two chapters). Richard Price (a writer on The Night Of) and novelist Dennis Lehane (who wrote the original Mystic River, Shutter Island, and Gone Baby Gone books) are a part of the show’s writing staff, so you know its in good hands.

Mendelsohn and Bateman will also be joined by Cynthia Ervio (an Oscar contender this year for playing Harriet Tubman in Harriet, who you may have seen in Widows or Bad Times at the El Royale), as well as character actors like Bill Camp (who was also in The Night Of), and Marc Menchaca (a co-star of Bateman’s in the first season of Ozark).

Is there a trailer?

After a few different teasers, HBO recently released their most detailed trailer to date. Check it out below:

HBO has also released a poster for the series: 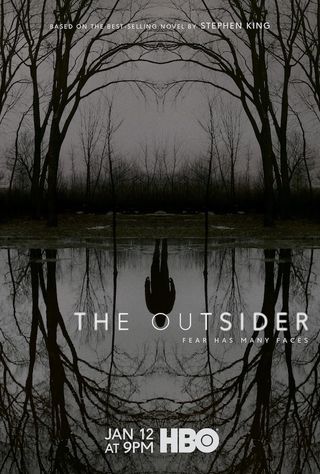 Is The Outsider a full or limited TV series?

The language that HBO has used for the show has indicated that there’s only plans for one single season of The Outsider; it’s based on a 2018 book by Stephen King, after all, which means it’s got a story with a beginning, middle, and end already in place for adaptation here. That being said, that hasn’t deterred HBO before—Big Little Lies was only planned as a single-season limited series, but after that show’s phenomenal reception from critics and fans alike, it was brought back for a second season. The Leftovers also completely covered the ground of the book it was based on during its first season, but continued on for two more behind the brilliant vision of Damon Lindelof (who is now doing basically the same thing with Watchmen).

So while the plan might be for The Outsider to only last for 10 episodes, if all goes according to plan for HBO, the door could always be open for more.

About, Everything, HBO's, Know, We
You may also like: