Gigi Hadid Admits She Had Anxiety About Being A New Mom

Gigi Hadid is sharing a glimpse into motherhood and her life at home with her family. Modeling for the cover of the Harper’s Bazaar’s August Issue, the supermodel admitted that boyfriend Zayn Malik took some time to find his place amongst her famous family.

“At first he was like, ‘How do I get a word in edgewise?’ But now he is very comfortable. He speaks his mind,” the model explained. Sometimes, family dinners can get a bit out of hand, with the ladies pitted against each other and the “Pillowtalk” singer asked to take sides. “When he’s in the middle of a family thing and everyone’s like, ‘Zayn, whose side are you on?’ He’s charming,” she says. The former “One Direction” member knows what to do. “He’s usually on my mom’s side,” Hadid jokes. “So he’s smart in that sense.” Hadid notes that her role in family discussions is the “brain” because she’s “pulling up charts and infographics” and “speaking very calmly”  while her sister Bella is the “heart” who leads with emotion and compassion. As for her mom Yolanda, Gigi describes her as “very Dutch and to the point.”

Gigi — who she welcomed daughter, Khai, in September 2020 — is enjoying motherhood, gushing that her 10-month-old loves birds, animals, museums, and the outdoors. She plans to teach her daughter how to horseback ride just like her, noting that the activity is “pretty spiritual.” As the new mom continues to reflect on her pregnancy, she is opening up about her anxiety and what she did to soothe it. 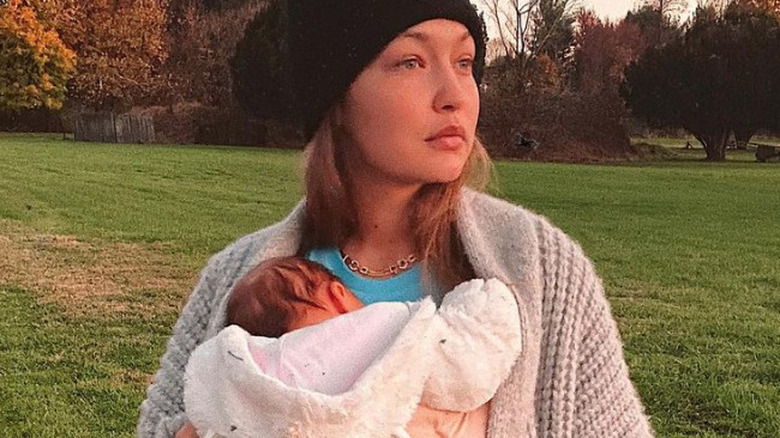 Gigi Hadid is opening up about her anxiety surrounding motherhood. While sitting down with Harper’s Bazaar, the runway model revealed she took up journaling as an emotional release and a way to chronicle her first pregnancy. “During my pregnancy, I had one journal that I called my good journal and one journal that I called my bad journal,” she revealed. “They weren’t that literal, but one was more for the memories, for Khai. Maybe one day I’ll give her the bad journal just to be real about it.”

The new mother adds that the “bad” journals documented her “anxieties and days where I felt like, ‘Am I good enough to be a mom?'” Hadid explained, “I didn’t want to feel guilty about feeling those things or writing those things down. I just liked the separation.” Hadid notes she enjoys other creative activities like drawing that allow her to “recharge” and have some peace and quiet. “I also have sketch pads where I’ll watercolor-sketch, and sometimes I end up writing there too,” she explained.

The 26-year-old admits she deals with a lot of things in her life through “sitting and thinking and writing,” joking that she was well prepared for quarantine. “People made jokes when Covid hit, like, ‘Oh, Gigi, you’ve been practicing quarantine for years now,’ because when I had a few days off, I would drive to the farm from the city and be with myself in my little cabin, making a resin chair or drying flowers.”

admits, Anxi, Gigi, Had, Hadid, She
You may also like: