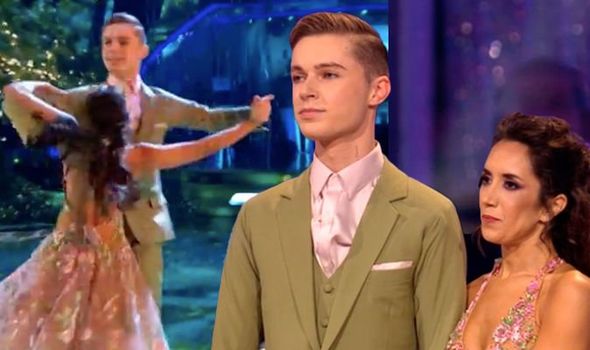 Strictly Come Dancing 2020 sensation HRVY wowed the judges after his Viennese Waltz to Ariana Grande’s Stuck With U with his professional partner Janette Manrara tonight. However, a former professional dancer on the programme gave their verdict on Twitter shortly afterwards, stressing the YouTube star’s ballroom “needs work”.

James Jordan took to Twitter to express his thoughts following his second live performance of the new series.

“I love them together and thought the routine was jam-packed full of content but maybe not enough Viennese Waltz,” he shared with his 270,000 Twitter followers.

“And when he did he didn’t drive enough and any lilt in movement.”

The Dancing On Ice champion went on to reveal: “The tricks and moments apart were great but the proper ballroom needs work #Strictly7.”

Despite this, some viewers revealed they thought HRVY’s marks were well deserved, with one writing: “He was good. Think back to when you were 19.”

Another added: “I think he is a beautiful dancer considering he is so young and has no experience.

“I’m calling him out as the overall winner already I think he will just get better and better.”

James also expressed his thoughts over Jacqui Smith and Anton Du Beke’s Samba to Help Yourself.

“Jacqui She did some proper samba steps and timing was ok…. but there’s no real nice way of saying it was bad,” he wrote.

“She seems lovely though The best part of that routine was when she spent 4 8’s on the swing Not much more to say apart from put more hours in #Strictly3.”

It comes after HRVY admitted he had to rush to the bathroom to be sick after an intense day of rehearsals ahead of his lively jive last week.

Speaking to presenter Zoe Ball on It Takes Two, the singer confessed the energetic performance was a “struggle”.

Billie Eilish Earns First Streaming Songs No. 1 With ‘Therefore I Am’