O’Bryant Robinson who is better known by his Instagram handle iambizzle_ was shot dead in Charlotte.

According to the Charlotte-Mecklenburg Police Department, officers responded to a shooting that occurred near the 800 Block of Potenza Drive after 2:20 a.m. The victim was identified as a 22-year-old Instagram model O’Bryant Robinson. He was pronounced dead on the scene.

IamBizzle was a social media star with over 74,000 Instagram followers and an OnlyFans page where he goes by the moniker Big Bizzle. Robinson had a son and was an aspiring rap musician. He also booked an appearance for acting and other entertainment jobs.

The local police department has not named any suspects or motives in the shotting as the investigation is ongoing.

Robison was seemingly killed shortly after his last post on Instagram and the news was initially met with disbelief. Several tributes began poured in as fans suspected he was a victim of a home invasion. Police have not identified any suspects and he appears to be the only victim in the shooting. 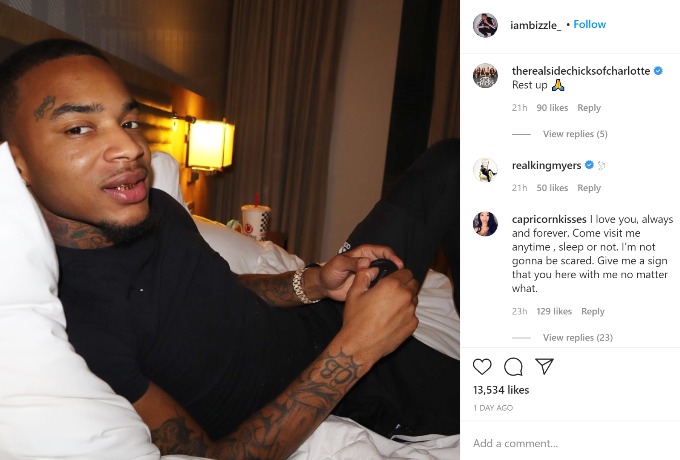 A friend reveals that Bizzle was set to release his album before his untimely death: “My Boy Told Me He Was Just Finna Drop His Tape Smh Shit Crazy iambizzle_ Love Ya Bro No More Late Night On That Call Of Duty My Ni**a 4L ‼️”

The late social media star released one single on Spotify but had bigger plans for his career in entertainment.

According to local reports, Robinson is the 98th homicide victim in Charlotte this year in a wave of violence in the city. He is survived by his son.

Key Glock is not dead

Due to Robison’s resemblance to Young Dolph protégé Key Glock, many fans thought the Memphis rapper was the victim of the shooting that occurred in Charlotte. The Russian Cream rapper did not respond to his death rumor but tweeted shortly after he began to trend over speculation that he was dead.

“Roses are red and this bankroll on me BLUE,” Glock tweeted seemingly in response to the rumor that he passed away.

There is no known connection between the late social media star and the Memphis rapper. Glock is the cousin of Young Dolph and the duo has released the popular mixtape Dum and Dummer last year. Glock followed up with Yellow Tape and Son of a Gun — both released in 2020.

SEBASTIAN SHAKESPEARE: Ella Ross, 24, admits she was deemed too fat