Looking fab! Jennifer Lopez looked fierce in a white cropped sweatshirt and her blinged out water glass in Burbank before she reportedly had dinner with A-Rod at the Bel Air Hotel.

Jennifer Lopez, 51, appears to have changed her hair since splitting with Alex Rodriguez, 45. The “In The Morning” singer stepped out in Burbank, California on Saturday, April 24 showing off her lighter, shorter locks, keeping her eyes hidden behind a pair of large wire sunglasses — see the photos via Page Six here. She rocked a cropped white crew neck sweatshirt and matching, loose fitting sweatpants, finishing the outfit with a chunky pair of beige Timberland boots. Her signature blinged out Starbucks cup was also in hand, which was without her massive engagement ring from the former New York Yankee.

The outing marked her first public sighting since she announced her split from Alex, but it was also just hours before the exes reportedly reunited for dinner at Hotel Bel-Air according to Page Six. The spot is sentimental to both J.Lo and A-Rod as it happens to be the spot of their very first date back in 2017, and is also near Jennifer’s $28 million mansion. “There still seemed to be love and respect there,” an insider said of the Saturday night dinner. 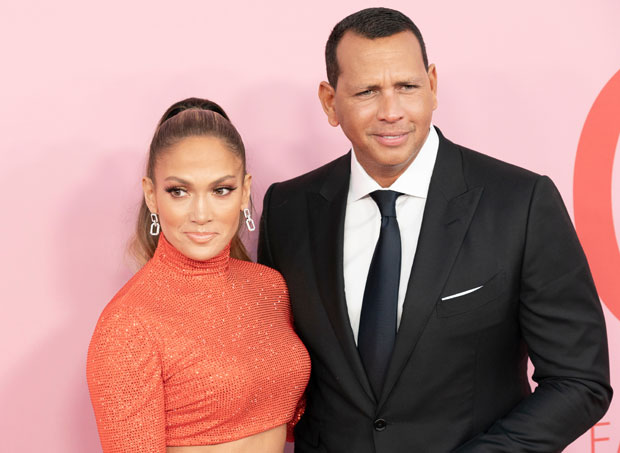 Alex was spotted in his first post break-up photos on Sunday, April 18 stepping off of a private plane in Hartford, CT. The former baseball pro was seemingly headed to ESPN’s studio to report for work on show Sunday Night Baseball, which he regularly appears on. He sported a white golf shirt, face mask and chinos as he held onto a black duffle bag.

Jennifer and Alex sadly confirmed their split in a joint statement just days ago. “We have realized we are better as friends and look forward to remaining so,” they said to the TODAY show on April 15, noting they want to “continue to work together and support each other on our shared businesses and projects.” The duo were fairly intertwined in each others lives given the close relationships to each others’ kids — including his daughters Natasha, 16, and Ella, 13, and her twins Max and Emme, 13. Despite the end of their two year engagement, Jennifer and Alex also said they “wish the best for each other and one another’s children.” Recently, Jennifer did wish Ella happy a 13th birthday on social media.

Prior to the official break up, rumors began swirling that Alex had began an online relationship with Southern Charm star Madison LeCroy, 30. Shortly after, Jennifer and Alex released a statement that they were “working through some things” and the singer appeared to mock split headlines via an Instagram post. Alex then appeared to fly out to the Dominican Republic where Jennifer was shooting Shotgun Wedding, seemingly in an effort to smooth things over. The now-exes were seen kissing and laughing on the trip, but the happiness was short lived as they split for good just weeks later.