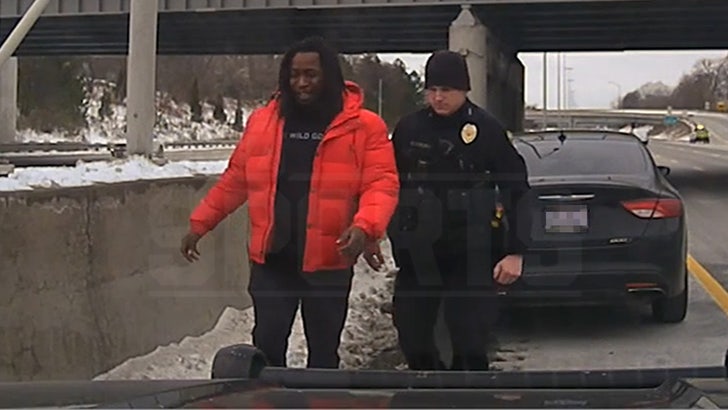 Kareem Hunt had an open vodka container in his car, admitted he’d fail a drug test and was chastised by a self-proclaimed Browns fan cop during his speeding stop last week … this according to new bombshell police video.

… Oh, and Ray Rice‘s elevator incident was brought up during the pullover too.

The footage, obtained by TMZ Sports, shows 24-year-old Hunt bolting down a freeway in his Chrysler in Rocky River, Ohio on Jan. 21.

You can see in the video, the Cleveland Browns running back blows by an officer … quickly slams on his breaks and then is immediately pulled over to the side of the road.

The cop gets Kareem out of the car … and while police audio doesn’t pick up their conversation at that point — it’s pretty clear Hunt is emotional.

He frustratingly gestures to the cop … and once he gets into the back of the squad car — he appears to be sobbing over the stop.

“I just — it stresses me out,” Hunt later added. “I lost everything already, sir. I’m just trying to be in my hometown and chill.”

The officer explained to Hunt that his car smelled like weed … and when he went back to search the car — he told Hunt he found pot in a backpack with Kareem’s name on it. 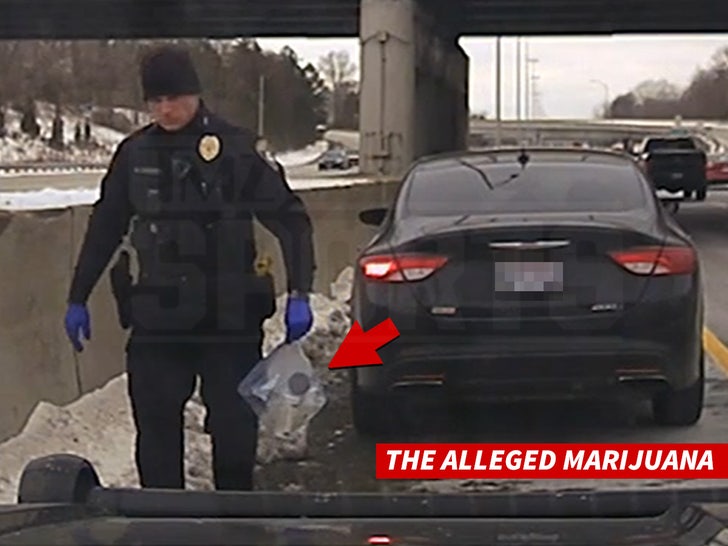 The cop also told Hunt he found an open container of vodka in the same book bag.

The 2 had a long conversation in the squad car … with the officer — who tells the NFL star he’s “one of the hugest” Browns fans — criticizing Kareem for putting himself in the situation.

“You had a good second part of the year,” the officer says. “You don’t want to screw that up over some weed.”

The two went back and forth over who the weed belonged to … but ultimately, Hunt admitted to the officer he’d fail an NFL drug test if one were administered to him at the time.

The officer scolded Kareem for “pissing” on his second chance in the NFL … and even brought up Ray Rice.

“Look at the Ravens running back — what happened to him? Rice. I mean, dude, I’m shocked that you got a second chance.”

Hunt was emotional during the entire talk … and at one point lamented not being able to play for his former Kansas City Chiefs team in the Super Bowl this weekend.

“It hurts my soul. You don’t even understand. I’ve been fighting a lot of sh*t lately. It still hurts me to this day.”

Ultimately, the cop seized the weed … but let Kareem off with just a speeding ticket and sent him on his way.

The cop did say the weed will be tested and prosecutors could later charge Hunt with possession … but Hunt was grateful for the cop nonetheless, praising him for “being down to earth.”

We’ve reached out to the Rocky River Police Dept. over the cop’s seemingly lenient stance toward Hunt during the stop … but so far, no word back yet.

The Cleveland Browns released a statement on the pullover last week, saying they were “aware and looking into it.”

Hunt is a Browns restricted free agent this offseason.