Michael B. Jordan Calls for Hollywood to Support Black Talent

Actor Michael B. Jordan gave a powerful speech at a Black Lives Matter demonstration in Los Angeles on Saturday, including an immediate call to action for the entire entertainment industry to be more inclusive and supportive of black people. Jordan put Hollywood “on notice,” stating the need for agents and producers to use their power to uplift voices and talent which all-too-often are erased or underrepresented.

“We’re in the heart of Hollywood right now,” he said. “One of the world’s most powerful industries. And I’m an active member of that. They need to go on notice. I’ve dedicated my production company to an inclusion rider. But it has to go beyond that. So to the brands that support me, all the productions and the studios… if you have any financial ties to the police, we have to look at our business. We have to stop hiring police. We have to cut off their support. That’s why I’m committing to hiring private security.” 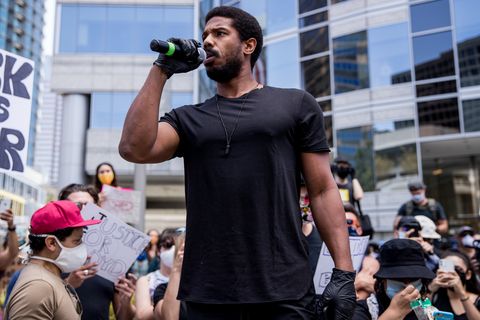 “Anybody that deals with me, if you have racist beliefs, if you have a racist bone in your body, if you’re not with me, if you don’t stand with me and people that look like me, then you don’t need to be with me,” he continued. “I want us to invest in black staff. I’m proud to have an inclusion rider and all that good stuff, and use my power to demand diversity, but it’s time that the studios and the agencies, all the agencies, all these buildings we’re standing in front of, I wish you would do the same.”

He went on to call out the appropriation of black culture in entertainment which has consistently failed to include or reward black creators. “You committed to 50/50 gender parity in 2020, where is the commitment to black hiring? Black content led by black executives, black consultants? Are you policing our storytelling as well? Let us bring our darkness to their light. Black culture. The sneakers, sports, comedic culture that you guys love so much; we dealt with discrimination at every turn, can you help fund black brands?”

Jordan acknowledged in his speech how a number of the roles he has played in his career have had a lasting impact on him and informed the way he thinks about the power of visibility and storytelling. He cited his experience playing Oscar Grant, who was shot in the back by police in 2009, in Ryan Coogler’s Fruitvale Station, as having had a lasting impact.

He also spoke about the lessons he learned while researching and playing the part of real-life social justice attorney Bryan Stevenson in Just Mercy. “I learned his approach to things,” he said. “Very calm. Very strategic. Very thoughtful. You have to be proximal. You have to be close to the issues.” In order to educate viewers on the systemic racism and institutional failures highlighted in Just Mercy, Warner Bros. have made the film available to stream for free throughout June.

b, calls, for, ho, Jordan, Michael
You may also like:

In Case You Were Curious, Karamo Brown and Christine Quinn's Friendship Began on Instagram