Miley Cyrus Calls Liam Hemsworth Marriage an 'Attempt to Save Myself'

Miley Cyrus is opening up about the reason she married Liam Hemsworth. The former couple was together for years before they tied the knot in 2018, a decision that came after their Malibu home burned down. The fire, Cyrus tells Rolling Stone as she poses topless on the January cover, “did what I couldn’t do for myself.”

“It removed me from what no longer was serving its purpose. And then as you drown, you reach for that lifesaver and you want to save yourself,” she explains. “I think that’s really what, ultimately, getting married was for me. One last attempt to save myself.”

In the year or so before the fire and before her wedding, Cyrus says she “was playing house” with Hemsworth, something that “felt really good at the time.” Everything wasn’t as perfect as it appeared, though.

“A couple of years ago, it looked like I was living some fairy tale. It really wasn’t,” she says. “At that time, my experimentation with drugs and booze and the circle of people around me was not fulfilling or sustainable or ever going to get me to my fullest potential and purpose.”

While Cyrus recalls people thinking of her as “pure” during this time, the 28-year-old singer says it was just the opposite. “I was way more off my path at that time than any of the times before where my sanity was being questioned,” she admits.

The marriage ended less than a year after they said, “I do.” Before officially separating, Cyrus expressed her feelings through songwriting, specifically in her 2019 track, “Slide Away.”

“I was still in my relationship, I was still living in my house in Malibu,” she says of writing the song. “That’s why [I sang], ‘I want my house in the hills.’ I wanted out of there, and it says, ‘I don’t want the whiskey and pills.’ I didn’t want to maintain that lifestyle.”

“It’s really weird because I can never figure out what comes first: art or life? Does art imitate life or life imitate art? Or do you speak it into existence? Am I that powerful that when I write something, I become it?” she questions. “I think of making music sometimes as a sacrifice because you end up writing songs that can hurt people, that can hurt one person but make you feel less alone. It’s like, is it worth it? Is it worth writing music that’s so honest?”

Now that time has passed since her marriage to Hemsworth, Cyrus says she has a newfound “healthy perspective.” 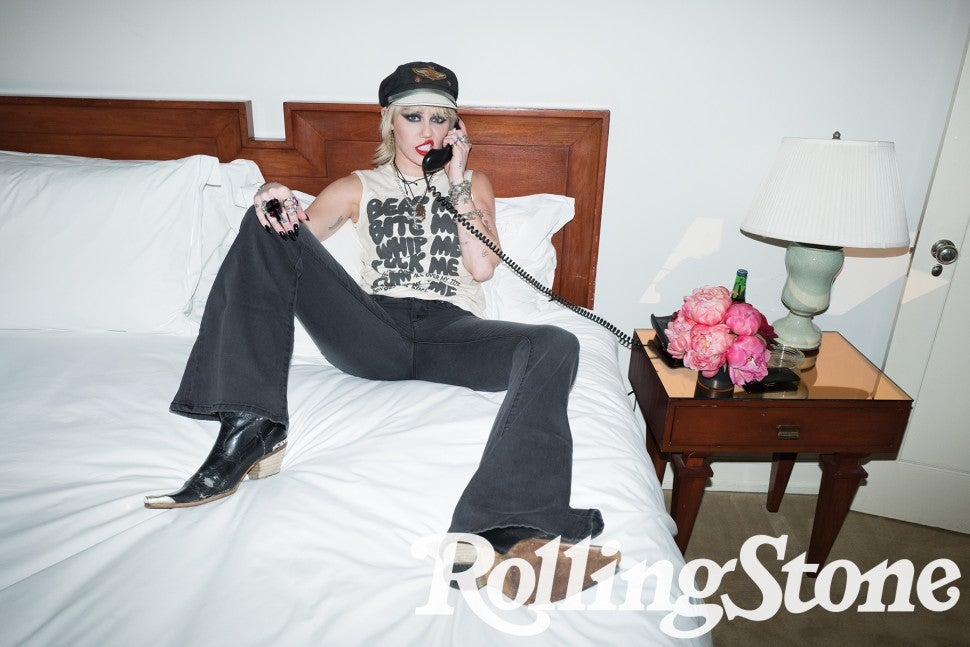 Following the end of her marriage and a surgery on her vocal cords, Cyrus made the decision to give up drinking and drugs.

“One of the reasons I got sober was I had just turned 26, and I said, ‘I got to pull my shit together before I’m 27, because 27 is the time you cross over that threshold into living or dying a legend.’ I didn’t want to not make it through being 27. I didn’t want to join that club,” she says, referring to the number of musicians who have died at 27, including Jimi Hendrix, Janis Joplin and Jim Morrison. “Probably about halfway into 26, I got sober. Then by 27, [November 2019] I was pretty much fully sober.”

Amid the coronavirus pandemic, though, Cyrus says she “fell off” her sobriety and drank alcohol. She did, however, remain drug-free, as she’s been for “years.”

“It was really a struggle. Mental health and anxiety and all that. I lost myself there, and now I’m back on five weeks,” she says of sobriety. “… I try to not be naive. Things f**king happen. But from sitting here with you right now, I would say it would have to be a cold day in hell for me to relapse on drugs.”

Cyrus also notes that, at this point in her life, she takes her “mental and physical health a lot more seriously than I ever did before.”

“I have been focusing on sobriety as I wanted to wake up 100 percent, 100 percent of the time. If I’ve ever learned to balance myself and to not take it too far, I would. But so far any time I’ve messed with that, it hasn’t gotten me what I want,” she says. ” I’m really good at quitting things. I have a weed machine right there. I’ve never smoked out of it, and it’s full. [If] I had a cocaine machine, it might not be full. That’s the thing. I’m really not an addict. You can have that. You’re good.”

Cyrus’ sobriety has helped her to reflect on her past, beginning with her time on Disney Channel’s Hannah Montana, which she starred on from 2006 to 2011.

“I had to evolve because Hannah was larger than life, larger than me. I felt like I was never going to amount to the success of Hannah Montana,” she admits. “…  Hannah Montana was not a character. That wasn’t what the show is about. It was about a normal girl with a f**king wig on. Everything was always in me. The concept of the show, it’s me. I’ve had to really come to terms with that and not be third-person about it.”

Following her days on Hannah Montana, Cyrus began to grow up publicly, but was criticized by tabloids, slut-shamed online and not viewed as a serious artist.

“The music was driving it, but all those things from that era, especially with [2013’s] Bangerz, the pop-culture moments almost eclipse the music itself,” she says. “… I remember comments saying, ‘Why the f**k do you distract everybody with getting naked and shaking your ass when you’re a fucking talented-ass singer?'”

“… I love show business. I love entertainment. I love pop culture. I love unforgettable moments. I think there was a balance of me just loving making big media moments but also a sadness in the fact that I would think, ‘Did anyone even hear my song?'” Cyrus continues. “When you think of [2013’s] ‘Wrecking Ball,’ you don’t think of the pain. You don’t think of me looking directly into the camera, breaking the wall, crying, reaching out. You remember me getting naked, and I don’t know whose fault that is. I don’t know if that’s mine or the way that our brains are programmed to think sexuality, for lack of a better word, trumps art.”

Cyrus says that the media’s focus on her sexuality as a teen was “f**ked up” and left her with “some trauma,” something she’s only recently started to understand.

“In the past two years, I think, we’ve made some big progress, especially toward women and bodies. I don’t even know if you really can slut-shame now. Is that even a thing? The media hasn’t really slut-shamed me in a long time,” she says. “At one point I was like, ‘Yo, when I’m 16 and you’re circling my boobs and shit like that . . . I’m the bad guy?’ I think people are starting to go, ‘Wait, wait, wait. That was f**ked up.’ They’re starting to know who the enemy and who the victim was there.”

As for Cyrus’ parents, Billy Ray and Tish, they handled her negative media attention differently.

“My dad ignored it because it’s just like any teenage girl and their dad’s like, ‘Let’s please not have this conversation.’ My mom, I think it made her really angry,” Cyrus shares. “I think even she felt it could be distracting from what I was doing. She knew the voice and talents that I could showcase. She was like, ‘What the f**k? You have the biggest song. Can you just make it about the song? Why do you have to make it about being a stripper?'” 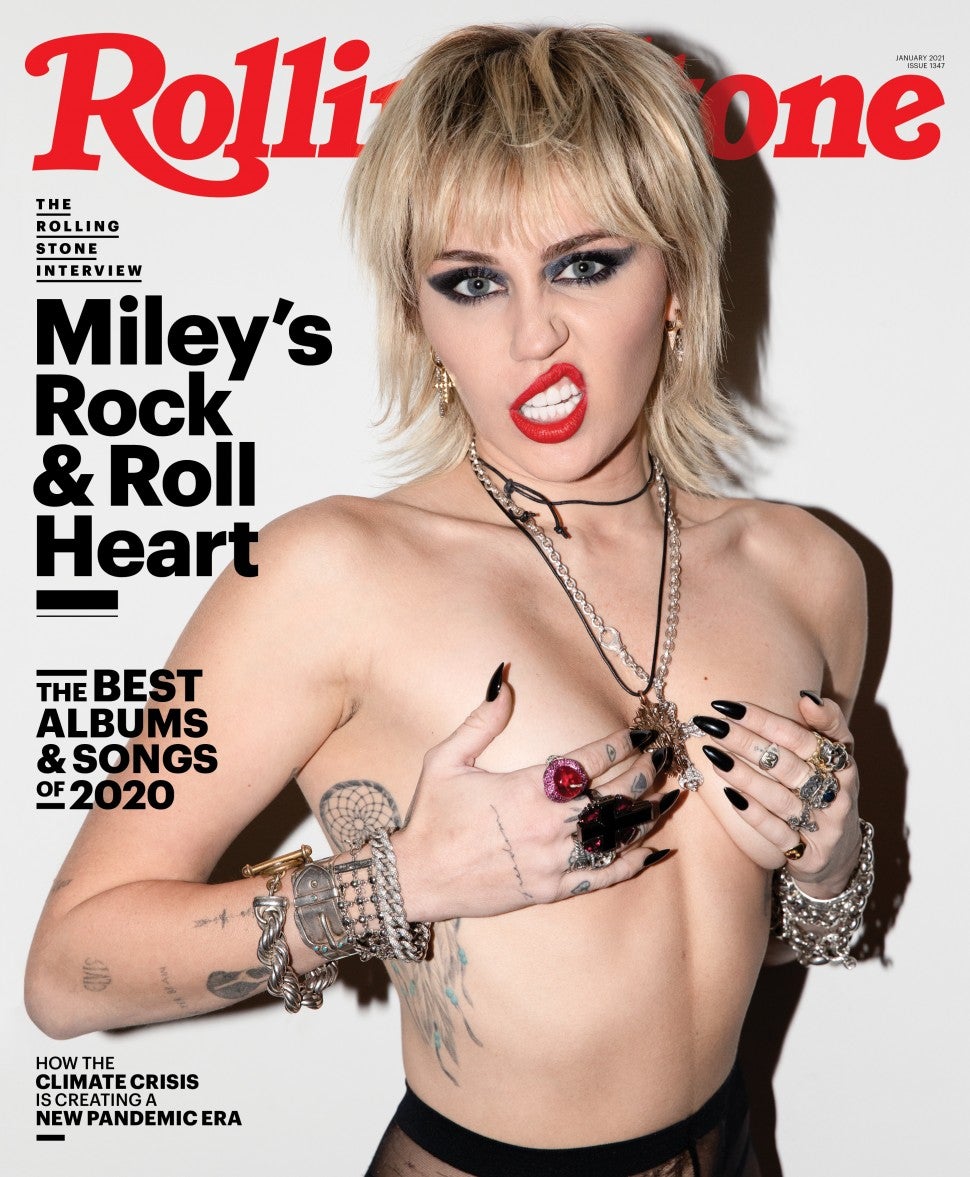 Cyrus’ time in the spotlight for things other than her music led her to “discredit” herself “almost every step of the way.”

That’s the place she finds herself now, following the release of her latest album, Plastic Hearts. “I guess I’m just in love with the fact that for once it feels like it’s really focused on the music,” she says.

“I’m so settled in what I’m doing and who I am. All I’ve ever wanted is respect as an artist and to have pride in what I make,” Cyrus says. “I think that comes with the dedication and diligence that I really put in the effort. I put in the work.”

“You get to a point where numbers and headlines don’t do the same chemical reaction to your brain they do in the beginning. There’s actually a release of dopamine that gets dumped into your skull when people are raving about you or when you walk by a magazine stand and you’re on every cover,” she continues. “Finding the balance I have now has made it much easier for me. It completely ate up that fear and spit it out.”

Now that she feels content in herself and her life, Cyrus is thinking about how she wants to be remembered.

“I want to lay down a new stone for a path for the next generation of artists, philanthropists, the way that Debbie Harry has done for me,” she says. “I’d like to be known as someone that created something that didn’t quite exist, or that I delivered something that no one knew that they needed or wanted, but when they had it felt that they couldn’t live without it. That’s what I would want as an artist.”

“But I have no idea how the f**k I’d want to be remembered,” Cyrus continues. “I’m a pretty wicked daughter. I think I’m f**king very dedicated to my family. I feel like I’ve fought for what I really wanted, whether that’s fighting for rights, or against injustices, working with Happy Hippie Foundation. I’d want that to be a priority. I’d want to have been a trailblazer.”

Cyrus concludes, “I think it’s really hard talking about it because I’m still so here with so much left to do. I couldn’t really tell you how I’d want to be remembered because all the things that I’d hopefully be remembered for haven’t happened yet.”

Liam Hemswo, Miley Cyrus, News
You may also like: