Naomi Osaka Honors Tamir Rice Ahead of US Open Finals

After boycotting a previous tournament match to show her support for the victims of police violence, Naomi Osaka is taking more steps to raise awareness during the US Open.

The Japanese tennis star — who is currently the highest-paid female athlete in the world — has worn a mask honoring Black victims of police brutality and racial injustice at each of her US Open showings at the USTA Billie Jean King National Tennis Center in New York.

At Saturday’s finals match against Victoria Azarenka of Belarus, Osaka showed off her final mask of the tournament, honoring Tamir Rice, who was just 12 years old when he was shot at a park in Cleveland, Ohio, by Officer Timothy Loehmann on Nov. 22, 2014. Rice died the following day.

Making a statement each and every match. pic.twitter.com/LWskFdTPfC

Osaka’s boyfriend, rapper Cordae, was in the stands to cheer her on during the championship match, sporting a t-shirt that read, “Defund the police.” 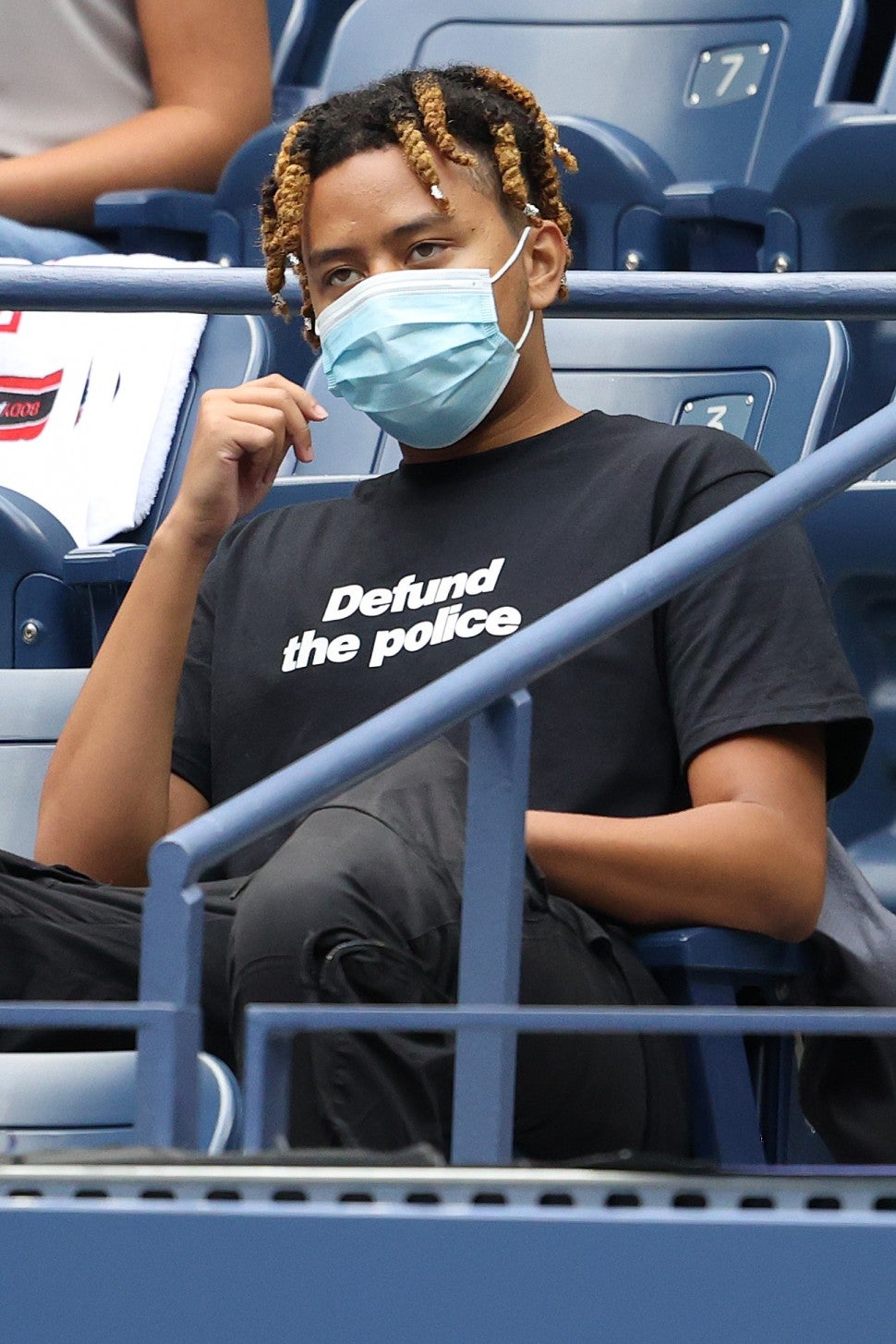 On Thursday, Osaka honored Philando Castile by wearing his name on her sixth mask for her semifinals match. On July 6, 2016, Castile, a 32-year-old Black man, was fatally shot during a traffic stop by police officer Jeronimo Yanez, a member of the St. Anthony, Minnesota, police department.

A few days prior, Osaka took the court for her quarterfinal matchup, sporting a black face mask emblazoned with George Floyd’s name.

Floyd, a 46-year-old Minneapolis man, died on May 25 after police officer Derek Chauvin pressed his knee into Floyd’s neck for eight minutes and 46 seconds. His death sparked a nationwide movement against police brutality and racial injustice.

After her match with Shelby Rogers, which advanced her to the semifinals, Osaka was surprised with messages from both Trayvon Martin’s mother, Sybrina Fulton, and Ahmaud Arbery’s father, Marcus Arbery Sr., after she wore the names of their sons on masks during prior matches.

At Sunday’s round of 16 match, she paid tribute to Martin, a Florida teen who was shot and killed in 2012 by neighborhood watchman George Zimmerman, who was later acquitted of the killing.

“I just want to say thank you to Naomi Osaka for representing Trayvon Martin on your customized mask, and also for Ahmaud Arbery and Breonna Taylor,” Fulton told Osaka in a moving clip. “We thank you from the bottom of our hearts. Continue to do well, continue to kick butt at the US Open.”

Actually I have a lot to say about this. I remember Trayvon’s death clearly. I remember being a kid and just feeling scared, irreverent info but I actually didn’t wear hoodies for years cause I wanted to decrease the odds of “looking suspicious”. I know his death wasn’t the first, but for me it was the one that opened my eyes to what was going on. I remember watching the events unfold on tv and wondering what was taking so long, why was justice not being served. To see the same things happening over and over still is sad. Things have to change.

Actually I have a lot to say about this. I remember Trayvon’s death clearly. I remember being a kid and just feeling scared, irreverent info but I actually didn’t wear hoodies for years cause I wanted to decrease the odds of “looking suspicious”. I know his death wasn’t the first, but for me it was the one that opened my eyes to what was going on. I remember watching the events unfold on tv and wondering what was taking so long, why was justice not being served. To see the same things happening over and over still is sad. Things have to change.

For Osaka’s third round mask, she wore the name “Ahmaud Arbery.” Arbery was killed on Feb. 23 after he was chased by three white men while jogging. Travis McMichael, his father, Gregory McMichael, and their neighbor, William “Roddie” Bryan, were indicted by a grand jury for the murder of Arbery in June.

Arbery’s father said his family “really, really appreciated” the gesture. “Thank you for the support of my family and God bless you for what you’re doing and you’re supporting our family with my son,” he said.

After seeing the video, Osaka admitted to reporters that she was “trying really hard not to cry.”

“It means a lot,” she expressed. “They’re so strong. I’m not sure what I would be able to do if I was in their position. I feel like I’m a vessel at this point in order to spread awareness and it’s not going to dull the pain, but hopefully, I can help with anything that they need.”

Osaka added, “It’s extremely touching that they would feel touched by what I’m doing.”

"I feel like I'm a vessel at this point in order to spread awareness."

Trayvon Martin's mother and Ahmaud Arbery's father thanked Naomi Osaka for representing their sons on the masks she's been wearing throughout the US Open. pic.twitter.com/0IHBU7pvx4

Following her match and victory against Ukraine’s Marta Kostyuk, Osaka explained to reporters why she was wearing the face coverings. “This did not have to happen, none of these deaths had to happen. I just want everyone to know the names more,” she said.

At her second round match, Osaka honored Elijah McClain, a 23-year-old Black man who died last year after officers in suburban Denver put him in a choke hold and paramedics injected him with a sedative.

Naomi Osaka is wearing an Elijah McClain mask before her second-round match at the @usopen. pic.twitter.com/E7mx38QhUH

In the first round, she wore a mask in honor of Breonna Taylor, a 26-year-old EMT who was killed on March 13 in her home in Louisville, Kentucky, by Louisville Metro Police. She and boyfriend Kenneth Walker were in their own home when police made a late-night raid on the wrong address, looking for someone who had been taken into police custody hours earlier. Taylor was shot eight times. Though one officer was fired months after the incident, none of the officers involved have been arrested or charged.

“It’s quite sad that seven masks isn’t enough for the amount of names, so hopefully I’ll get to the finals so you can see all of them,” Osaka said last Monday.

[email protected] walked out in a Breonna Taylor mask for her night match at Arthur Ashe stadium.#USOpenpic.twitter.com/Ubxwst54kl

“I’m aware that tennis is watched all over the world, and maybe there is someone that doesn’t know Breonna Taylor’s story. Maybe they’ll, like, Google it or something,” Osaka added. “For me, (it’s about) just spreading awareness. I feel like the more people know the story, then the more interesting or interested they’ll become in it.”

The tennis star sat out her semifinal match at the Western & Southern Open last month, following the police shooting of Wisconsin man Jacob Blake in protest against racial injustice and “the continued genocide of Black people at the hand of the police.”

“Before I am an athlete, I am a Black woman. As a Black woman I feel as though there are much more important matters at hand that need immediate attention, rather than watching me play tennis,” Osaka wrote a statement posted to her social media accounts on Wednesday.

“Watching the continued genocide of Black people at the hand of the police is honestly making me sick to my stomach,” continued the athlete, who grew up in the United States, but represents her mother’s home country of Japan in international competition. “I’m exhausted of having a new hashtag pop up every few days and I’m extremely tired of having this same conversation over and over again. When will it ever be enough?”

“I don’t expect anything drastic to happen with me not playing, but if I can get a conversation started in a majority white sport I consider that a step in the right direction,” she added.

However, Osaka ultimately returned to the event to defeat Elise Mertens in the rescheduled semifinal match, before pulling out of the final match due to injury.

“I was (and am) ready and prepared to concede the match to my opponent,” she said in a statement prior to her semifinal. “However, after my announcement and lengthy consultation with the WTA and USTA, I have agreed at their request to play on Friday. They offered to postpone all matches until Friday and in my mind that brings more attention to the movement. I want to thank the WTA and the Tournament for their support.”

Osaka joined many major athletes with her decision to sit out from major competitions in protest. Milwaukee Bucks players didn’t take the court for Game 5 of their first-round NBA playoff series against the Orlando Magic, which led to a league-wide boycott and rescheduling of finals games and the announcement of new social justice and voting initiatives by the league. Players from the WNBA, MLB, MLS and more also boycotted competition in solidarity.

See more on the continued protests in the video below.

black lives matter, News, Spor
You may also like: