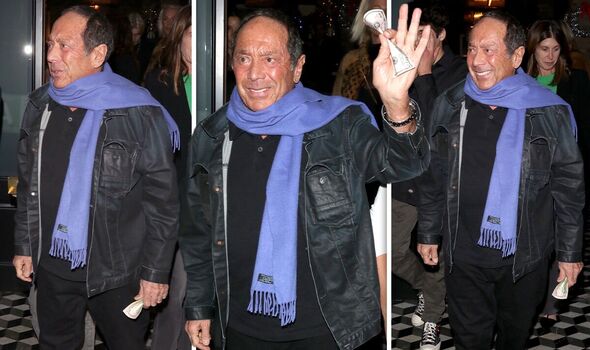 Paul Anka, 81, looks youthful in casual wear while waving to fans after a meal with family

Paul Anka looked great as he was pictured this week leaving a Los Angeles restaurant with his family. The singer looked younger than ever as he left the prestigious event in casual wear.

Paul Anka, 81, looked younger than ever as he posed for pictures as he exited the prestigious Los Angeles restaurant Craigs this week.

The Hollywood star was joined by his family as they enjoyed a bite to eat to wish for the festive season.

He went for a casual look in black jeans a black polo shirt, and a fashionable leather-washed black denim jacket.

Adding colour to the ensemble, Paul went for a lilac scarf, with the singer making sure to take a moment to smile for the paparazzi.

He looked very youthful as he posed holding a money note in his hand as he exited the restaurant along with his grandchildren.

Paul Anka went for a casual stylish look, showing off his fashionable ensemble as he left Craigs in Los Angeles. The Put Your Head On My Shoulder hitmaker went for a black polo top, and trousers paired with a stylish black leather jacket.

Paul Anka added a touch of colour with his scarf

Paul Anka went for an all-black ensemble but was sure to add a touch of colour with his light purple scarf as he made a stylish exit from the restaurant.

Paul Anka has previously shared the secret to his youthful appearance

In recent years, Paul Anka has spoken openly about why he has lived longer than his contemporaries. He told AARP: “Eating properly and exercising, and mentally keeping myself in the right place with the right kind of pressure: It’s worked for me.”

Paul Anka continued to AARP: “I’ve been protective of my body for the last 40-some years. If you do that and stay active, you have a shot at having a real, unfettered life, and keeping the brain working. I’ve seen too many guys retire, even Frank, and they sit around counting their money and they just die. They throw dirt on you if you stand still, and I’ve been afraid of that. I just keep moving and doing what I’m doing.”

Paul Anka said to AARP that he believes that by doing a job he loves, he has been able to live longer. He said: “If you’re fortunate enough to do something that you do love, if you have a passion, then you’re never working a day in your life. And that’s me since I’m 16.” Also quitting smoking, as Paul did, is known to lower your risk of cancer, heart disease, strong and emphysema, as well as a host of other benefits.

Paul Anka has been married three times and has a total of six children. Most recently, in October 2016, Paul married Lisa Pemberton in Beverly Hills, California. They however divorced in 2020. He has also been married to Anna Anka (2008-2010) and Anne De Zogheb (1963-2000).