Erika Jayne, 49, has seemingly responded to the latest news around her and estranged husband Tom Girardi, 81. The ultra-glam Real Housewives of Beverly Hills star stunned in a new red carpet-ready photo in an asymmetrical black gown as she posed with one hand on her hip. “High drama,” she wrote alongside the tweeted photo, shared on Wednesday, Dec. 2. The blonde kept her long hair straight and sleek in the snap, rocking her signature smokey eye, nude lip and perfect manicure.

While she didn’t give any context to the post (or the caption), fans immediately thought it was response to both her split, as well as a class action lawsuit alleging fraud that was reported by The Blast. Erika and Tom’s split after 21 years of marriage came as a shock to Housewives fans last month, which the “XXPEN$IVE” singer confirmed via a statement on Tuesday, November 3.“After much consideration, I have decided to end my marriage to Tom Girardi,” Erika said to news outlets.

“This is not a step taken lightly or easily. I have great love and respect for Tom and for our years and the lives we built together. It is my absolute wish to proceed through this process with respect and with the privacy that both Tom and I deserve. I request others give us that privacy as well,” she also said. Erika’s marriage to Tom was her second: she was previously wed to Thomas Zizzo, the father of her son Tommy, 29, from 1991-1996. Erika rarely shares photos or talks about her son, who is a police officer, but she shared a sweet in-uniform snap of him in May. “People say we look alike,” she penned in the caption. 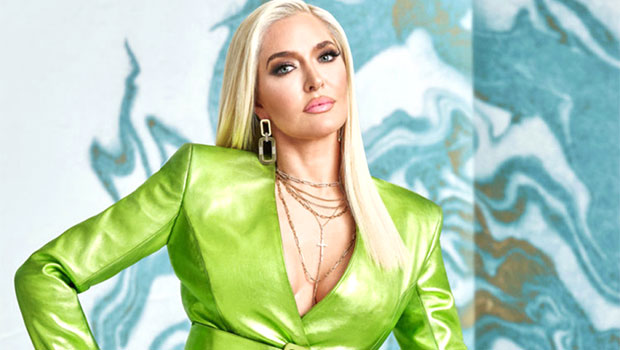 While the couple seemed like one of the more solid marriages in reality TV, fans have pointed out on social media that Tom never made it to her Chicago show on Broadway. Her fellow cast mates — including Lisa Rinna, Kyle Richards, Teddi Mellencamp, and Garcelle Beauvais — went to see her performance of Roxie in a season 10 episode, where Erika noted that Tom would be coming to the final show. Sadly the trip never happened due to the COVID-19 pandemic.

Despite the sad news, Erika seemed to be in good spirits in her first outing since the split on Nov. 19. The reality star looked glam in a $12,000 Fendi logo jacket as she met up with friends for dinner at Italian restaurant Fia in Santa Monica, California. She paired the pricey bomber with a fitted black knee-length skirt and sexy boots, showing off her glam hair and makeup.

Erika Jayne, The Real Housewiv
You may also like: