MSNBC’s election superstar made an appearance on NBC 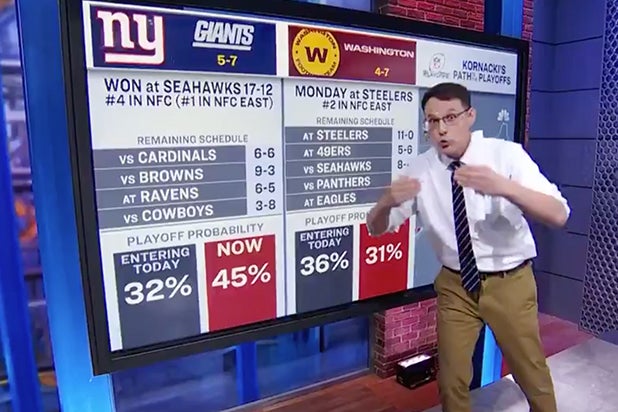 If you’ve been suffering from Steve Kornacki withdrawal these last few weeks since the election was called, this is the video for you (assuming you like football at least a little bit).

MSNBC’s king of the big board traded politics for football on Sunday night, making an appearance on NBC’s “Sunday Night Football” to help break down the NFC playoff picture.

Kornacki first broke down football’s worst division, the NFC East, and explained how the New York Giants took a big step towards making the playoffs after their 17-12 upset win over the Seattle Seahawks.

He then shifted his attention to the final Wild Card spot in the conference, where the Minnesota Vikings laid claim to the spot today after their win over the Jacksonville Jaguars (coupled with the Arizona Cardinals’ defeat to the Los Angeles Rams).

Steve Kornacki, we’ve missed you so much.

breaks, down, Kornacki, Steve, the
You may also like:

Ally Brooke Claims She Was Mentally & Verbally Abused While in 5H