Follow
Home » Celebrities » Tayla Parx reveals Ariana Grande has reunited her ‘Thank U, Next’ collaborators to work on her new album: ‘I can’t wait for the world to hear it’ 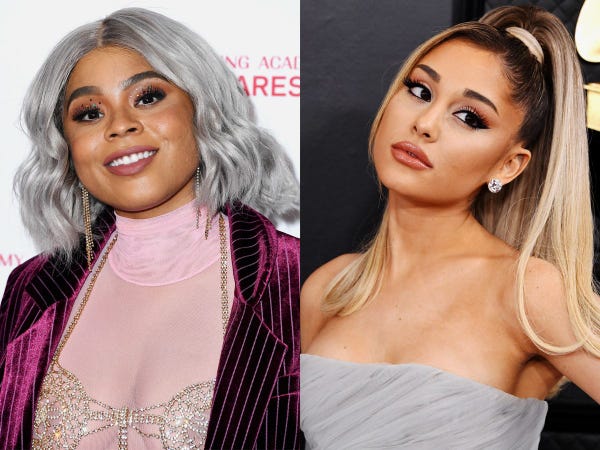 Tayla Parx has revealed that Ariana Grande's sixth album is very much underway.

In a recent interview with Insider, the 27-year-old singer-songwriter shared that she's been in the studio with Grande, "working on the new record."

"The 'Thank U, Next' crew did get back together over quarantine — after like, five COVID tests, literally," Parx said. "We just kind of let it happen naturally, same way as the last album."

Parx and Grande originally met as teenagers, since both were actors on Nickelodeon.

first wives club 2018 …… @theellenshow tomorrow 🖤 i love you @victoriamonet @taylaparx … thank u, next

"I think she has to tell you more about [the album] herself, but I can tell you she's made, yet again, another evolution," Parx said when pressed for details.

"And that's what I'm here for, that's the type of music that I want to create with artists," she continued. "Music that allows them to show different sides of themselves with each project. And we're just going to get to know her even more this time around, which I'm really excited for the world to see."

"I'm excited for her to tell you guys just more about where her head was at with this project, because it truly is incredible, honestly, and I can't wait for the world to hear it."

Grande herself has shared minimal details about new music and has yet to even confirm that she's working on a new album.

She did, however, share a brief snippet of vocals on September 14 before disappearing from social media. She captioned the post, "brb."

Back in March, Grande also teased a new song called "Nasty," which she promised fans would be released eventually — though at the time, she also said "new music is still a long time away."

But even without releasing solo music, Grande has broken multiple major chart records this year with her Justin Bieber collaboration, "Stuck With U," and Lady Gaga collaboration, "Rain On Me."

For her part, Parx will release an EP of covers in the coming months and told Insider to expect her sophomore studio album, "Coping Mechanisms," before the end of this year.

Ariana Grande, Mus, Tayla Parx
You may also like: