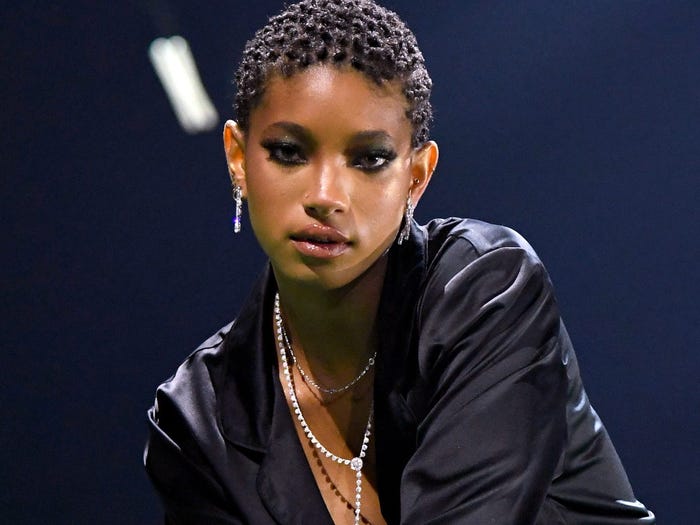 Willow Smith opened up about participating in Rihanna's star-studded Fenty x Savage show earlier this year and said it was her first time ever wearing lingerie.

"You really stepped into your womanhood this year," Jada Pinkett Smith said to her 20-year-old daughter during the latest episode of "Red Table Talk" on Facebook Watch. "You basically showed the world your transformation during your Fenty strut."

On the latest episode of the hit talk show, cohosts Smith, Pinkett Smith, and Adrienne Banfield Norris sat down with guests who underwent weight-loss transformations.

But before that, Smith spoke about how she gained more confidence in 2020 after walking in the show — which featured stars like Cara Delevingne, Demi Moore, Lizzo, and Paris Hilton.

Smith said that when she arrived at the show, the atmosphere felt "super hot and heavy" and she was a bit intimidated.

"As soon as I got in there, I was like, 'Oh God, maybe I can't handle this. Maybe this is not my place," she said. "That comes from my insecurity. But I put on the clothes and I looked at myself and said, 'You're gonna go out there and you're gonna vibe it out."

Pinkett Smith also recalled her daughter FaceTiming her during the wardrobe fitting and showing off the outfit.

"I had never worn lingerie in my entire life," Smith said. "[That was] my first time, in front of the whole world, ever wearing lingerie."

"I just felt like I was so empowered," she added, calling 2020 "the year of me becoming a woman."

Smith went on to say that her goal is to "continue to get more confident and just get more comfortable in my skin."

"I'm just proud of the young woman you're becoming," Pinkett Smith said to her daughter.

Celebrities, Red Table Talk, W
You may also like: