Follow
Home » Lifestyle » ‘A glorious run’: closure of Picture and People magazines the end of an era

‘A glorious run’: closure of Picture and People magazines the end of an era

When you walk into the lobby of Bauer Media on Park Street in Sydney's CBD, the walls display the front covers of nearly every magazine published by the company.

It’s a tradition dating back to the hey day of magazines, when it was Kerry Packer’s Australian Consolidated Press.

But two longstanding titles did not have wall space even though they once made the company a lot of money – the raunchy men’s magazines Picture and People. 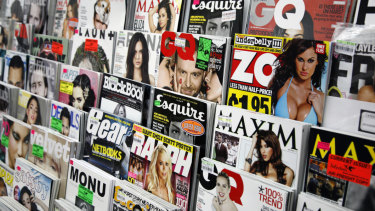 The closure of many men’s magazines exposes the weakened state of magazine publishing.Credit:Anna Kucera

Now Bauer has announced the titles will close by the end of this year, after activists successfully campaigned for key retailers to stop selling them. The magazines had lost distribution, "which has affected their commercial viability” a statement from the publisher says. “[Other factors include] it not being strategically aligned with Bauer Media.”

Former Zoo editor Paul Merrill says the decision is a victory for activists opposing the publication of the nude or topless photos that was People and Picture’s stock in trade.

At the same time, it exposes the weakened state of magazine publishing, which has lost thousands of readers to the internet across all genres.

“With the #MeToo movement in full flow, [the magazines’] days were always going to be numbered,” Merrill says. “I guess now you can really get everything you need on the internet. They served their purpose and they had a glorious run for about 20 to 25 years but they came to a natural conclusion.”

The activist group behind the campaign is Collective Shout, which opposes the objectification and sexualisation of women and girls. The group has campaigned against M-rated magazines before with some success and took up the cause again this year to highlight “sexist” and “demeaning content” in Picture and People specifically.

“The way they talk about teenage girls is really chilling,” Liszewski says. “I've got a teenage daughter and the thought of her going to a store and being in the store with a man who is buying this magazine just creeps me out completely, it’s just not acceptable.”

Liszewski says the federal government’s National Plan to Reduce Violence against Women and their Children recognises that sexual objectification and sexism creates a culture of violence against women.

Within days of Collective Shout raising the issue on social media, BP decided it would no longer sell the magazines in its 350 company-owned service stations. “Members of our team discussed the concerns raised and made the decision to no longer make those titles available at our sites,” a BP spokeswoman says. “It just felt like the right thing to do for our business, particularly with respect being one of our company values.”

Coles Express has now followed suit, while convenience chain 7-Eleven removed them from its 700 stores earlier in the year, also after pressure by Collective Shout.

Picture and People are joining a roll call of men’s titles that have fallen by the wayside: Playboy Australia ceased print publication in 2000 though the US edition is still sold; Ralph closed in 2010; Loaded, FHM and Zoo in 2015. Maxim and Inside Sport still exist. Penthouse Australia is also clinging on, despite bankruptcy proceedings over alleged debts.

Professor of media at Macquarie University Catharine Lumby says the various titles existed “on a spectrum” running the gamut from “serious intellectual fiction and articles” to “tongue-in-cheek tabloid humour” for a working-class audience.

While she calls the “gag reflex” coverline highlighted by Collective Shout “humourless and misogynistic”, she says it would be a mistake to dismiss all of the magazines in every era of their existence as sexist.

Mark Dapin, a former editor of Ralph, says the so-called "lads' mags" such as Loaded, FHM and Ralph were originally about humour, music and football rather than sexually explicit content. They couldn’t be too smutty because they relied on advertising, whereas more risque titles like Picture and People were always more driven by circulation, but that changed over time.

“Men's magazines do seem to become the same thing in the end – no matter where they start, they evolve or devolve into more sexually explicit publications,” Dapin says. “In the end, it's about profit, it’s about capitalism, it's about what mainstream publishers were prepared to embrace to turn a dollar.”

Lumby, who at one point wrote a humorous, feminist column for Ralph, points out that the content has shifted online and is much more extreme. “As much as we want to decry the overt sexism of some of these magazines, they look like innocent times now if you go online.”

While Lumby agrees pornography is not suitable for children, she says the reality is that regulation is unlikely to be effective. “Unless you're going to be China and you're going to ban certain search terms and memes and material and you've got an army of censors, which they literally do, then it's a fantasy,” she says.

Dapin, also a one-time casual sub-editor on Picture, is not sentimental about the closure of the titles known in the industry as “the P's”. “My feeling is those magazines barely existed for a long time [in terms of commercial viability] and their function, if you're totally honest, was to help truckies have a wank in their cab.”

a, closure, glorious, of, P, run
You may also like: