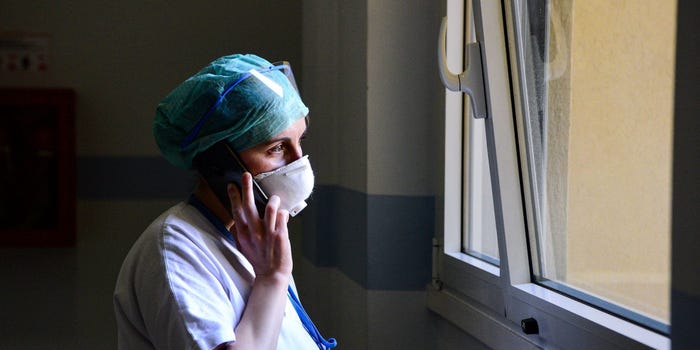 Italian officials are calling for an "immediate intervention" after a video surfaced of a man lying dead in a bathroom in a Naples emergency room.

"In Naples and in many areas of Campania the situation is in fact out of control. It's no longer a matter of opinions or opinions, it's reality here talking," Italy's Foreign Minister Luigi Di Maio said in a Facebook post.

Italy is going through a second wave of the pandemic and has reported 33,000 new cases and 623 deaths and also hit a million total coronavirus cases as of Wednesday.

The New York Times reported that officials at Cardarelli Hospital in Naples confirmed that the video of the man was shot there and said he had a "suspected COVID-19 infection," but his cause of death is still being investigated.

The video highlighted how overwhelmed hospitals in the region have been. In another hospital in Naples, suspected coronavirus patients were given oxygen in the hospital's parking lot as they waited to get treatment inside.

"Some areas in the south have a less developed health care system as compared to that of areas hit in the first phase," Giovanni Rezza, the director of the prevention department at the Health Ministry, told The Times. "Since even those areas didn't hold out, the situation could be even more dangerous in the south."

The Times reported that during Italy's first wave, the efforts to protect the southern part of the country were central to the country's initial lockdown to curb the spread of the virus.

"We need a national lockdown," Massimo Andreoni, a virologist and the scientific director of SIMIT, the Italian society of infectious and tropical diseases told The Times. "If we wait for Naples to have Milan's numbers we'll make a massacre."

The northern part of the country is also still being impacted by growing surges in cases.

Dr. Luca Cabrini, a doctor who runs the intensive care ward at Varese's Circolo hospital, in the Lombardy region told the Associated Press his hospital has 500 beds filled with coronavirus patients.

"We are very close to not keeping up. I cannot say when we will reach the limit, but that day is not far off," Cabrini said.