Follow
Home » Lifestyle » A kinder, gentler Married at First Sight? We’ll believe it when we see it

A kinder, gentler Married at First Sight? We’ll believe it when we see it

"Contrary to what people might believe I actually enjoyed the experience last year," says Elizabeth Sobinoff, who has signed up for another blind match in the seventh season of TV's most dubious "social experiment" despite seeming to having a torrid time of it – and her groom running away the day after their wedding – last year. 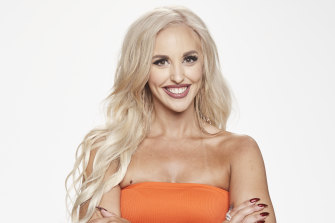 Elizabeth Sobinoff, one of the participants in last year’s Married at First Sight, is back for a second try in season seven, launching on February 3. Credit:Nine

We saw her 2019 match, Sam, make comments about her weight and strike up a romance with another bride, Ines, in a plotline that shocked viewers and participants alike.

So, why is she back? "I hope I can find someone that I can have a full-on relationship with," Sobinoff says. "I've seen it work. It worked last year [with Jules and Cam, who married for real last November]. I've seen how people can connect through the experiment and I want that."

Nine has seen it work, too. Though the number of successful pairings from the show remains low – "it's probably still on one hand," admits Tara McWilliams, the executive producer of the show at production company Endemol Shine Australia – it was the ratings rock upon which Nine’s ratings victory was built last year. 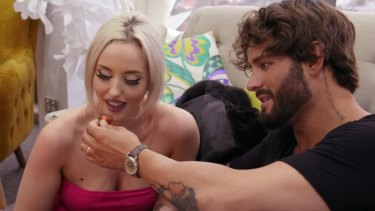 Sweet moments were in short supply for Elizabeth Sobinoff last year in her ill-fated match with Sam Ball.Credit:Nine

And that poses a problem of sorts. Under CEO Hugh Marks, Nine (the publisher of this masthead) has tried to reposition itself as a family-friendly broadcaster shorn of some of the rough-edged blokiness of years gone by.

MAFS, with its partner-swapping, foul language and explicit sex talk, sits a little uncomfortably with that, even if its viewer numbers do not.

It's a tension Nine's head of content, production and development Adrian Swift acknowledges. "On the one side of the equation we've got this amazing drama happening. 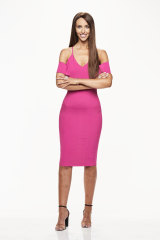 Elizabeth Sobinoff has undergone a dramatic makeover for this year’s MAFS.

On the other side, it's 'hold on a second; for this to be a massive hit we've got to get mothers, teenage daughters and old people to watch – and they will find a lot of this shocking'. That was the gymnastics we went through pretty much every day last season."

Swift insists the worst of the participants' behaviour never went to air, though he admits some of what did air sailed pretty close to the line. And, he adds, he found some of it "almost impossible" to watch.

"Do you ever want to make TV that people can't watch? No, you do not," he says. "It was one of the hardest shows to make that I've ever been involved in."

This year, he adds, "there is a certain amount of addressing last year. You can't sanitise it too much [but] I think the mood of the nation has changed a little bit with the bushfires. I think people need a little more love because of all the travails we've been through over the last few months."

The early episodes of this season do indeed seem to radiate optimism – but you can almost guarantee some of these matches will soon go up in flames too, just like in years past.

Certainly, McWilliams says she has not felt any pressure from Nine to tone down the show. "And thank God," she adds. "If we had to I think it would be very difficult and quite frustrating. By the nature of it I think it's always going to be quite unpredictable and controversial at times."

The key to the series working is in the casting – but, McWilliams insists, people are not cast with a deliberate eye to creating tension and conflict, despite what some critics and even some former participants have suggested. "I wish I could take full credit, say I'm the casting genius behind this show and all my plans came to fruition, but that is not the case."

But she does concede that the proportion of people going on "for the right reasons", as they like to say, is nowhere near as high now as it was in the early seasons.

"It's not the main driver for everyone," she says. "But even if people are coming on to increase their profile, or to get Instagram followers, or to get some sort of public profile out of this, I genuinely believe that everyone who comes on hopes they are matched with someone they like and potentially could have a relationship with.

"I think the experience is probably the main driver now," she adds. "Being on television, being part of the experiment and whatever that brings. I don't think it's so black and white as either love or fame."

Dear Coleen: Do I tell judgmental friend’s wife that he’s a cheater too?

Döstädning is the Scandi decluttering trend that demands we celebrate life

ICYMI: Royals news you need to know for February 2020

Fans Are Convinced Emma Watson Is Kitty On ‘The Masked Singer’ — Yes, Really