The royal commission into aged care has rebuked the federal government for failing to act on persistent problems across the sector, with new research sparking a clash in Parliament over measures that might have saved lives.

In a rare statement ahead of their final report, the royal commissioners said the government had ignored calls to require more public reporting of the quality of care in order to fix the system. 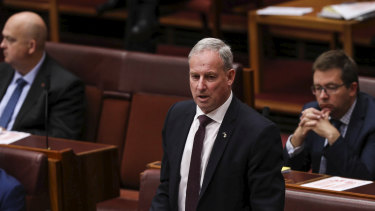 Aged Care Minister Richard Colbeck apologised in the Senate for not knowing how many residents and staff had died from outbreaks.Credit:Dominic Lorrimer

"Without it, problems are hidden from sight and not addressed," they said in a statement about performance checks.

"It is unacceptable that in 2020 the aged care system is still without this.

"Had the Australian government acted upon previous reviews of aged care, the persistent problems in aged care would have been known much earlier and the suffering of many people could have been avoided."

While the statement was about years of policy failure rather than the coronavirus, it came as Aged Care Minister Richard Colbeck apologised in the Senate for not knowing how many residents and staff had died from outbreaks.

"I offer my condolences, my sincerest condolences, and that of the government to every single one of those families that has lost a loved one," Senator Colbeck said. "I should have had the information. I didn't and I take full responsibly for that."

"For this government, you know, the buck never stops – no-one is responsible," Mr Albanese told Parliament.

Mr Morrison insisted the government had developed a plan to deal with the COVID-19 outbreaks and had repeatedly updated the plan while spending more than $1 billion on measures including salary bonuses and a surge workforce.

The political debate also turned to a new federal report on the outbreak at Newmarch House in Sydney in April, showing that 87 per cent of staff had to be isolated soon after the first infections.

The report revealed conflict over management and confusion over policy when the centre manager, Anglicare, was acting on advice that up to 30 per cent of staff would need to be isolated.

Asked on July 29 whether he had acted too slowly on the aged care outbreaks in Victoria, Mr Morrison said the "complete withdrawal" of the workforce at the St Basil's home in Melbourne had been very different to the problems in NSW.

"What had occurred over the weekend, in particular, which rapidly escalated the situation in a number of these facilities, as I said, was the complete withdrawal of the workforce," Mr Morrison said.

"This was a new situation that had not been anticipated or foreshadowed at a state level or considered at a federal level, that an entire staff of an entire facility where there had been a significant COVID outbreak would be completely removed."

Labor MP Susan Templeman asked Mr Morrison why he made that claim when the withdrawal of workers had occurred at Newmarch House as well as Dorothy Henderson Lodge earlier in the year.

Mr Morrison said the "context of the comment" was important because the problem was the speed of the events and the "immediate" removal of workers.

"That is what has occurred at the facilities … in Victoria," Mr Morrison told question time.

"This was the complete [withdrawal] in a matter of hours, when that workforce was withdrawn.

"And that is the issue that presented the most critical challenge.

"Now it is the case that prior to that event, workforce planning had been done."

Mr Morrison listed a series of measures from February and March for the aged care sector to show plans had been put in place, countering claims at the royal commission that there was no plan.

The royal commission released a report by the South Australian Health and Medical Research Institute that showed stronger reporting measures were in place in aged care in other countries.

Asked why his government had not acted on previous reports into aged care, Mr Morrison said he would wait for the final report from the royal commission.