Several retirement homes devastated by outbreaks of COVID-19 are facing the threat of legal action from angry relatives accusing them of negligence.

The federal government could also be included as a defendant in any litigation given its time in charge of St Basil's after it booted out all workers on July 21 and temporarily took over the home's management with replacement staff. 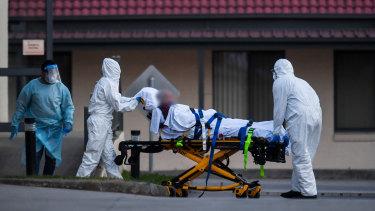 A resident is taken from St Basil’s Homes for the Aged in Fawkner to hospital last week.Credit:Justin McManus

St Basil's staff took back control of the embattled facility on Thursday but told The Age it would again withdraw its employees because of concerns about poor record keeping.

The chairman of St Basil's, Konstantin Kontis, said files were allegedly missing and that an initial examination of others indicated the care of residents wasn't properly documented during the fortnight the federal government's contracted agencies managed the centre.

Mr Kontis said he had reported missing drugs of addiction, including opiates, to the Australian Health Practitioner Regulation Agency.

"The books are incomplete and we think there are drugs missing," Mr Kontis said. "We feel the records are inadequate and do not indicate that these people received proper treatment between July 22 and when they were sent to hospital."

A spokesman for Aged Care Minister Richard Colbeck said he had ordered an investigation into St Basil's concerns.

"The minister has not received any such reports and has asked the department and the Aged Care Quality and Safety Commissioner to investigate this as a matter of urgency and to refer on to the relevant authorities," the spokesman said.

The allegations came on the same day The Age received confirmation of a legal push from devastated families against St Basil's and Epping Gardens.

The legal actions would allege that the facilities breached the duty of care they owed their residents. 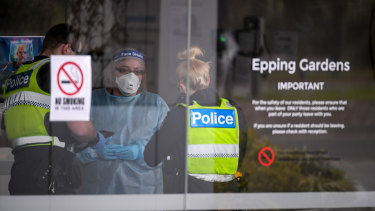 Mr Karikas said civil action against St Basil's, which is owned by the Greek Orthodox Church, was the only way of establishing what went wrong.

"We have bits and pieces of a jigsaw puzzle, but there's still a lot of pieces missing," he said.

St Basil’s was placed in the hands of replacement staff on July 22 after Victorian Chief Health Officer Brett Sutton directed the facility’s entire management and staff into quarantine to contain a COVID-19 outbreak.

Mr Kontis declined to comment on the prospect of legal action against the centre but defended the conduct of his staff. 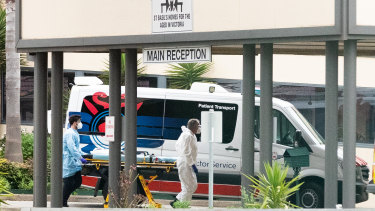 Ambulance workers push a stretcher into the St Basil’s aged care facility in Fawkner on Monday.Credit:Getty

"I deny all allegations against St Basil's. We did nothing wrong up until 9am, July 22, when we left," he said.

Tony Carbone, managing partner of Carbone Lawyers, said he was acting on behalf of several families affected by the outbreak at Epping Gardens, as the number of cases linked to the facility climbed to 169 on Thursday.

Mr Carbone told The Age he expected to issue civil proceedings in the Supreme Court as early as next week against Epping Gardens.

He said there was evidence of neglect, inadequate staffing and poor training at aged care centre even before the outbreak of the coronavirus.

"This is a human tragedy on a massive scale and many of these people should never have died," Mr Carbone said.

Mr Carbone also warned the centre's NSW-based operator it could face serious criminal charges if an infected employee were to succumb to the virus – although this has not occurred.

"With the new industrial manslaughter charges introduced in Victoria last month, the owners are looking at custodial sentences and huge fines if a worker was to die," Mr Carbone said. 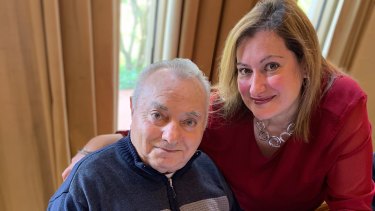 Antonio Croce, 81, died on July 23 after he contracted coronavirus while he was a resident at Epping Gardens aged care facility. Pictured with daughter Luisa Cavarra.

Luisa Cavarra is another of the relatives considering legal action with Carbone Lawyers after her father, Antonio Croce, 81, died several weeks ago from COVID-19 while living at Epping Gardens.

Ms Cavarra said that in the days before her father's death, he felt sick and was having trouble breathing. She was allowed to visit him on July 19 at the nursing home and decided to take him to hospital, where he was diagnosed with COVID-19. He died several days later on July 23.

"He was in pain, we couldn’t see him and it was heartbreaking that he died on his own,'' she said. ''We managed to do a FaceTime. The nurses at the Royal Melbourne Hospital were great. We did FaceTime and were with him till the end. But we were robbed of being with him and holding his hand."

Mr Croce, from Italy, was "always waving to people" and was loved by everyone at the facility.

"He played cards with anyone that wanted to," Ms Cavarra said. "I felt we were robbed. I know we had more time with my dad."

On Thursday it was revealed a cluster of five coronavirus-related deaths among residents of St Basil’s Homes for the Aged in Fawkner was being investigated by police and the state coroner.

Sources have told The Age a police taskforce would now be formed to assist the coronial investigation into five deaths at St Basil's.

A spokeswoman from the coroner's office said the focus of Justice John Cain's coronial investigation was yet to be determined, but under the Coroners Act 2008, he must find, if possible, the causes of the deaths and the circumstances in which they occurred.

"His Honour is also empowered under the act to make recommendations to prevent similar deaths in the future," she said.

Victoria recorded its worst day of the pandemic on Wednesday, with 725 new cases and 15 deaths in the previous 24 hours.

On Thursday, there were 471 new cases and a further eight deaths recorded in the past 24 hours. Of those new deaths, half were linked to aged care outbreaks.

Statewide, 98 residents of aged care facilities across the state have died because of COVID-19 in recent weeks.

Of the 1754 total Victorian cases linked to aged care since the pandemic began, 810 were among residents and 641 among staff, and 303 were contact cases.

There are more than 1400 active coronavirus cases linked with aged care and 103 facilities with active cases.

aged, care, face, Homes, of, threat
You may also like: