An aged care home in Prahran approved by Planning Minister Richard Wynne has angered locals over a move by the government to push through hundreds of millions of dollars in development without a transparent process.

Residents in and around Prahran’s Greville Street learned out of the blue last week that the project – twice rejected by Stonnington Council, once knocked back by the state planning tribunal, and later ruled out by the Supreme Court – had been approved by Mr Wynne. 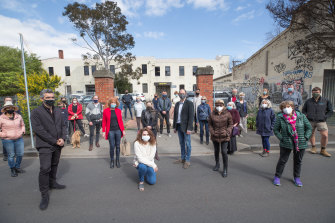 Stephen Jolson (second from left) is among those who have opposed a six-level aged care home in Prahran, approved by Planning Minister Richard Wynne. Credit:Jason South

Mr Wynne announced on Wednesday that he had approved planning permits for developments worth $933 million – including the Prahran project – in an attempt to stimulate Victoria's economy.

The proposed six-level aged care home by operator Lifeview will cater specifically to the lesbian, gay, bisexual, transgender and intersex community. It was among 10 projects that Mr Wynne has given his tick of approval to without public input.

The move has enraged Prahran residents, who have been part of a long-running fight with Lifeview over the project. Stonnington Council has opposed it twice.

Stonnington mayor Steve Stefanopoulos said what Mr Wynne had approved was “not consistent with community expectations for the site”. 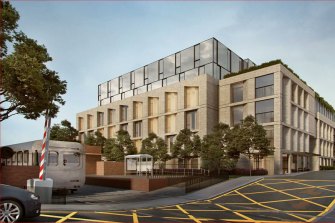 An artist’s impression of the Lifeview aged care home in Prahran, approved by Planning Minister Richard Wynne despite local opposition.Credit:LifeView

He said the proposed home’s height and size had upset locals. “It is too big and bulky with inadequate setbacks,” said Mr Stefanopoulos, who conceded that council officers had supported the most recent plan.

On Monday the council voted to ask Mr Wynne to instead let the state planning tribunal decide.

Cr Stefanopoulos said objectors should be allowed to have their say.

Among 122 objectors to the plan is Stephen Jolson, an architect who works in Greville Street, and has lived there for 12 years. He said he was appalled at the lack of transparency over the approval.

He said residents were extremely happy to have aged care in the area, especially a home aimed at the LGBTQ community, but not one that was “built very close to the site boundaries – it’s overwhelming”.

In April, Mr Jolson observed builders on the site, "boring holes in the car park and getting ready for construction to start”, he said. “We asked them what was happening and they said ‘We are getting ready to build’. So this deal was done a long time ago.”

Lifeview was contacted by phone and email about the project but did not respond.

Prahran Greens MP Sam Hibbins said there was no dispute aged care was needed in the suburb, and welcomed an LGBTQ-dedicated facility.

"But the government is using its COVID Building Recovery Taskforce to ride roughshod over the planning scheme. This approval is similar to what [former Coalition planning minister] Matthew Guy did during his time.”

The aged care home project was part of 295 developments submitted to Mr Wynne’s taskforce, established in April, and whose decisions are not public.

Asked for a list of those projects, Mr Wynne’s office declined to release them, or give details on why approved projects were chosen.

Mr Wynne said the Prahran project would deliver one of the area's first dedicated LGBTQ aged care facilities, "ensuring this community’s most vulnerable are afforded the specialised care, dignity and respect they deserve in their latter years”.

He said he had used his power to intervene in the matter "in the manner in which it was intended – for the public good and in the best interests of all Victorians”.

RMIT planning expert Michael Buxton, though, said approving projects in this way was a denial of proper process and that Mr Wynne and Labor were “cynically pushing through developments to pander to developers and building unions”.

Opposition planning spokesman Tim Smith said each of the 10 projects Mr Wynne had approved on Wednesday had their own local story.

“In every project there will be locals who objected,” he said.

“I am not suggesting that we don’t need stimulus and we don’t need to fast-track. But we’re going to have to live with these decisions for decades.”

anger, at, in, ministers, Prahran
You may also like:

Were Michael Jackson and Madonna Friends? The King of Pop Once Said the 'Vogue' Singer Was 'Not a Nice Person'