News that the performing arts escaped the round of new pandemic restrictions imposed on Tuesday was greeted with widespread relief in the industry, especially as the city’s sprawling RISING festival is 24 hours from opening.

Health minister Martin Foley – a former arts minister – pointed out that RISING, like most shows in town, is ticketed, giving the government greater confidence in allowing it to go ahead unaffected – for now. 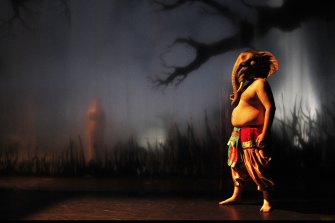 Ganesh Versus the Third Reich by Back to Back Theatre, part of RISING.Credit:Jeff Busby

“They know who’s in the venues, and I look forward to RISING being a success [and] becoming a mainstay in Victoria’s winter festival calendar,” he said.

The festival, which includes indoor and outdoor events, said it was “monitoring the situation and will provide additional updates as soon as we can”.

“We’re working closely with the Department of Health to bring you a safe and fun RISING.”

It pointed ticket holders to its COVIDSafe Event Plan and ticketing policy, which asks all patrons to keep 1.5m apart and wear a mask if that isn’t possible. If anyone feels unwell they must stay home but they get a refund and, if possible, a rescheduled ticket, as long as they contact the festival before the event.

All Melbourne’s performing arts venues have COVID-safe plans, usually with strict QR registration on entry and sometimes physical distancing in foyers. However, with capacity limits now at 85 per cent or above, there is rarely spacing between seated audience members.

Venues such as theatres effectively have two contact tracing safeguards, with patrons traceable through their tickets and from QR registration on entry.

Many venues have private plans that go beyond official restrictions: Her Majesty’s Theatre, for example, enforces mandatory mask-wearing during all performances, saying in its ticketing fine print it reserves the right to eject non-compliant patrons without a refund.

Opera singer Helena Dix, who nearly died from coronavirus she caught in the UK last year and is currently singing in Macbeth at Her Majesty’s, said the venue was “excellent” on its COVID precautions.

“I was even in my mask to and from stage,” she said.

The Arts Centre Melbourne also asks visitors to wear masks at all times – but it does not police the request, and audiences have seen only a smattering of masks. Theatre foyers are also a difficult place to impose mask-wearing, as many patrons are sipping their pre-show or interval drinks.

An Arts Centre spokeswoman said their team was working with government on the detail of its latest health advice. She said Melbourne Theatre Company’s The Lifespan of a Fact would go ahead as planned on Tuesday night, at 100% capacity with mandatory face masks for staff and audience, and all RISING events would go ahead as planned. They will contact ticket-holders in the event of any change.

However, there were some casualties. Author Sinead Stubbins said the book launch for her memoir In My Defence, I Have No Defence was cancelled due to the outbreak.

“Bad day to have a book launch I guess,” she wrote on Twitter.

Mark Rubbo, managing director of the bookshop Readings, which facilitated the launch, said the book’s publishers had decided to cancel the launch because of the outbreak.

The new restrictions wouldn’t affect the bookshop, he said, but they are reassessing other planned events, asking publishers whether they want to go ahead.

Melbourne Cinematheque, which screens old and rare films at ACMI, said all patrons would be required to wear a mask but beyond that, there were no changes to venue guidelines and it remained at 100 per cent capacity.

arts, escape, for, lockdown, Now
You may also like: