The astonishing tale of how jail saved Johnny Cash

How jail saved Johnny Cash: The astonishing tale of how The Man In Black drove into Folsom Prison a drugged-up failure and left a superstar

When Johnny Cash walked into Folsom Prison in California to record a live album in front of the inmates, his career was crumbling and his personal life was in ruins. By the end of that day, he was on his way to becoming an outlaw legend of American music, as Scott B Bomar writes

Early in the morning of January 13, 1968, Johnny Cash and his entourage, including his band, his father Ray and his future wife June Carter, stepped out of limousines in the Folsom Prison parking lot and boarded a school bus.

The huge gates of Folsom opened to allow the bus inside, and after they closed, another set opened. There was a quiet sense of foreboding among all those present. ‘The granite walls in Folsom are about eight feet thick,’ recalled Jim Marshall, the only photographer present whose pictures have been collected in a new book to commemorate the gig.

‘When the second gates clanked shut, John said, “Jim, there’s a feeling of permanence in that sound.” After that, I started wondering when we were going to get out of there.’ 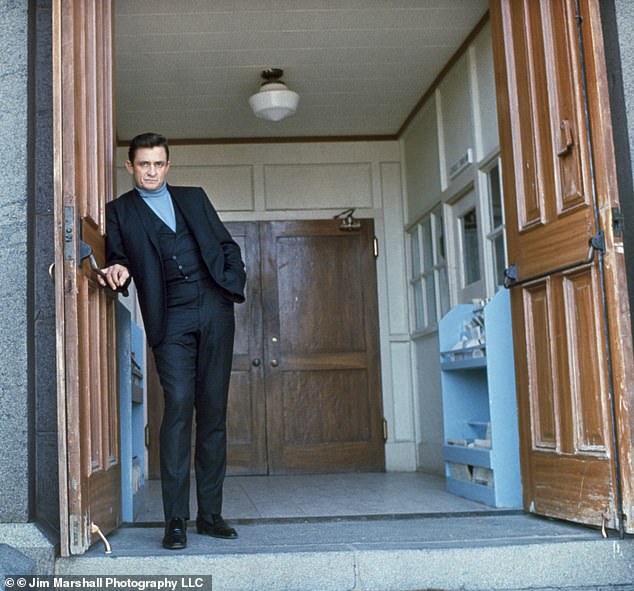 Johnny Cash (above) had played numerous prison shows for inmates in his career, but at Folsom in January 1968, he planned to record one of those concerts for the first time

Cash had played numerous prison shows for inmates in his career, but at Folsom, a maximum-security facility near Sacramento, California, he planned to record one of those concerts for the first time.

The album that resulted from Cash’s two triumphant performances that day, At Folsom Prison, would become a hit and then a classic, reinvigorating a career that had lost steam due to Cash’s ­crippling amphetamine addiction, a crumbling first marriage, financial problems and a growing reputation for missing shows.

Marshall’s photographs capture the sombre expressions on the faces of Cash and his ­companions once inside the prison walls. Those who were there described the walk to Dining Hall #2, where the shows would be performed, as something akin to a funeral march. Even Cash was nervous. 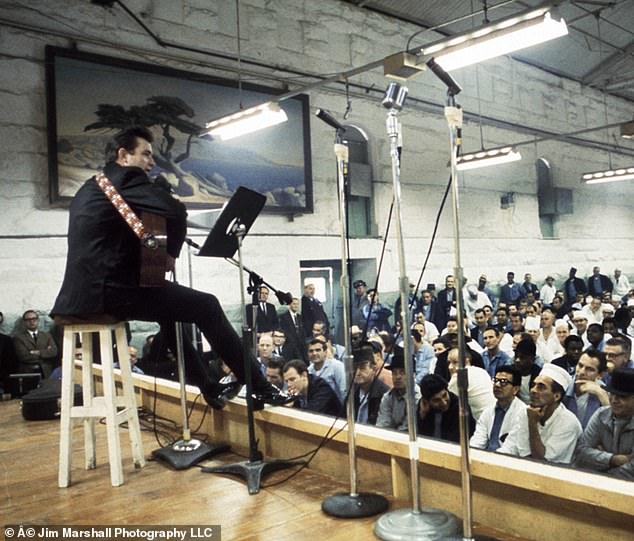 While he’d got his drug habit largely under control, Cash was not yet completely clean. He later confessed to producer Bob Johnston that he’d popped a handful of pills to calm his nerves. ‘He said, “I took more pills that morning than I ever had in my life,” ’ Johnston recounted to Cash biographer Robert Hil­burn. ‘He was scared.’

Cash had wanted to record a live album in a prison ever since he had played at the annual rodeo at the Texas State Penitentiary in 1957. On that occasion, inmates called for his song Folsom Prison Blues again and again.

Later, as his fame grew, Cash received ­letters from prisoners asking him to perform for them. He began booking shows at penitentiaries, including San Quentin in Marin County, California, where one of the inmates who saw him perform was future country music legend Merle Haggard.

‘He had the right attitude,’ Haggard remembered years later. ‘He chewed gum, looked arrogant and flipped the bird to the guards. He did every­thing the prisoners wanted to do. When he walked away, everyone in that place had become a Johnny Cash fan.’

‘Hello, I’m Johnny Cash,’ was Cash’s greeting to the inmates when he took the stage at Folsom that January morning. Hilburn was struck by what he witnessed: ‘The atmosphere was electric as Cash prowled the stage between verses with the pent-up tension of a caged panther.’ 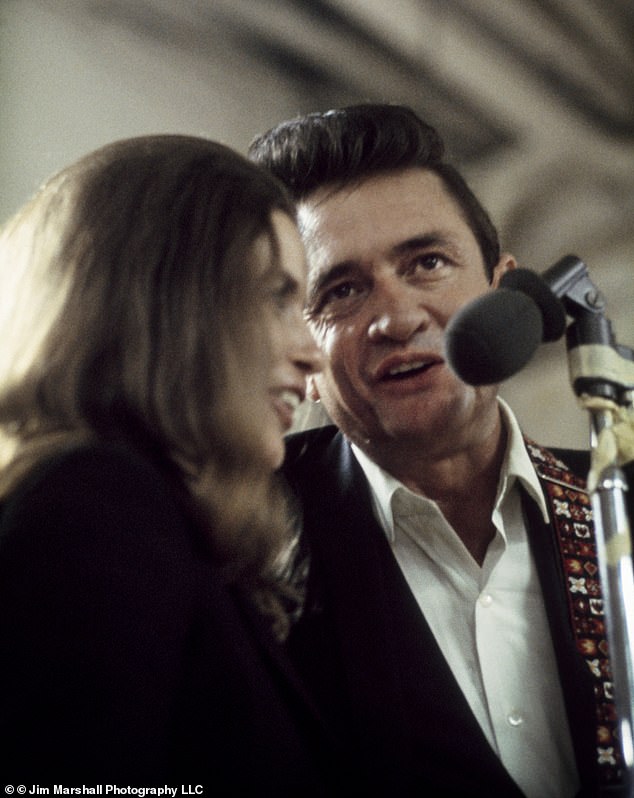 After the Folsom concert, Cash married June Carter (above with Cash), found God and kicked his drug habit, and he decided to record another prison album, At San Quentin

After the Folsom concert, Cash married June, found God and kicked his drug habit, and he decided to record another prison album. At San Quentin would be even more commercially successful than its predecessor.

At that show, Cash played A Boy Named Sue for the first time. It would become the biggest-selling single of Johnny Cash’s career.

The extraordinary popularity of the Folsom and San Quentin albums forever linked Cash and prison in the popular imagination, leading many to believe he had once been an inmate himself.

But while he’d spent a few nights in jail, Cash never served hard time – though he didn’t mind encouraging the impression that he had. ‘I speak partially from experience,’ Cash wrote in the liner notes for At Folsom Prison. ‘I have been behind bars a few times. Sometimes of my own volition – sometimes involuntarily. Each time, I felt the same feeling of kinship with my fellow prisoners.’