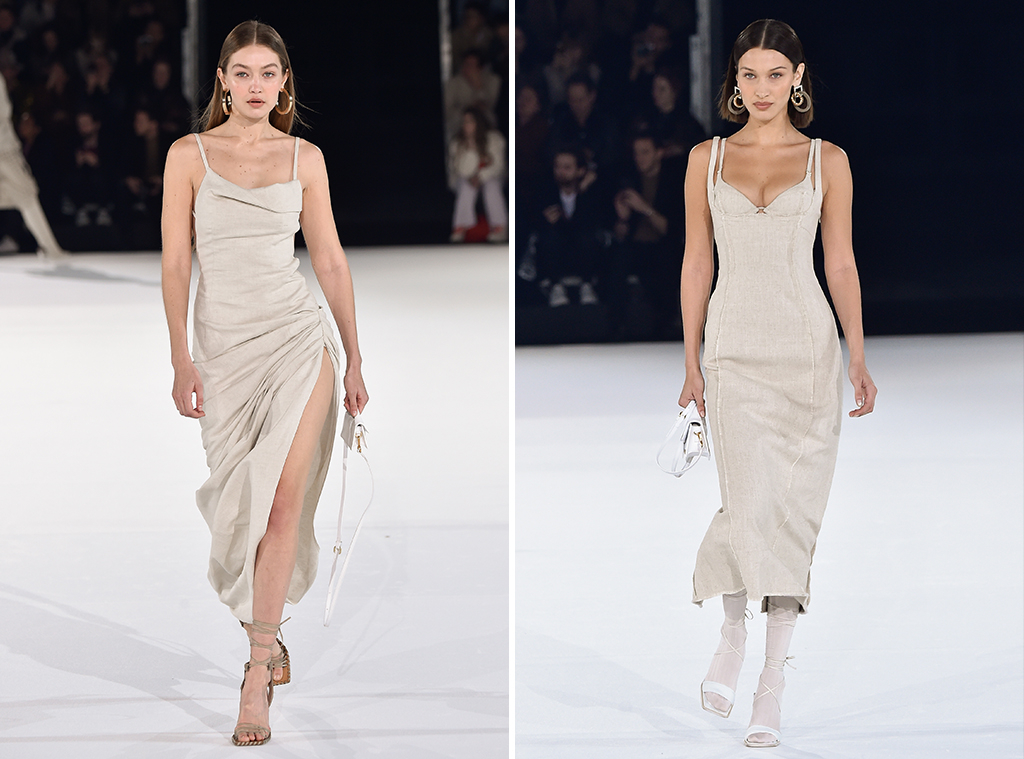 Sisters who strut the catwalk together, slay together.

We might be in the midst of peak award show season but this weekend things are kicking off all over the world in New York, Milan and Paris for Fashion Week 2020. And what better duo to leave us speechless than top model sisters Gigi Hadid and Bella Hadid?

On Saturday, Jan. 18, the two made their way down the catwalk for the Jacquemus Menswear Fall/Winter 2020-2021 show in Paris, France. Better yet, the two were twinning in oatmeal-colored dresses.

On one hand, Gigi rocked a Jacquemus strappy dress with bold gold hoop earrings and made her way down the runway clutching onto a tiny white purse. As for her makeup, the 24-year-old actress was rocking neutral and subtle bronzey look.

Her sister, Bella, stepped out on the runway in an edgier dress as she glamorously pulled off stockings with heels. Her dress also featured a stone-colored corset. As for Bella, she wore her hair in a straight short bob and wore chunkier geometrical earrings.

We can’t wait to see more of these two on the runway!

On Friday, Jan. 17, Hadid turned heads for all the right reasons again when she appeared in Berluti Menswear’s show at Opera Garnier where she donned a bold and beautiful power suit. In addition to a pair of blue trousers and matching double-breasted blazer, the 23-year-old sported a bright pink blouse. But Friday’s lewk was just one of many that we can expect from Hadid (check out more looks here!).

As for her sister, this year’s fashion week comes at the heels following a whirlwind start to the new year.

As fans may recall, Hadid and her former beau Zayn Malik are back together. The two, who officially called it quits in 2018, reconciled in December to celebrate his 27th birthday.

“Gigi and Zayn got back together right before the holidays in December,” a source told E! News. “Zayn has been reaching out to Gigi for the last month and she is giving him another chance.”

Hadid was also recently dismissed as a juror in the upcoming Harvey Weinstein trial.

For the latest celeb sightings at this year’s Fashion Week, go here!

Balinese dance an epic delight for eyes, ears and soul

Camila Mendes Uses This Exact Multi-Stick for the Loveliest Glow