Norwegian Cruise Line Holdings CEO Frank Del Rio discusses the largest ship in his company’s fleet now in port in New York City and the range of amenities and luxuries on board.

Royal Caribbean is the best cruise line worldwide for your money, according to the latest US News rankings, moving up one spot from last year.

Stocks in this Article

The Miami-based cruise line is also the world's largest by revenue share, according to Cruise Market Watch. Its Oasis-class ships are the world’s four largest passenger ships and each handle more than 6,500 passengers at a time, which allow Royal Caribbean to keep costs down. Two more, even larger, cruise ships are in the production pipeline, with maiden voyages planned for 2021 and 2023.

MILLIONS OF AMERICANS ARE SKIPPING THEIR WINTER VACATION. HERE'S WHY

Celebrity Cruises slides to second place in the 2020 rankings. The subsidiary of Royal Caribbean “offers the floating-city experience of larger ships” like those of its parent while “maintaining the service standard and intimacy of smaller lines," according to US News.

Rates for Celebrity cruises to Caribbean destinations start as low as $130 per person, per night, according to the report. 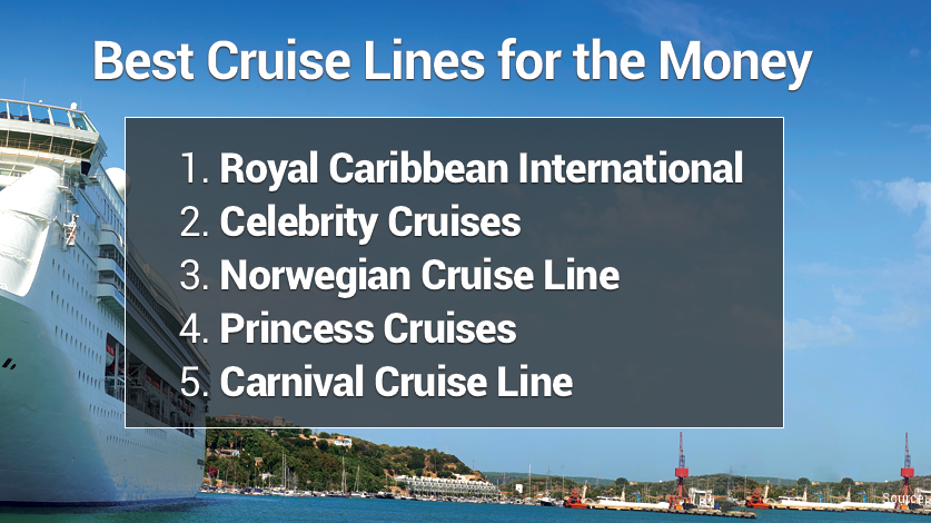 Norwegian Cruise Line reprises its third-place ranking for 2020. Norwegian, “known for its fun, laid-back ambiance and inventive ‘freestyle cruising’ concept,” according to the report, provides a distinctly different brand of cruising. The company bucks industry trends like enforced dress codes and fixed dining times to cater to a different variety of vacationers.

MILLIONS OF AMERICANS ARE SKIPPING THEIR WINTER VACATION. HERE'S WHY

Cruising continues to prove itself a popular and expanding vacation industry, with the Cruise Lines International Association estimating that 30 million passengers will travel on cruise ships in 2019.

More than 26 million passengers — nearly half of which are Americans — set sail in 2017, according to the cruise lines association, which used the most recent available data. Those trips produced $134 billion in economic output.  And those numbers are expected to increase when data becomes available for 2018 and 2019. More than 80 percent of cruise line association-certified travel agents are expecting increased year-over-year sales for 2019, according to the association.

US News scores cruise lines by an aggregation of expert opinion, traveler satisfaction reviews, and a health rating based on reports from the Vessel Sanitation Program, administered by the Centers for Disease Control.

The full list of best-value cruise lines can be found below:

best, cruise, Line, Rankings:, rep
You may also like: