BOOTS shoppers are furious after the pharmacy revealed it's cutting the value of its popular Over 60s and Parenting Club rewards schemes by 20 per cent.

Currently, members of the free-to-join loyalty schemes earn ten points for every £1 they spend on certain Boots products. 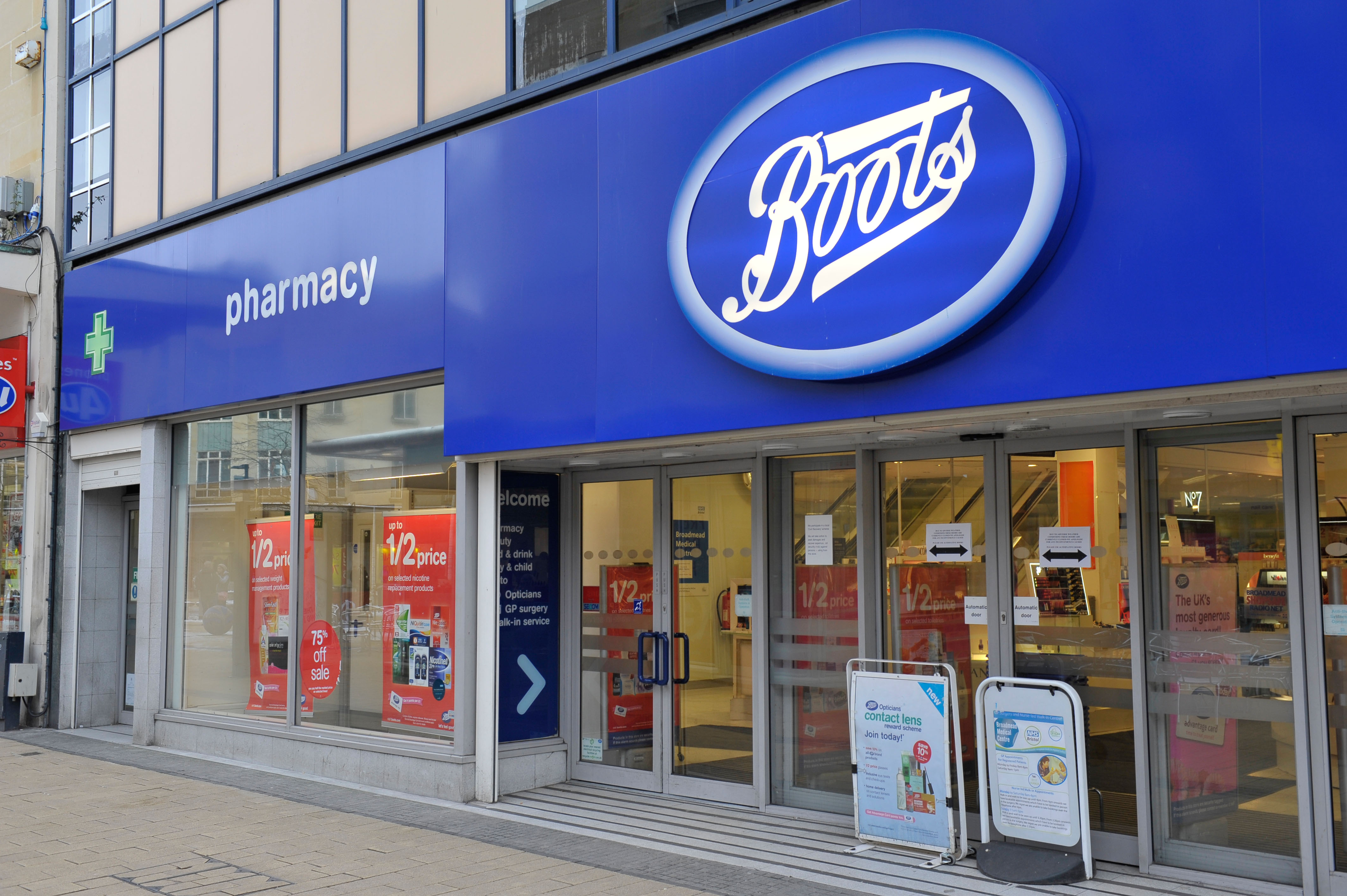 One point is then worth 1p to spend at Boots.

But from March 16, this will be slashed by 20 per cent to eight points for every £1 spent.

Boots began emailing members about the shake-up yesterday, and shoppers aren't happy about it.

What are Boots' Over 60s and Parenting Club schemes?

THESE are two free schemes available to join if you're already a member of Boots' free Advantage loyalty scheme.

This covers brands including Natural Collection, No7, Soltan, and Tea Tree Witch Hazel.

Other perks for members of the Over 60s club includes 200 points when members have their first free hearing health check at Boots Hearingcare.

On the Parenting Club, you earn ten points per £1 spent on baby products at Boots.

You also get parenting advice, special offers and free gifts at key stages of your baby's development.

Someone else added: "@BootsUK announce a 20 per cent reduction in rewards for their over 60’s customers. Other chemists & pharmacies are available…"

While another commented: "@BootsUK so even Boots is taking from pensioners now! Boots Over 60's Rewards are going down from ten in every £1, to eight!

"But still lots of pics of smiling oldies in the ad." 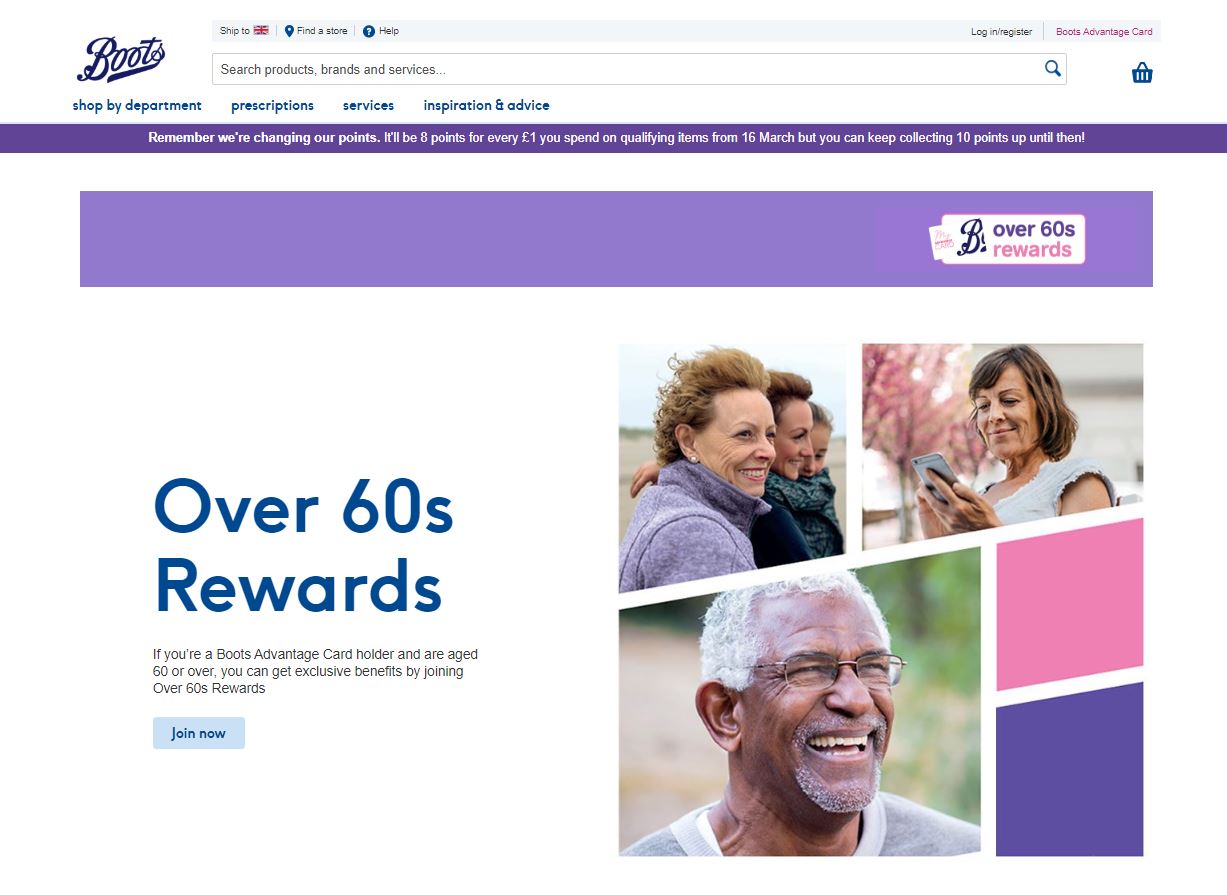 When it comes to the Parenting Club, one unhappy customer tweeted: "@BootsUK interesting to see you’re changing your parenting club points by making the offering WORSE for customers.

"Why take things away from customers? That’s not going to help business is it?!" 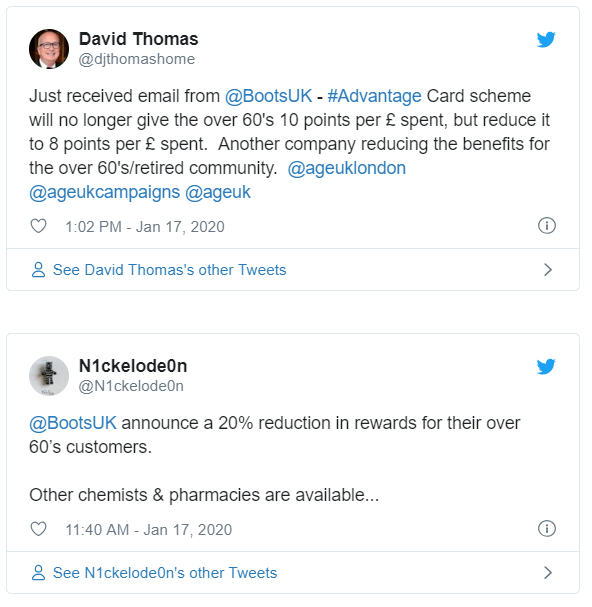 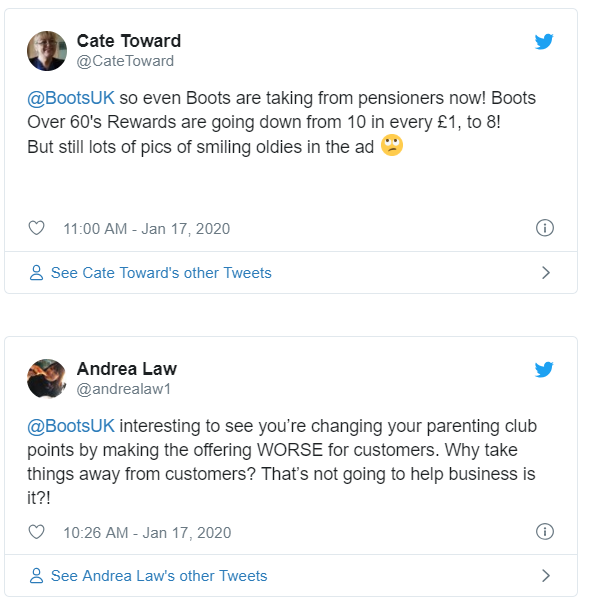 Meanwhile, on the Latest Deals, Extreme Couponing and Bargains Facebook group one person posted about the 20 per cut with another replying: "Yeah disappointing, even more so that lately there's no parenting offers on my app and I spend loads in there on baby items."

Someone else said: "Makes me wonder if they’re having big problems? What else will they cut back on next?"

While another said: "They've done the same with over 60s club points. Obvs tightening their belts at customers' disadvantage. No pun intended." 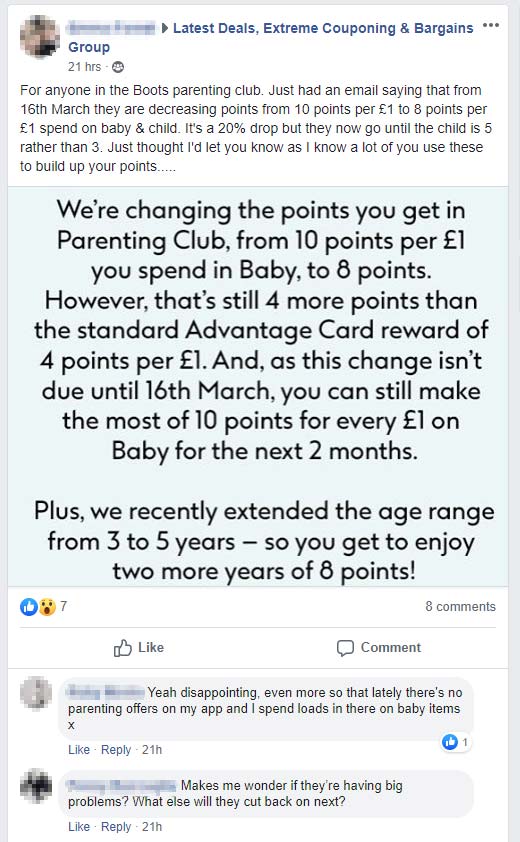 You need to have an Advantage card to join both clubs but the points these holders earn isn't affected.

Advantage card users will continue to be able to earn four points for every £1 spent at Boots.

Boots says no other aspects of either club are changing, and it adds that new joiners can continue to sign-up under the old scheme until March 16 when the points will change for everyone. 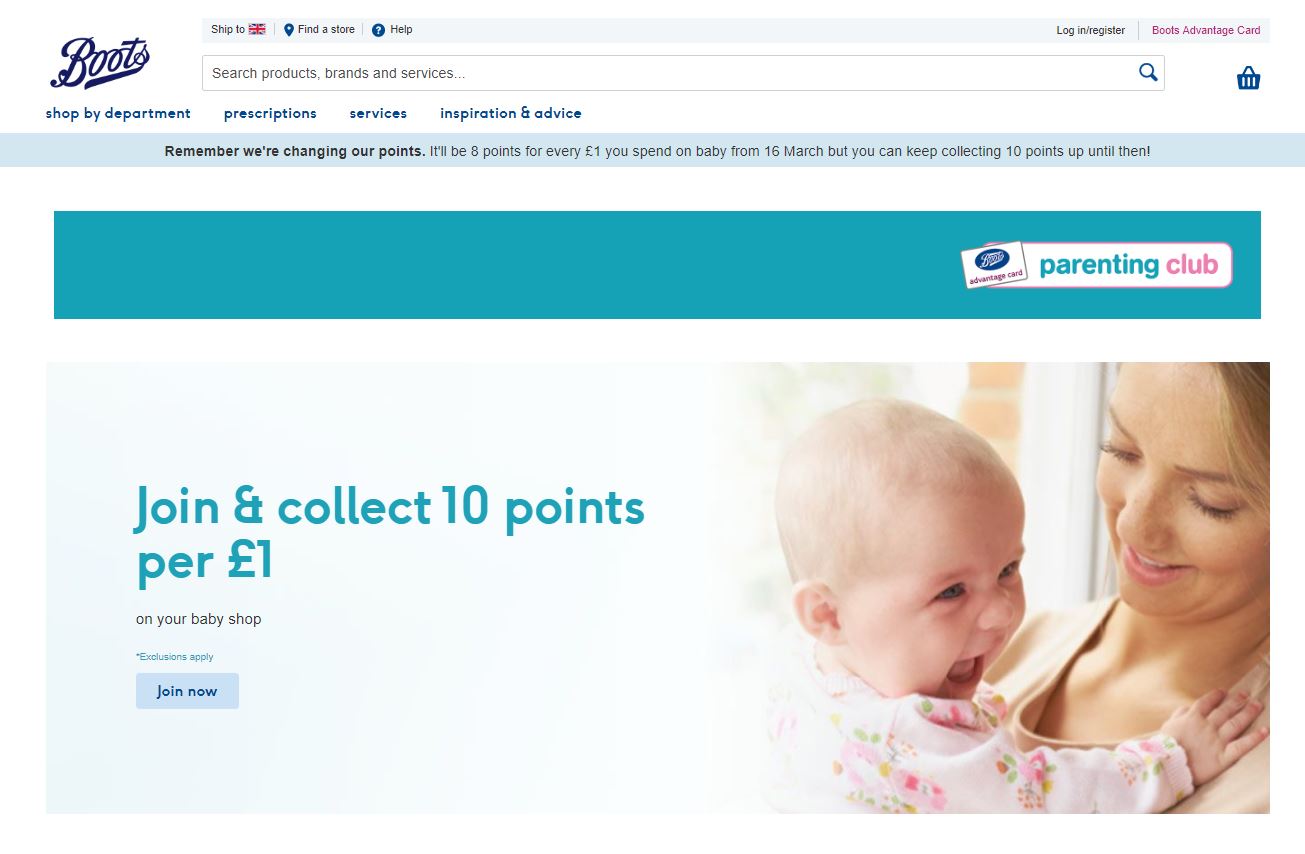 A Boots spokesperson said: "We can confirm that we are making some changes to our Boots Advantage Card Parenting Club and Over 60s Rewards loyalty programmes from March 16 2020.

“We are making these changes so we can further invest in what we offer our members. We want to continue to give them great value on the products we know they will love.”

The move by Boots follows a shake-up to its 3for2 gift offer this Christmas that also saw some shoppers lose out.

Boots has also been slammed for being 15 per cent more expensive than Asda for toiletries including medicines, moisturisers and hair removal.

In fact, Asda also beats Boots when it comes to selling the cheapest cold and flu tablets.