Striding ahead! Bride-to-be, 21, loses 60LBS in six months without going to the gym once – simply by WALKING off the weight on daily six-mile strolls

A bride-to-be has revealed how she lost an incredible 60lbs and toned up in six months without hitting the gym once – because she walked everywhere.

Kaylene Vymola, 21, from Niantic, Connecticut, wanted to get in shape in time for a dream vacation to Mexico, so she would ‘feel confident in a bikini on the beach’.

Though the instructional technology rep cut out unhealthy food she says she didn’t hit the gym once – and instead opted to start walking everywhere.

Going, going, gone! Kaylene Vymola, 21, from Connecticut, managed to lose 60lbs from her 175lb frame in just six months without going to a gym once 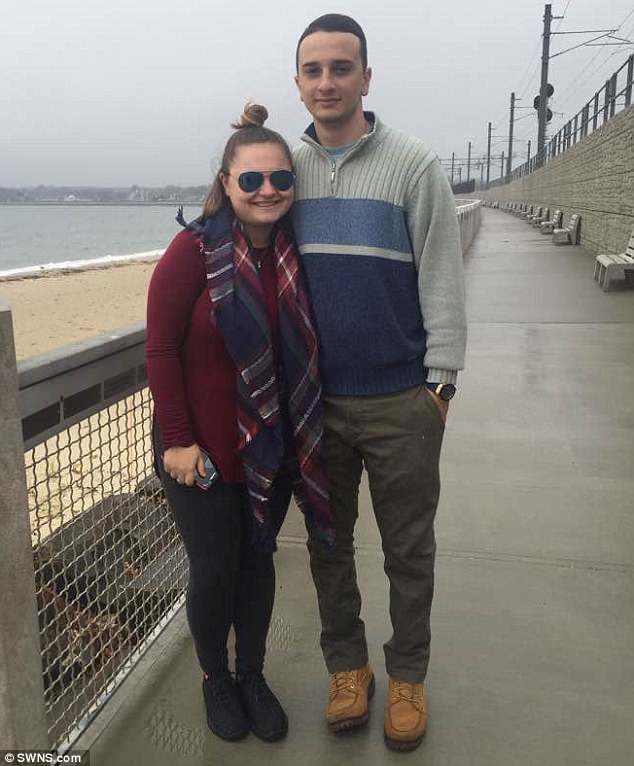 Strut your stuff! The bride-to-be, pictured with her fiance Alex before her weight loss, didn’t want to pay for a gym membership so she began walking six miles every day

Kaylene, who weighed 175lbs at the start of her weight loss journey, would trek on her lunch breaks and go for hour-long strolls around her neighborhood each night.

By the time she and boyfriend Alex Lo Monaco flew to Playa Del Carmen six months later she had dropped an impressive 40lbs, getting her weight to just under 135lbs.

She then lost another 20lbs when she returned, reaching her current weight of 115lbs.

Kalyene says she felt good in her bikini and to top it all off, romantic Alex, a customer service rep, got down on one knee while they were away and asked her to marry him.

Now the beautiful bride-to-be said she feels happier and more confident and has revealed her simple secret to success.

‘I would walk about 15,000 steps a day – six miles. I would always walk during my lunch breaks. It was either sitting at my desk or sitting in a cafe, or going outside and going for walk.

‘Every day after work I would go for an hour long walk through my neighborhood.

‘Honestly I didn’t feel that I needed to go to the gym. I didn’t want to spend the money on it.

‘I feel a lot better now. I feel much more confident, not only in my looks but in my personality. I feel like I can talk to more people. Looking ahead: Kaylene first began her weight loss journey in order to get in top shape for her dream vacation to Mexico, which she took with Alex Happy as can be! By the time she jetted off on the romantic getaway, Kaylene had lost more than 40lbs and was happy to show off her 135lb frame in a bikini on the beach (pictured) 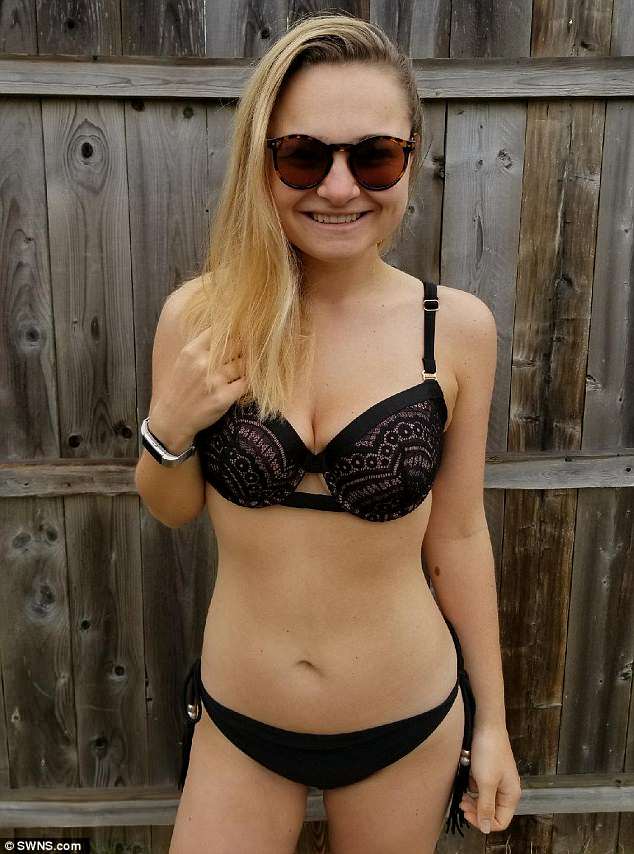 On the move: Since her return from Mexico – where Alex proposed – she has continued to shed pounds, and has now lost a total of 60lbs, reaching a weight of 115lbs (pictured)

‘I definitely have more energy as well. I could go all night walking around my neighborhood now.’

Kaylene decided to make a change in July 2017 in time for her vacation that December, firstly by cutting out some of the junk she was eating.

She stuck to her favorite breakfast of eggs but switched chips and sandwiches from Subway for grilled chicken and salads at lunch.

For dinner, she ditched carb-heavy pizza and pasta in favor of protein-based meals and she completely cut out her guilty pleasure – chocolate.

Instead of munching on Kit Kats and Reese’s she opted for healthy snacks and she swapped coffee for tea, always ensuring she was in a calorie deficit for the day.

Kaylene also took up her walking regime and by the she stepped on the plane to Mexico she had lost 40lbs. She went on to lose a further 20lbs after returning home.

‘I have always kind of been on the overweight side and I was self conscious,’ she said.

‘Through my teens, being in school and comparing yourself to other skinny little girls who get all the attention from the guys – it was very frustrating.

‘I wasn’t extremely down about it but it always kind of bothered me.

‘I felt unhappy. In summer you want to wear bikinis and dresses and I was very hesitant because I didn’t feel great in them. 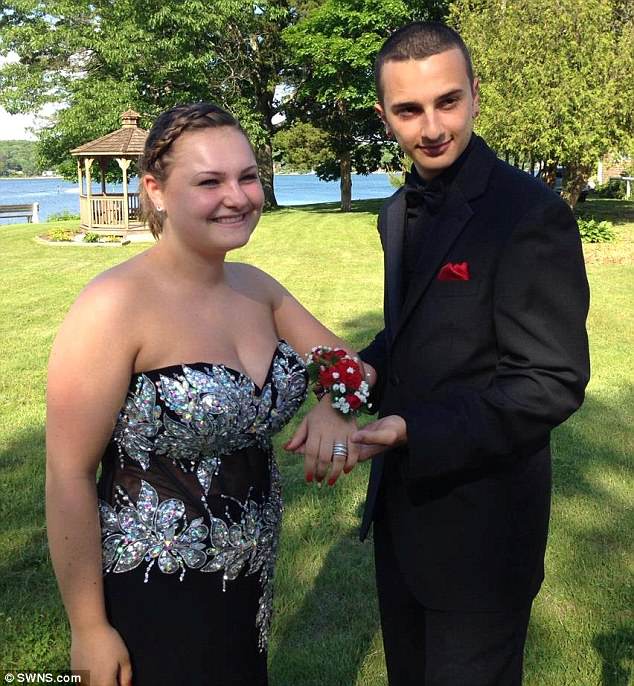 To the future: ‘Through my teens, being in school and comparing yourself to other skinny little girls who get all the attention from the guys,’ Kaylene, pictured at prom, said 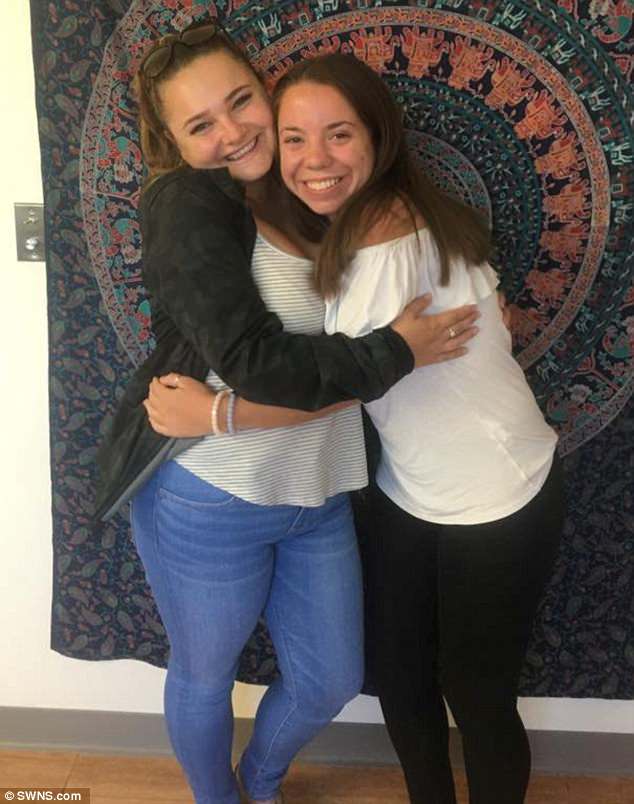 Worry: The bride-to-be admitted that she would avoid going to her town’s four beaches with her friends because she was afraid of how she looked in a bathing suit 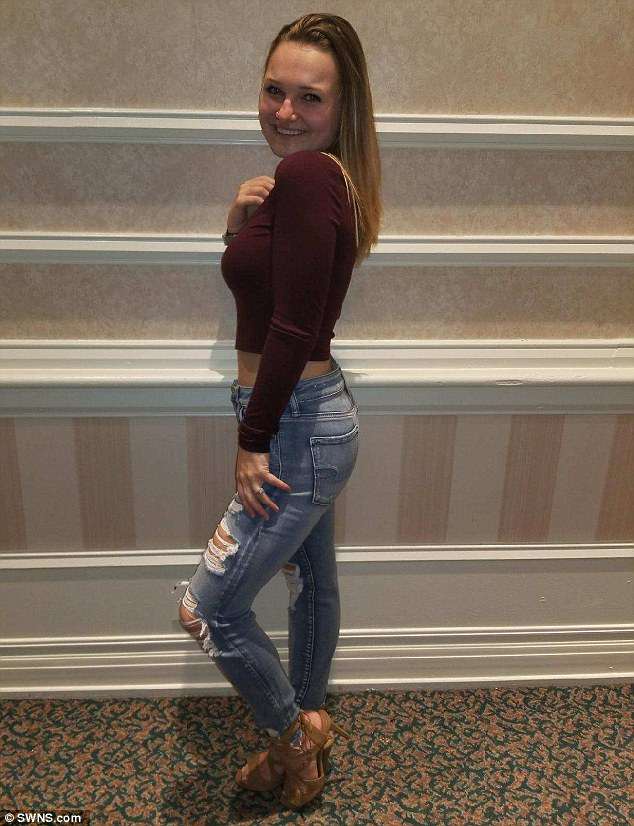 Exciting: Kaylene is now looking forward to planning her December 2020 wedding, and says she is thrilled about the prospect of trying on dresses and seeing how they fit her new body

‘We have four beaches in the town I live in and my friends would always go, but I would avoid it.

‘I wasn’t worried about comments, it was more that I didn’t want to be around a bunch of really good looking people and I felt I didn’t look good.

‘My goal was to feel confident in a bikini. I just wanted to feel better and more confident and not worry about people staring.

‘It was torture in the beginning but Mexico was keeping me going because I had it booked.’

Now Kaylene and Alex are looking forward to their lives together, and plan to wed in December 2020.

‘Alex was always very supportive throughout the entire weight loss journey,’ she added.

‘Whenever I would ask him to accompany me on a walk he was happy to do so and was always supportive of my healthy eating even though he’s a sucker for carbs as I was.

‘He continually complimented me about how great I looked, but always reminded me that no matter what weight I was at, that I would always be beautiful in his eyes.

‘We feel we have a very bright future together and I am very excited to pick out a dress.

‘I can’t wait to see how they fit on my body now that I have lost all of the weight.’

60lbs, bride, loses, months, six, walking
You may also like: