Calamity has shot back into town like a blast of fresh air across the dusty Dakota plains. 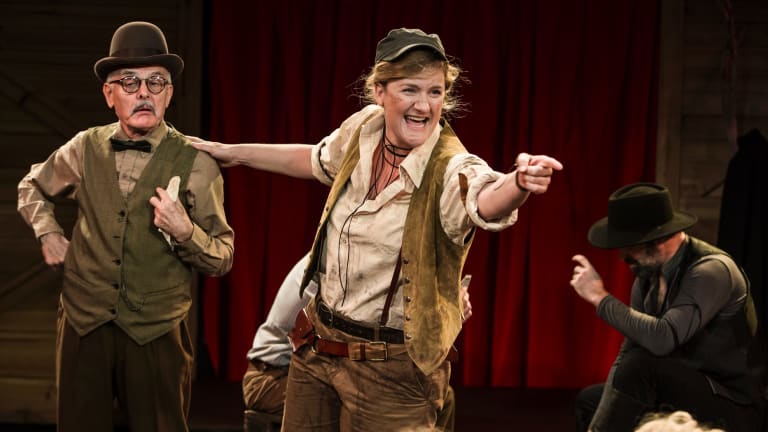 This show has been riding high since it premiered at the Hayes Theatre last year. Since then it has toured widely and is now as well broken in as a kids' pony.

Full of verve and exuberant energy, the production has retained its fine original cast, headed by the splendid Virginia Gay.

The musical is an adaptation of the 1953 film starring Doris Day, itself loosely based on the real-life frontierswoman "Calamity" Jane Cannary.

It is set mostly within the Golden Garter saloon, where the patrons have discovered the star-turn they've come to swoon over is not all she appears. She is – shock, horror – a he.

To save the saloon owner's skin, Calamity heads to Chicago to bring a real showgirl superstar to Deadwood, Dakota. But Calamity ropes in the wrong gal and returns with the showgirl's maid, Katie Brown (Laura Bunting). Aw, shucks, it's an easy mistake to make.

Katie's Deadwood debut doesn't go to plan but she wins the heart of everyone in town. Not least Calamity's.

The story is slight and takes a while to get going. But with a heroine more at home in buckskin than baubles and songs such A Woman's Touch and My Secret Love, it's easy to see why the show's subtext has long had queer appeal.

Director Richard Carroll has teased out the musical's feminist and queer themes in this witty production, replete with topical and meta-theatrical references.

Created when homosexuality was outlawed, the musical has a conventional resolution. It is one we might choke over today. But never mind the surface, feel the subtext.

Gay is outstanding as Calamity. She can holler and drink and ad-lib with the best of them. She's funny, she's tough, she's tender, with a voice as rich and strong as fine bourbon.

Anthony Gooley injects a dose of camp into Calamity's sparring partner, the macho "Wild" Bill Hickok.Sheridan Harbridge is a dynamo as bar girl Susan and Adelaide Adams and Rob Johnson a comic treat as the hapless Francis Fryer.

The arrangement of Black Hills of Dakota, delivered full of yearning by the ensemble, is a musical knockout.

This is a joyful production. If you missed it last time, don't make the same mistake. Or Calamity will have your guts for (golden) garters.

Calamity, Jane, of, Queen, review:
You may also like:

Prince William and Queen Elizabeth: Their Relationship in Photos

These Costco & Target Stores Will Start Selling Only Essential Items

The reason everyone is confused by Meghan Markle’s real name