Catholic schools break ranks with advice and call for closures

Sydney Catholic Schools have defied government advice and the stance of most public and private schools by calling for school buildings to be shut "as a matter of urgency" and lessons to be held online.

A few private schools are also breaking ranks with the majority of independent principals by moving all their lessons online. Pymble Ladies College will send its girls home from Thursday, although will still offer supervision on campus. 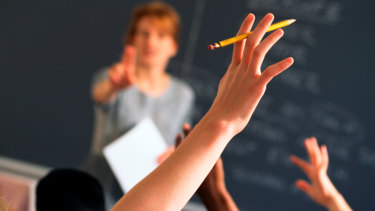 Catholic schools may soon stop teaching in classrooms and move to online learning as the coronavirus crisis escalates.

State and federal health authorities are warning that closing schools prematurely might do more harm than good, as it will force 15 per cent of the workforce home to look after children, may spread the virus, and could lead to a shutdown of six months.

So far in NSW, schools have presented a united front about adhering to government advice. But Sydney Catholic Schools, one of the major dioceses operating under Catholic Schools NSW, on Tuesday became the first school system in the country to publicly question that stance.

While about 20 non-government schools in Victoria are closing, most private school principals in Sydney are backing health advice to keep their campuses open despite intense pressure from parents to shut them amid deep public concern about COVID-19.

Many parents are keeping their students home regardless of advice; some schools estimate one in four students, and sometimes more, are absent. Across public schools on Monday, it is understood that attendance was down 17 per cent.

Some 20 NSW private school principals had a phone hook-up with state health chiefs on Sunday night, and, following that advice, most are staying open but some are offering an online alternative for anxious parents.

The heads were told there was no evidence to suggest proactive school closure would limit social contact, especially in high school students, and there was evidence that closures could create more problems as the children interact with the broader population.

Senior government officials worry that if private schools close, there would be pressure for public schools to do the same, even though private schools are far better placed to run online classes.

A senior NSW education official said there had been a "painstaking effort to work closely together and to come up with a shared response as is being modelled by the Prime Minister and the Premier."

Sydney Catholic Schools on Tuesday called for buildings to close "as a matter of urgency", with the director, Tony Farley, saying his schools were planning to deliver education remotely.

The head of the Catholic Education Diocese of Parramatta, Greg Whitby, agreed. "The issue is now not if, the only issue is when," he said. Both stopped short of closing their own network of schools. Mr Whitby said he would work with other sectors to have a common position.

In a letter to parents, head of independent school Wenona, Briony Scott, said health officials remained "adamant that this is a long game (six months or more), and the longer we can hold out, and keep our students in school, even if just till term 2, the better," she wrote.

"Many of our families, particularly those with medical backgrounds, have expressed concern about this approach and a significant number vehemently disagree." As a result of their concerns, the school will move to a blended learning model, that will allow distance education for those who choose it but physical lessons for the rest.

PLC went a step further, saying the college council had decided to move to a fully online learning environment on Thursday. Campus would remain open to look after students whose parents needed to work. Alpha Omega College in Auburn and Pal Buddhist School are also putting all classes online.

But others such as St Andrew's Cathedral, MLC and Waverley College will remain open, while testing their online systems. Public schools have also begun sending letters to parents, ascertaining the resources they have at home and setting up accounts on systems such as Google Classrooms.

NSW Health said on Tuesday saying advice on school closures from previous epidemics shows costs are often underestimated and the benefits are overestimated, and this is likely more the case with COVID-19, which is mild in children.

"For pre-emptive school closures to be effective, prolonged closure is required and it would be unclear when they could be re-opened. If there were still a large pool of susceptible students when schools are re-opened, there would be likely to be re-emergence of transmission in the community."

"And that's for two primary reasons. One is a workforce one. We want to make sure we have got the workforce we need to deal with the virus," Mr Tehan told Sky News.

"And the second is a health one. And that, importantly, is if children are at home then it's often the case that we have to get elderly people in to look after them – whether it be uncles or aunts, grandparents etc – and then that poses a risk to them."

break, catholic, ranks, Schools, W
You may also like:

Morgan Wallen Says He Won’t Play Shows This Summer, Is Still Working on Himself Following Scandal

RUTH SUNDERLAND: How I pity Remainers who have been proved so wrong