The UK’s leading cervical cancer charities have become involved in social media storm over the use of the word ‘women’ in their messaging.

Jo’s Trust has received a backlash after taking to Twitter to respond to a trending hashtag #OnlyFemalesGetCervicalCancer, saying that ‘everyone with a cervix’ should have access to information and support.

The post provoked a divided response from women, with one commenting that the use of the term ‘people with a cervix’ is ‘dehumanising and disappointing’.

Meanwhile, The Eve Appeal also shared a lenghty post from a cervical cancer survivor named Karen, who accused people of ‘weaponising cancer’, by arguing over not using the word ‘women’.

‘It’s not excluding females from the narrative, it’s including anyone at risk of this largely preventable disease,’ she wrote.

However a spokesperson for The Eve Appeal told PinkNews that the post was removed within one day, due to nasty online comments after one part of the lengthy post was taken ‘out of context’.

Jo’s Trust has prompted a divided response after saying that ‘everyone with a cervix’ should have access to support. Some critics claimed it was excluding vulnerable women who might not know they have a cervix, while others said it is right to make transgender men feel included

In a lengthy Instagram statement, the surivor wrote: ‘A few days ago there was a hashtag trending on Twitter that I can only now bring myself to type out in full.

‘How we have reached a point where transphobic people are arguing over and trying to take ownership of who “gets” cervical cancer?

‘It’s vile. It’s also really triggering for people who’ve actually had the disease. I’m including myself in ‘people’. It’s upsetting, and I’ve had a cry over it, because how people can get possessive over cancer is beyond me.’

She added that while she’s had part of her vagina removed, she does not feel as though she is ‘less of a woman’ and told that deterring others from a life-saving service could have ‘negative and potentially fatal consequences’. 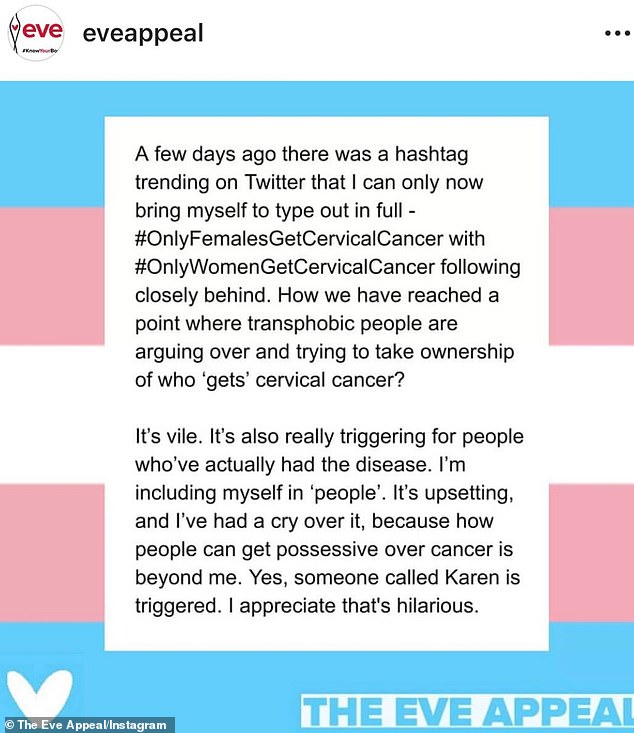 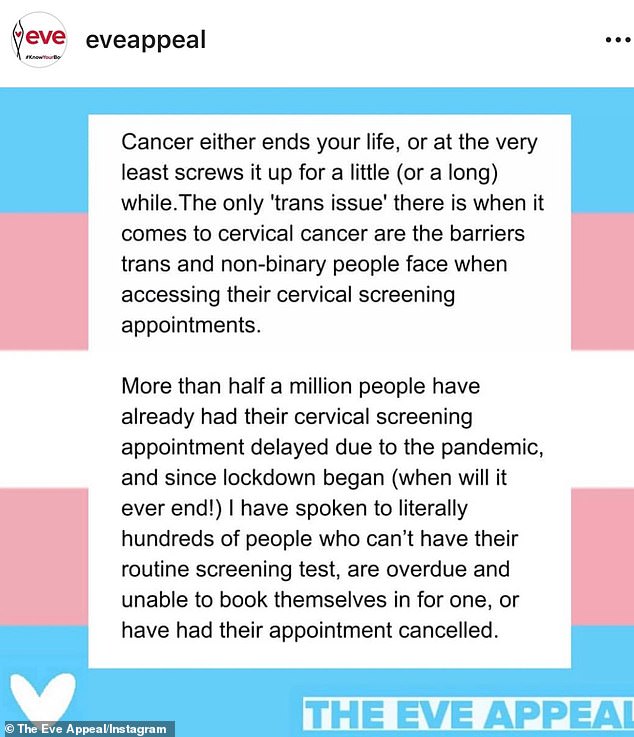 he accused the users of ‘weaponising cancer’, telling how the disease 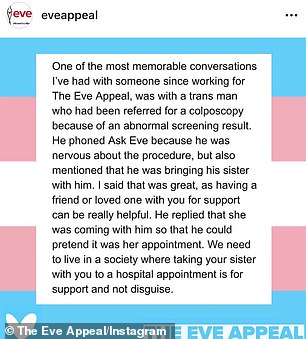 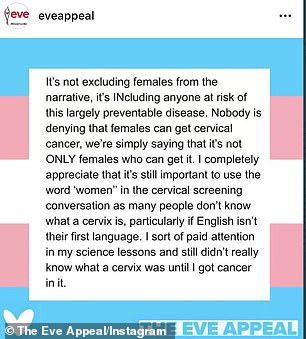 She penned: ‘I’m really lucky that I still feel like a woman despite having parts that ‘make me a woman’ removed.

‘I do not feel like less of a woman because I have less of a vagina. Because having a vagina isn’t what defines me as a woman.

‘Stop weaponising cancer. It’s as simple as that. Gate keeping a life-saving NHS screening service will have nothing but negative and potentially fatal consequences.’

However according to PinkNews, a screenshot of the post was posted by a Twitter user who took issue with the charity’s trans-inclusive stance, causing a wave of transphobic abuse and forcing the charity to remove the post. 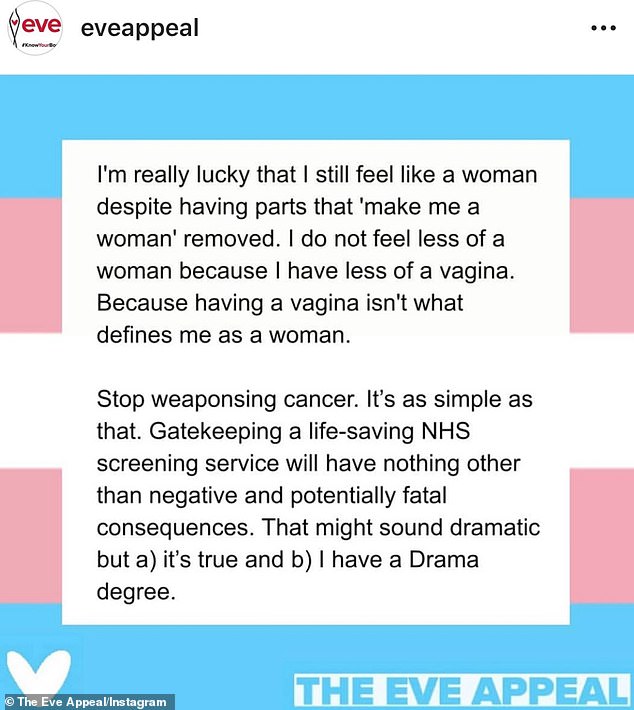 She wrote that after having ‘part of her vagina’ removed, she ‘doesn’t feel like less of a woman’ and insisted her vagina isn’t what defines’ her femininity

The charity said: ‘It was really upsetting to see our Instagram post, which was written from the personal perspective of someone who’s had cervical cancer, get taken out of context.’

They added of the hashtag: ‘The problem with the hashtag ‘Only Females Get Cervical Cancer’ is the word ‘only’.

‘I get the inclusive language. The issue is that many females will not know that they have a cervix,’ one critic wrote.

‘Vulnerable females from underprivileged or religious backgrounds, or struggling in English will not think that they need to worry about cervical cancer. Your PC approach kills.’

Another echoed the same sentiment, adding: ‘For those that don’t know if they have a cervix or not (let alone what one is eg. those whose first language may not be English), who are the group of people that would need access to this vital information? Or don’t these people count?’

charity, delete, forced, Insta, to
You may also like:

15 Beautiful Fall Sweaters That Will Bring Out Your Eye Color

The Queen has pulled out of Cop26, why not everyone else, too?