Legendary American diplomat James Baker remarked 30 years ago that "sometimes an active policy is best advanced by doing nothing until the right time – or never."

Australian Treasurer Josh Frydenberg may have been wise to take this advice on board before delivering a speech on Wednesday offering renewed engagement with Beijing. 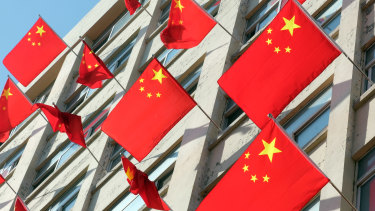 The Chinese embassy has ramped up its rhetoric due to Australia’s refusal to back down on its criticisms.Credit:Getty

While the Treasurer wasn't to know, the comments were made on the same day that China's embassy deliberately leaked a document to launch an extraordinary attack on more than a dozen decisions taken by the Australian government.

Frydenberg's offer should not be interpreted as a sign the Morrison government is looking to sell out its values or interests to get out of the diplomatic freezer.

But it could be widely interpreted that way, which is a concern in and of itself.

In truth, Frydenberg's comments that Australia stood ready to engage in "respectful and beneficial" dialogue were rather unremarkable and did not contradict what Trade Minister Simon Birmingham has been saying for months. Birmingham has said the Australian government would like to have ministerial communications with China, but it wouldn't deviate from its values, security and interests. 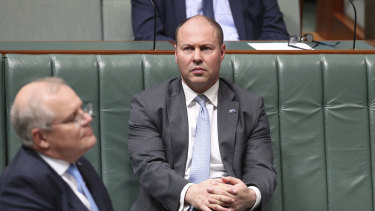 Treasurer Josh Frydenberg says Australia is prepared to have conversations with China about the diplomatic relationship.Credit:Alex Ellinghausen

But it was the first time the Australian Treasurer was inserting himself in the China debate in a substantial way. And with Scott Morrison in Tokyo signing a major defence pact with Japan and issuing a joint communique decrying Beijing's behaviour in the South China Sea, East China Sea and Hong Kong – the timing was jarring.

Frydenberg's comments don't need an over-reaction; the Prime Minister and his office saw the speech before he made it, and did not have a problem.

But at a time when Beijing is looking for any sign that its economic coercion is working, why do it?

As revealed by Nine News, The Sydney Morning Herald and The Age, China's embassy in Canberra has a list of 14 grievances about Australia. In leaking this list to the media, the message was clear: if Australia backed away from policies on the list, it "would be conducive to a better atmosphere".

Australia would not consider addressing many of the apparent demands – such as reversing its decision to ban Chinese telco Hauwei from next-generation networks or doing away with its foreign interference laws. Other grievances, such as negative media coverage of China in Australian media, are beyond the power of a democratic government to control.

It is difficult to argue with the embassy's attack on Liberal MP Eric Abetz for calling on three Chinese-Australian witnesses to denounce the Chinese Communist Party during a parliamentary inquiry. It's a good reminder that such a heated debate can play right into Beijing's hands.

While the Morrison government would like to resume leader-to-leader dialogue – or at least minister-to-minister dialogue – it is not prepared to trade away anything substantial to achieve those ends. Frydenberg's speech does not change this.

At any stage this year, Australia could have sent a signal that it will not talk publicly about issues such as the South China Sea and Hong Kong, in return for talks suddenly resuming at the ministerial level.

With the election of Joe Biden, there may be calls for Australia to do this – lest it be isolated by a shift in emphasis from the new US administration. This line of thinking completely ignores the fact that Biden is stronger on China's human rights record than Trump, and that the centre of gravity on the question of Beijing has completely shifted in Washington, including within the Democratic Party.

Of course Australia wants to restart dialogue with the Chinese government. But as it stands, nothing has changed.

So keep doing nothing – until the right time.