People with higher levels of education and those born overseas are more likely to be taking substantial measures to limit the spread of the coronavirus.

An Australian Bureau of Statistics survey into how households are responding to the pandemic, released on Monday, shows about 95 per cent of people are keeping their distance from others as one way to stop the transmission of the virus.

But among a host of other ways to protect themselves, a person's education level reveals substantial differences.

Of those with a non-school qualification, more than 34 per cent had worked from home over the past month compared to fewer than 14 per cent of those without.

People with a non-school qualification were more likely to keep their children out of school or childcare, cancel or change personal travel plans, or abandon a planned family gathering. They were also more likely to stop working altogether or drop a shift, buy extra household or medicinal supplies, or avoid public spaces and events.

About a quarter of people without a non-school qualification wore a face mask, compared to almost 29 per cent of those with a qualification. 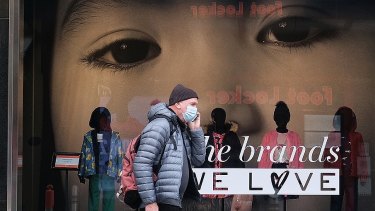 The survey found 42 per cent of people born overseas wore a face mask at least once in the four weeks ahead of the survey. Among Australian-born respondents the level was just 20 per cent.Credit:Luis Enrique Ascui

Schooling was not the only indicator of a different approach to coronavirus measures.

The survey found 42 per cent of people born overseas wore a face mask at least once in the four weeks ahead of the survey. Among Australian-born respondents the level was just 20 per cent. Almost two-thirds of overseas-born residents avoided public transport compared to 49 per cent of those born in Australia.

People born overseas were more likely to report concern about their personal health because of coronavirus than locally born people. Women and people over the age of 65 were also more likely to have health worries due to the pandemic than men and those aged between 18 and 64.

A key part of the Morrison government's response to the pandemic has been financial support to households, including two separate payments of $750 to pensioners and carers.

The survey found of the $750 payment made in May, 29 per cent of people added the cash to their savings, 28 per cent paid bills and 12 per cent used it for food and non-alcoholic drinks.

ABS's head of household surveys, Michelle Marquardt, said the survey revealed the economic and social impacts of the pandemic.

While almost a third of those surveyed received a payment during May, it was heavily skewed towards those over the age of 65, with almost 70 per cent getting the cash.

Younger people were much more likely to use the money to buy household supplies, medical services or clothing and footwear. Almost 46 per cent of people over 65 added the cash to their savings.