Follow
Home » Lifestyle » Cruises Come With Human Health Risks. They Can Be Just As Harmful To The Environment.

Cruises Come With Human Health Risks. They Can Be Just As Harmful To The Environment.

In 2012, London-based couple Ben Hewitt and David McDonald were invited to a friend’s wedding they feared was going to be “awful.” The ceremony was taking place on a cruise ship and the pair, then 27 and 22, dreaded all the cruising clichés ― stale buffets and overcrowded swimming pools. But they ended up loving the experience so much ― “It’s like a resort at sea,” said McDonald ― that they’ve taken 29 more cruises, averaging three or four a year.

“There’s been a huge change, even in the eight years we’ve been doing this, where cruise lines are actively aiming towards millennials and young people,” said Hewitt, now 35. Seems like that was working. When Hewitt and McDonald started documenting their cruises on YouTube three years ago, the average age of their audience was 45 – now, it’s 35.

A report from the Cruise Lines International Association (CLIA) in December found that 71% of millennials had a more positive attitude about cruising than two years earlier. And research firm Mintel found last spring that more than a third of people interested in taking a cruise over the next five years were between 16 and 34 years old.

Overall, 17.8 million people went on a cruise in 2009. In 2019, it’s estimated that the industry surpassed 30 million voyagers for the first time.

Yet it’s increasingly apparent there are some serious downsides to this vacation vehicle. As everyone has just been reminded, cruise ships can be breeding grounds for disease, like the coronavirus that stranded people aboard the Diamond Princess in Japan and the Princess Cruises ship off the coast of California.

Most cruises don’t lead to illness and quarantines, of course. But the ships still leave long and lasting wakes of ecological damage. And that could be an issue for all those future millennial and Gen Z passengers, the two generations most concerned about the environmental impact of their actions. 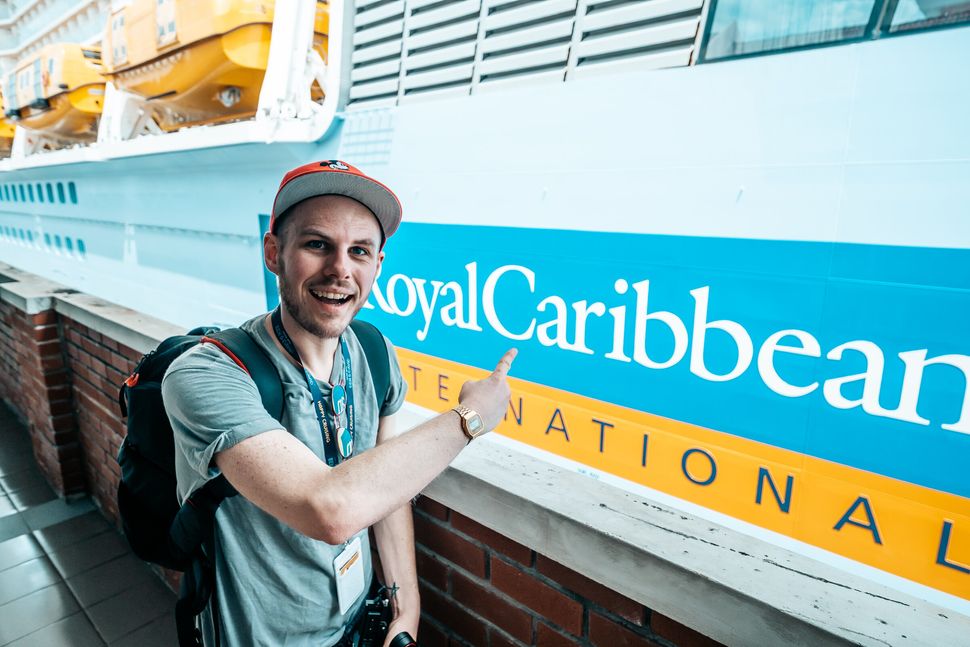 The millions of passengers aboard these “floating cities” generate millions of tons of waste that pollute both the sea and air, with devastating consequences for human and marine health. That waste is often illegally dumped overboard and companies have been fined millions of dollars for polluting oceans with sewage and garbage.

On top of this, cruises are “about the most energy- and emissions-intense form of tourism,” said Eke Eijgelaar, a researcher at the Centre for Sustainability, Tourism and Transport at Breda University in the Netherlands. According to a frequently cited study from 2008, cruises emit about three to four times more carbon dioxide per passenger-kilometer traveled than flying ― and, Eijgelaar estimated, about 9 to 10 times more than an average vacation by car or coach bus.

Air pollution is one of the most troubling impacts of cruising. Most cruise ships use a sulfur-heavy fuel, which is 3,500 times more polluting than road diesel.

Sulfur emissions can lead to acid rain, which can harm forests, soil and lakes ― trees die and fish eggs won’t hatch. The emissions have also been linked to respiratory problems. A 2018 report in the journal Nature Communications found that sulfur-laden shipping fuel causes 400,000 premature human deaths a year. 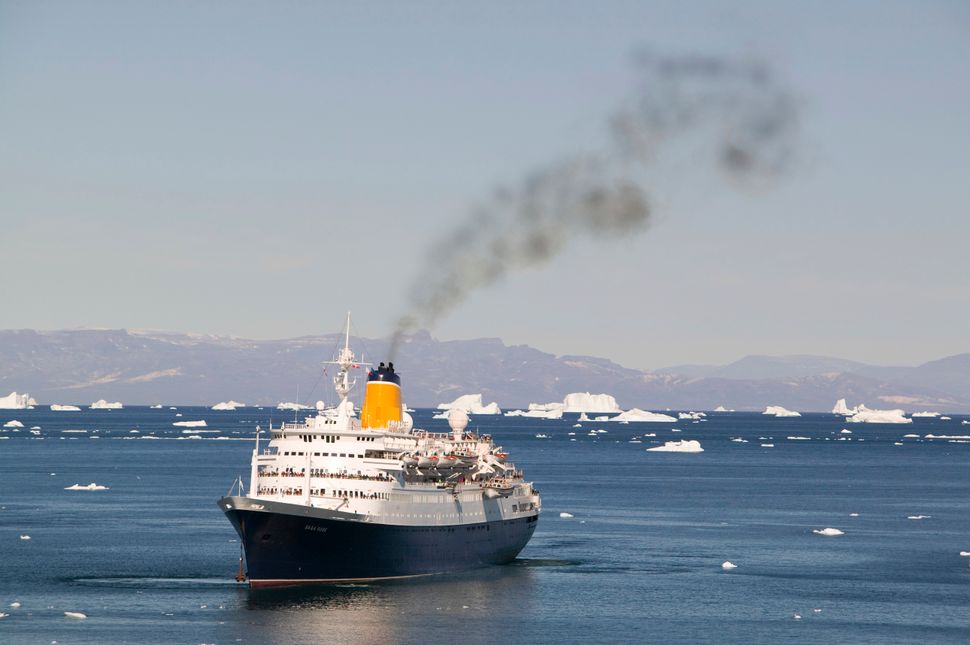 There are moves to switch to less-polluting fuel. Starting Jan. 1, 2020, new rules by the International Maritime Organization (IMO) dictate that ships are only allowed to use fuel with a sulfur content of 0.5%, compared to the 3.5% previously used. An IMO spokesperson said the transition to low-sulfur fuel has “gone smoothly,” with little disruption to marine transportation.

To avoid the higher costs of low-sulfur fuel, many ships are instead using gas cleaning systems known as scrubbers to “clean” high-sulfur fuel. In the scrubber, the exhaust gas is passed through water, removing the sulfur oxides and forming sulfuric acid. The wastewater from the scrubbing process is corrosive until it is diluted and neutralized with seawater.

Experts fear that while scrubbers may cut air pollution, they may increase pollutants pumped into the sea. Transport & Environment has warned that increased wastewater can create toxic sediment around ports and harm wildlife. But CLIA says that independent studies it commissioned show scrubbers have limited impact on marine environments.

The IMO notes that while its regulations permit scrubbers, it has strict rules for the acidity levels of discharged wastewater.

Not everyone is unconvinced this is enough. “Scrubbers are problematic ― several courts and jurisdictions have banned the use of scrubbers or the discharge that scrubber waste has generated,” said Marcie Keever, the oceans and vessels program director for Friends of the Earth. “[Cruise lines] need to reach for the sky when it comes to cleaning up these ships rather than just continuing with what is legally required or, in many cases, lobbying for weaker restrictions.”

And remember, sulfur pollution is only part of the environmental damage caused by cruises. Since 2009, Friends of the Earth has been producing “Cruise Ship Report Cards” that grade cruise lines on how they treat their sewage (in 2014, over a billion gallons of sewage were dumped from cruise ships into the ocean, much of it raw); their efforts to reduce air pollution; whether they’ve violated any water pollution standards or broken environmental laws; and how transparent they are about their environmental practices.

In 2019, nine out of the 16 companies evaluated received an “F” grade. Five more were given a “D,” including two major cruise companies, Florida-based Royal Caribbean and Swiss-based MSC Cruises.

Ocean pollution can be extremely damaging to marine life. According to the conservation group Oceana, bacteria in sewage can harm both fish and coral, while oil and trash can hurt turtles and birds.

Even when cruise companies are held accountable for their pollution, it makes little long-term difference, Keever said. “Carnival Corporation made $3.2 billion in profit in 2018. … So when you’re talking about a $40 million fine, it truly is a drop in the ocean for a company this large. And it does nothing to truly remedy the pollution that’s happening.” 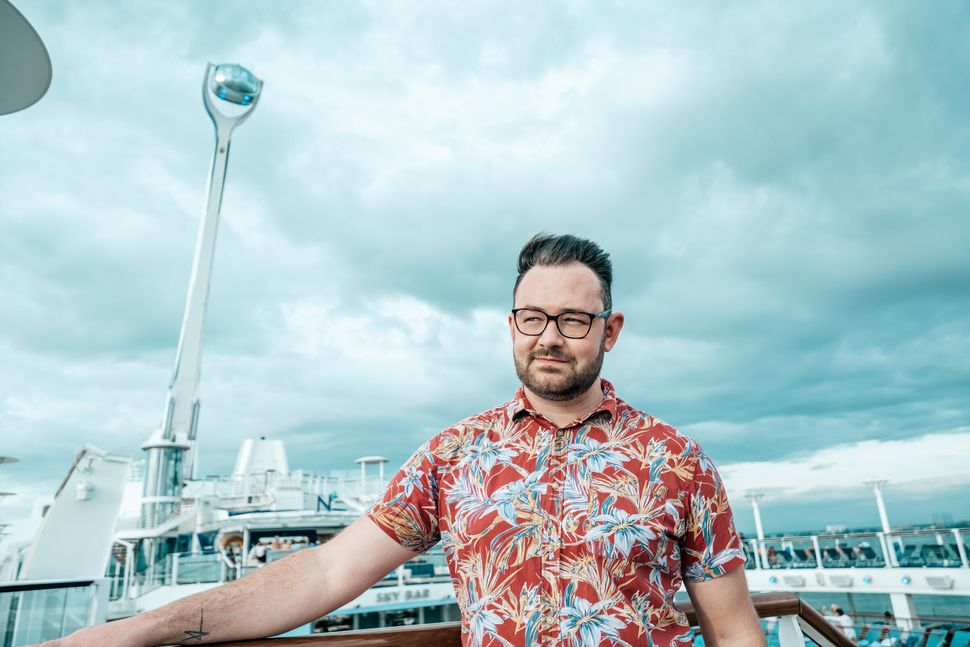 So how does all of this square with the industry’s growing millennial customer base?

Hewitt and McDonald describe themselves as passionate about the environment. They write about environmental issues in their blog, sharing stories about new initiatives, and McDonald said consumers should “use your wallet to back cruise lines that are trying to make changes.”

The couple also pointed to other positive steps they’ve seen onboard in the last eight years: the removal of plastic straws, buffet food that is cooked to order to avoid food waste, and refillable shampoo containers.

But they admit it’s a slow process. Change is “not happening fast enough,” said Hewitt.

Reading studies about air pollution deaths caused by cruising has also made Hewitt feel “like we have to do something to push cruise lines to be better.”

Some companies are doing more. Disney Cruise Line was the only company to receive an “A-” on the Friends of the Earth report card this year, in part due to its efforts to improve sewage treatment and water quality compliance. The company still performed poorly when it came to the nonprofit’s analysis of air quality.

Carnival said it too is taking steps to improve. Initiatives laid out in a “fact sheet,” provided to HuffPost following a request for comment, included reducing single-use plastics on its ships by 50% by the end of 2021, reducing food waste by 10%, replacing plastic balloons and glow-sticks with biodegradable streamers, and reducing sulfur pollution from its emissions.

A spokesperson from CLIA said that the industry’s policies and practices “often exceed those required by law” and that CLIA engages in research and development efforts toward more environmentally friendly tourism.

Yet can this ever be enough? “I don’t think a report card would ever hand out an ‘A+’ because that’s not really possible,” said Keever. “There’s going to be an impact from these ships. There’s more of them, they’re getting bigger, and they need to do more to clean up these ships.”

If the environment is important to you, she said, it’s “worth considering” whether you really want to cruise.

Ross Klein, a researcher with the Maritime Studies Research Unit at Canada’s Memorial University of Newfoundland and an international authority on cruises, said many of the changes that cruise lines make aren’t done out of a commitment to the environment.

“The industry doesn’t acknowledge the challenges in a serious way. They see environmental issues as a public relations campaign,” he said. Klein argues that touting environmental credentials to eco-conscious millennials is simply “a means to increase revenue.”

Eijgelaar echoed this sentiment, suggesting that any cruise line claiming to be eco-friendly today is simply “greenwashing.” 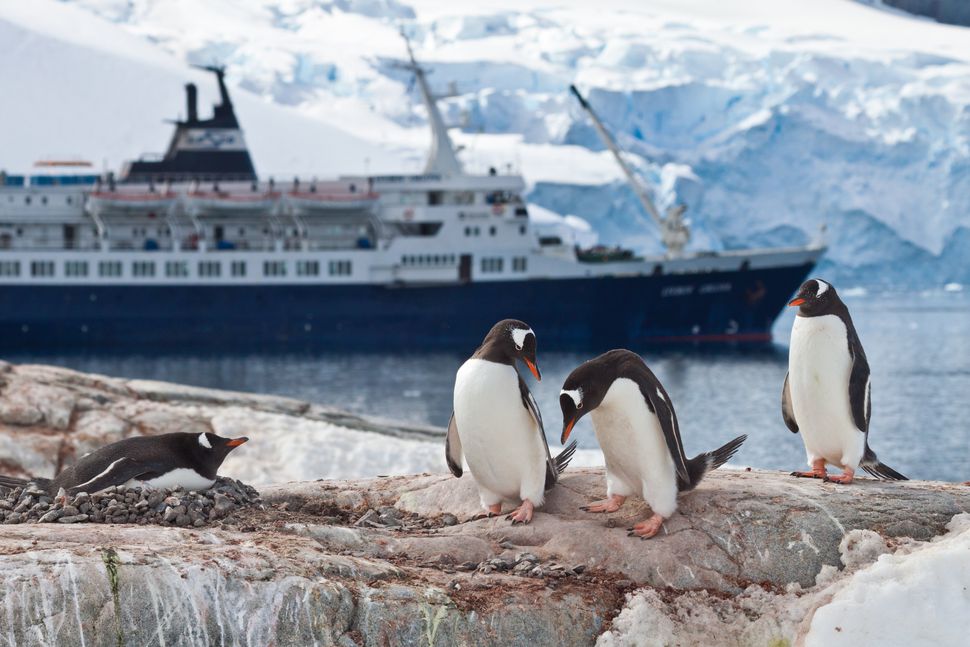 If you chose to cruise, note that the locations your ship visits are also crucial, as pollution damages the port cities where the ships dock. And increasingly, cruises are seeking out more remote, once-pristine destinations.

Tourism to Antarctica, for example, has increased 50% in the last four years. Scientists warn that more visitors mean greater damage to an already fragile environment ― foreign species are being introduced, local wildlife can be frightened, and graffiti has even been found on historic structures.

Eijgelaar has studied “last-chance tourism,” the phenomenon of people traveling to areas like the Great Barrier Reef and Antarctica before climate change destroys them forever. “An American doing an Antarctic cruise will easily emit five tons of CO2 on that trip ― a ridiculous amount for seeing a continent endangered by these same emissions,” he said.

He is not optimistic about the ability of the cruise industry to seriously reduce its environmental footprint. Eijgelaar said the ideal future of cruise tourism “would include fully battery-powered, zero-emission ships, with waste and wastewater cleaning systems that are in full-time operation.” But he added, “We won’t see this happening in the coming years or decades.”

Ultimately, cruises are “rather counter-productive to all the climate measures we should be taking,” he said, “particularly on an individual level.”

When asked if they would stop cruising on lines that don’t make enough effort to change, millennial travelers Hewitt and McDonald said “absolutely.”

HuffPost’s “This New World” series is funded by Partners for a New Economy and the Kendeda Fund. All content is editorially independent, with no influence or input from the foundations. If you have an idea or tip for the editorial series, send an email to [email protected]

air poll, oceans, this new world
You may also like:

Personal trainer has BOTH legs amputated after snowboarding crash