There were 46 good reasons for Scott Morrison to race from a carmaker’s office to an Italian café, a barbershop and a Chinese restaurant in the space of just a few hours one morning in Melbourne this week. There were just as many good reasons for him to dash from an electrical engineering company to the Port of Newcastle in NSW the previous day. And he has good cause to plan the same for Melbourne again on Friday.

The Prime Minister is making up for lost time. He spent 46 days in isolation or home quarantine during the middle of this year, thanks to lockdowns and restrictions when he returned from overseas travel. Now, finally, with no home quarantine required after his trip to Europe last week, he can be on the move where it counts most. 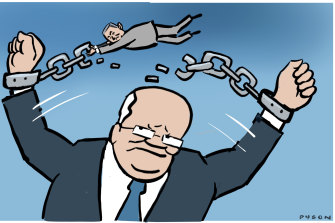 Why? Morrison has no time to waste. He is playing catch-up. Anthony Albanese ran rings around the government in the middle of the year while Morrison was stuck in Kirribilli House and The Lodge. The Labor leader stayed out of Sydney while it was in lockdown and had the freedom to visit marginal seats in Queensland and Tasmania, some of them two or three times.

Albanese did the same last week. While the Prime Minister was in Rome and Glasgow, the Opposition Leader was in NSW marginal electorates such as Banks, Reid and Robertson. He even got to New England to give Nationals leader Barnaby Joyce a tickle, then down to Melbourne to campaign in the new seat of Hawke, considered safe Labor territory.

No wonder Morrison was talking about freedom so much this week. He finally has it and wants to use it. He also wants voters to think that the way to get more of it is to keep him in his job.

His campaign theme was unashamedly Liberal. It was not hard to see the focus group research in his message about “can-do capitalism” solving climate change, as if voters could rely on the conservative side of politics to let business cut greenhouse gas emissions. This has been an effective message for Liberal governments for years. John Howard had the same refrain in his time as prime minister, while Tony Abbott turned “direct action” into a winning campaign pitch.

If only this mythical free market was really at work. Small government? As if. Canberra is more about state capitalism these days. Thanks to the coronavirus, Morrison has been running one of the biggest interventions in the economy in Australian history. And some of this will continue if and when the pandemic ends.

On climate change, for instance, the government is spending at least $20 billion in taxpayer cash while pretending business is doing it all. It is unapologetically using entities such as the Clean Energy Finance Corporation, which Labor and the Greens established and which the Coalition tried to scrap. What Abbott abhorred, Morrison applauds. He acts as if it is all his own idea. 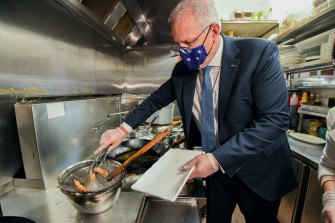 Prime Minister Scott Morrison, pictured in Melbourne this week, is making up for lost time.Credit:Joe Armao

The Prime Minister’s repositioning this week involved telling more than a few fibs. Asked on the Seven Network about his claim at the last election that Labor wanted to “end the weekend” by encouraging electric vehicles, he misled. “Well, Bill Shorten and the Labor Party wanted to force people to do this,” he said. Not so. The Labor policy was an aspirational target with no mandate.

Morrison also said Labor would increase the cost of living. “They want to put up your petrol prices,” he said. Yet the Labor policy at the last election was merely to “consult” on the timetable for changing vehicle emission standards – something the Coalition has consulted on for years.

Morrison made his claim for a reason. Labor does not know how to respond in public with a unified response to Paul Keating’s argument this week that Australia should make peace with China and, inevitably, wave away the fate of 24 million people in Taiwan. Albanese is being wedged: Keating on one side, Morrison on the other. This squeeze can split the caucus and weaken Albanese before the election campaign even begins.

The Prime Minister’s rallying cry about freedom was mostly a domestic play, of course. The Morrison team is confident his message will tap into the frustrations in the community about being kept at home by their state premiers – most of them Labor ones.

“We’ve got a bit used to governments telling us what to do over the last couple of years. I think we have to break that habit,” Morrison told the Victorian Chamber of Commerce and Industry on Wednesday.

That message echoes British Prime Minister Boris Johnson, another politician who knows how to get media attention with a haircut. In the same way Johnson talked about allowing extraordinary state powers to lapse after the pandemic, Morrison has given up power in one key area: Australians are once more free to leave the country. The rest, of course, is up to the states.

Nationwide, almost half thought the pace was about right. Morrison’s new message will not suit everyone but his campaign for “freedom” will play to the Liberal base while winning some of the middle ground.

He is on familiar turf: reluctant to lock down, eager to open up. It is the same stance he took in March last year when NSW and Victoria joined forces in national cabinet to impose stronger restrictions.

This time, however, his message could resonate in a vaccinated nation that wants to stretch itself after being cooped up at home. Labor mocks the “meaningless slogans” of this week’s campaign blitz. But mocking them is not the same as beating them.

The psychology of voicemails: are they really dead?