The Coalition MP tasked with overseeing the Great Barrier Reef has warned the federal government it cannot allow the coronavirus pandemic to reduce its climate change and environment action, as the reef can't cope with funding cuts.

"Cutting funding would be a very, very foolish thing to do. I understand we are in all sorts of problems economically, but we need to maintain a priority for climate change and for the environment," Great Barrier Reef Special Envoy Warren Entsch told The Sydney Morning Herald and The Age.

"It would be false economy not to make sure we maintain our investment in the reef. It's been quite significant to date, but we haven't dealt with all the issues yet."

Initiatives to improve the environment and reduce global warming "may end up being deemed as 'less-essential' in the post COVID-19 wash up", he said.

"While I agree that we need to shore up our economic situation and lead a growth-orientated response, I believe that in doing so, we must not accept a scaled back response to climate change. If anything, it should be greater." 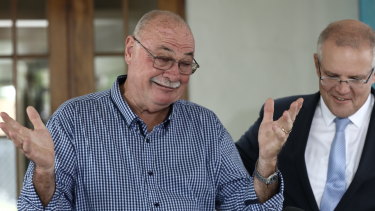 Mr Entsch was appointed to the Special Envoy role after the May 2019 election to consult with scientists, community groups and industry and advocate on policy development.

Ms Ley said Mr Entsch was doing an "an outstanding job" and the government was acting on the issues he raised.

"He highlights the absolute importance of investing in the environment and in the Morrison government maintaining strategies to reduce global emissions, and that is exactly what we are doing," Ms Ley said.

The federal government and agencies have committed to invest up to $200 million in research to improve the resilience of the reef to climate change, with the aim of attracting $100 million from private investors as well.

While Mr Entsch's report was submitted to Ms Ley, he said he continued to "make representations" to Emissions Reduction Minister Angus Taylor over the growing impact of global warming on the World Heritage listed coral ecosystem.

The federal government's Great Barrier Reef Outlook Report for 2019 showed "the ecosystem is still deteriorating" and found global warming to be its biggest threat.

A recent study by the Centre of Excellence for Coral Reef Studies found more than 60 per cent of the reef ecosystem had suffered in a bleaching event caused by global warming earlier this year. The Intergovernmental Panel on Climate Change predicts the current trajectory of global warming will lead to decline in more than 90 per cent of coral reefs around the world.

Mr Entsch said the government's international reputation on the environment went "hand in hand" with its record on greenhouse gas emissions.

"While we do great work on the Reef and globally we are recognised as the best reef managers in the world, conversely Australia's record on climate change falls short of attaining similar levels
of prestige," he said.

', Be, cutting, funds, Green, Would
You may also like: