When will Mayor Sadiq Khan stop posturing and fight for his dying city? DAN HODGES says the London Mayor’s whingeing must end and he needs to begin to rally his city

When is someone going to speak for London? The greatest city on the planet is being left to die a slow, silent death. Every day in the capital is like a Sunday now. The Square Mile lies largely abandoned.

Whitehall is solely patrolled by armed police and a small handful of inquisitive tourists. Footfall on Regent Street – which once contemplated introducing pedestrian speed lanes to manage the congestion – has collapsed.

Yet our capital has no champion. Sadiq Khan was elected with a mandate few modern politicians could even dream of. Yet the Mayor of London has opted to become the Moaner of London.

Every day sees a new attack on national Government. Over the furlough scheme. Over the Transport for London funding settlement. Over his claim that No 10 has ‘got it in for’ his city. 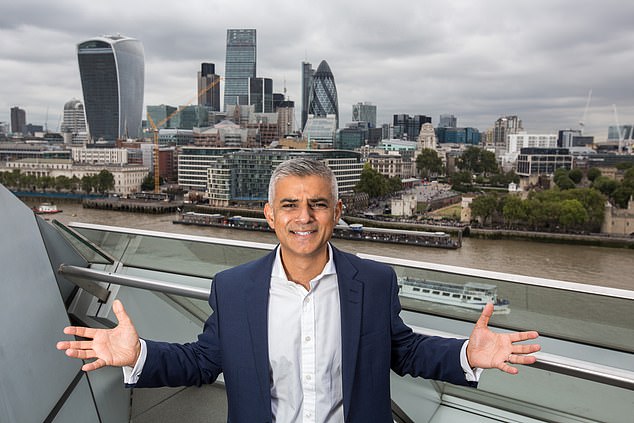 Sadiq Khan (pictured) was elected with a mandate few modern politicians could even dream of. Yet the Mayor of London has opted to become the Moaner of London

Once that would have simply been smart politics. Defining yourself against what you portray as a malicious national administration usually pays dividends for those elected to regional office.

Rory Stewart has walked off the political stage. The risk of Corbynite deselection – once viewed as a genuine danger by City Hall – no longer exists.

And still there is a vacuum of leadership – even though the Covid crisis sees London more desperate for a true leader than at any time since Hitler’s bombs were landing on her docks.

On Friday the Government announced it was about to launch a campaign to get people out of home-working, and back to their offices. 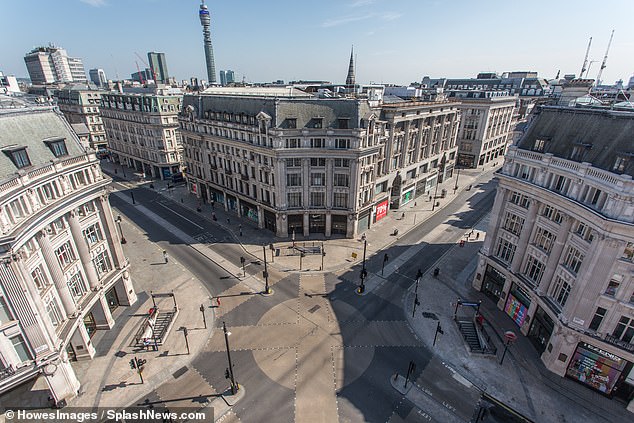 Oxford Circus in London is pictured on May 20, two months after the Government imposed lockdown on Britain

That was the perfect opportunity for Khan to head up the charge. His city is turning into Britain’s Chernobyl.

Londoners have to go back to work, or their capital will become a wasteland. But instead of seizing the moment, he decided to turn his fire on Boris, and call for another £27 billion handout.

On one level Khan is merely another victim of the Covid culture war. It’s no longer possible – if it ever really was – to have a rational discussion about responses to this pandemic.

He knows the economic reality of London’s half-empty shops, restaurants and office blocks.

But his tribe will not let him acknowledge it. To them, a call for a return to work is the moral equivalent of sending people over the top at the Somme.

So in the same way those furiously opposing the ‘premature’ reopening of schools led the attacks on the ‘exams fiasco’, so Khan is cutting across the Government’s pleas for people to return to work by warning of the disastrous economic impact of not letting everyone stay at home on furlough.

And this is set against the other reality – one Khan is only too well aware of – of the true Covid picture in his city. 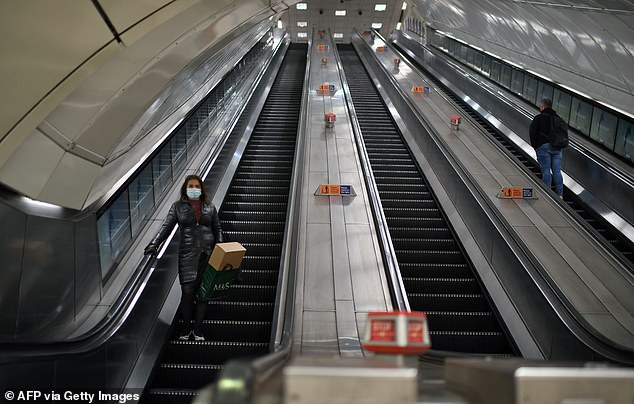 A commuter wearing a face covering on the empty escalators at Waterloo Train Station in central London on May 13, 2020

His office publishes weekly figures on the impact of the virus across the capital. The latest reveals: ‘In the week ending August 27, 2020, in London hospitals, six people who have tested positive for Covid-19 have died.

‘Additionally, Covid-19 was mentioned on the death certificates of five people.’ At the last census London had a population of 8.1 million.

But still London is left to wither. People have – rightly – been critical of the shambolic mixed messaging coming from Ministers.

But where too is the clarity of messaging from London’s Mayor? Where is the energy and determination to grab his city by the scruff of the neck, and drag it back to its feet?

Last Tuesday there was an instructive moment. Tom Cruise – who has put his money where Khan’s mouth should be and returned to work in London on his latest Mission: Impossible film – drove around Central London in a cab, chatted to passers-by, then turned up at a Waterloo cinema for the screening of the film Tenet. His message – ‘It’s great to be back in the theatre’ – went global. 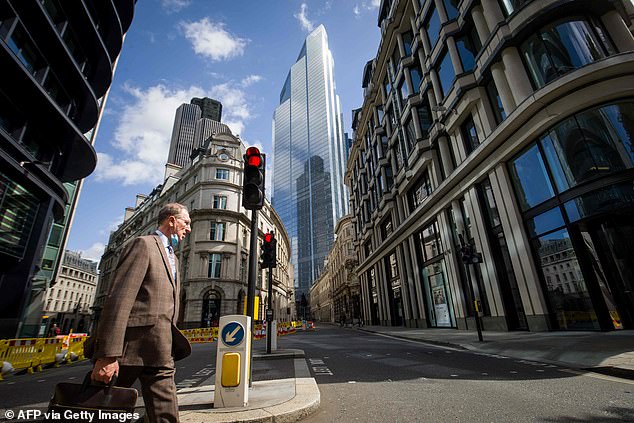 A man walks across the street during lunchtime in the City of London on August 21, 2020

Usually so fond of being photographed on red carpets, now Khan’s contribution was a short tweet claiming ‘London is open’.

Quickly followed by the chilling warning: ‘This pandemic isn’t over. @MetPoliceUK will be out this bank holiday weekend to support communities and keep us all safe. Think twice before planning to attend large gatherings.’

London’s open. But not that open. There was a moment – just when the pubs and restaurants first began to raise their shutters, and everyone embraced the sunshine and Covid cafe culture – when the city’s spirit seemed to be returning. But now autumn is approaching, and the lifeblood is again being drained from the capital’s veins.

Why can’t Khan see that? This was his opportunity to be London’s Rudy Giuliani in the wake of 9/11. But he seems intent on sulking and posturing it away in an effort to settle scores with No 10.

One of the bizarre things about the Covid crisis is the way it has inverted traditional political orthodoxy. It used to be the Right that claimed mass unemployment was a ‘price worth paying’ for the greater national good. 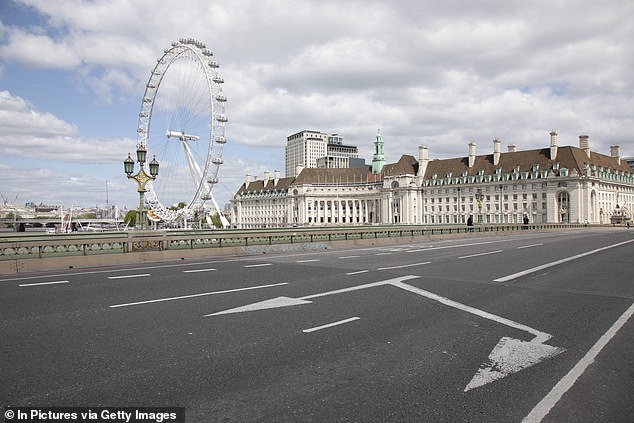 Westminster Bridge looking towards the London Eye, was eerily quiet, devoid of traffic, and silent on empty streets as lockdown continued on May 11

But it’s now the Left that seems to view economic Armageddon as nothing but an unfortunate by-product of Covid.

What’s the problem? Chuck another couple of hundred billion here or there until no one in Britain tests positive, and everything’s sorted.

That view may play well among those economically and politically illiterate enough to think Jeremy Corbyn was the answer to the nation’s ills. But how can that be the perspective of the Mayor of Britain’s economic engine room?

Yes, his powers are limited when compared to his counterparts in the US or parts of Europe.

But they are not insignificant, as Khan has acknowledged through the tenacity he has shown towards anyone attempting to dilute them. ‘If they want more power in London they need to win the election,’ he recently goaded Ministers.

But that’s not true. Because every time Khan issues another attack on the Government, or makes another plea for yet another handout, he cedes more of his authority to his opponents. 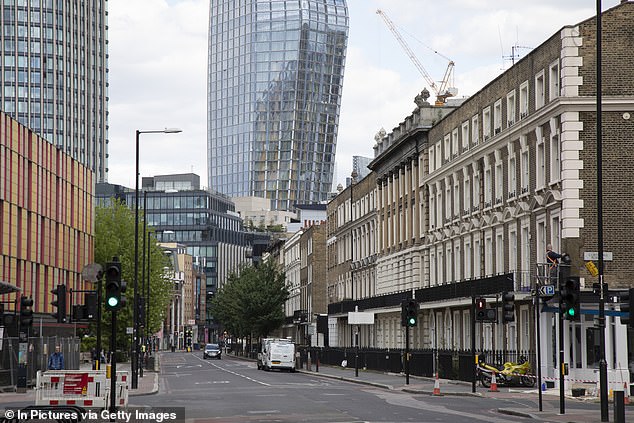 If the solution to London’s transport problems and crime problems and housing problems really is just more central Government cash, what do we need a Mayor and Assembly for?

If Boris really does ‘have it in’ for the city that set him on course for Downing Street, why not let him own his perfidy? Let’s do away with the middleman on The Queen’s Walk, and let Londoners judge for themselves what the Government is or isn’t doing for their capital.

One of the criticisms of Boris during the Covid crisis has been his over-reliance on stirring rhetoric and optimism. But his successor as Mayor is guilty of the opposite.

His powers are indeed limited, but he enjoys a massive personal mandate and platform. And it’s time Sadiq Khan started using them.

The whingeing needs to stop. The begging bowl has to be put down. And London’s Mayor needs to begin to rally his city.

The greatest city on Earth needs a champion. And it doesn’t have much longer to find one.

DAN, HODGES, London, May, says, the
You may also like:

Sarah Huckabee Sanders Reveals Why She Left The Trump Administration