DAN HODGES: Will any sum stop Keir Starmer wailing: It's not enough!

DAN HODGES: Is there ANY amount of public spending that will stop Keir Starmer wailing: It’s not enough! (Answer: Dream on)

Labour Transport spokesman Jim McMahon was incandescent. ‘We are not going to accept crumbs off the table,’ he raged as he tore into Boris for his latest act of perfidious betrayal. ‘We were promised that we would be levelled up, but what we have been given today is the great train robbery – robbing the North of its chance to realise its full potential.’

If anything, McMahon’s attack was a touch understated. He certainly failed to match the levels of anguish reached by Yorkshire Post editor James Mitchinson, who took to social media to proclaim: ‘When coal miners of the North – like my dad & his dad – had their livelihoods torn from them, their families suffered. My family. The proud industrial North, left to rot. What they have done today is worse.’

The response to the publication of the Government’s Integrated Rail Plan – which saw Labour and its allies trying to paint £54 billion of new infrastructure investment as the greatest crime against the North since the Peterloo Massacre – was hysterical and hyperbolic. But it was also instructive.

In February, when Sir Keir Starmer appointed Rachel Reeves as Shadow Chancellor, it was framed as a watershed moment. Reeves, an economist who had worked at the Bank of England and HBOS, would finally force her party to face up to the need to embrace fiscal responsibility. ‘Earning people’s trust that we will be responsible custodians of public money is the precondition for gaining the right to be heard on any other issue,’ she said in her first major speech in the role. 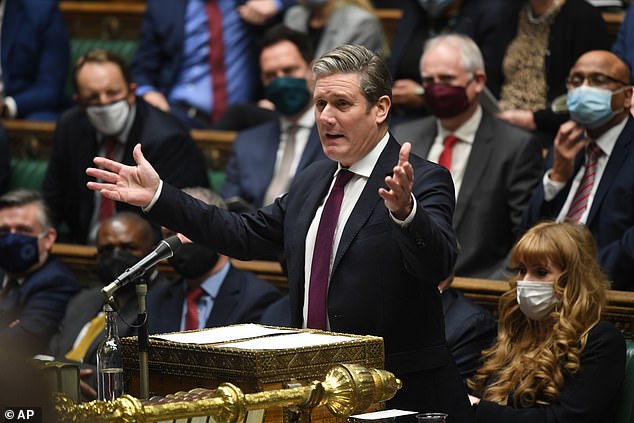 DAN HODGES: We now know what Labour’s real attitude towards public money is. They think £54 billion of it represents nothing more than ‘crumbs’

Well, we now know what Labour’s real attitude towards public money is. They think £54 billion of it represents nothing more than ‘crumbs’.

And we also know something else, which is that Starmer is about to hurl himself into the same political elephant trap that swallowed up Ed Miliband.

The political landscape Red Ed inherited was defined by the banking crisis and the deficit it spawned. But Labour couldn’t go cold turkey on its addiction to public spending. So Miliband’s strategy was simple – ignore it as an issue and hope it went away. He’d occasionally lambast David Cameron and George Osborne for their failure to gain control of the national finances. And in the next breath commit Labour to greater borrowing, more expenditure and ever larger debt.

Starmer is about to adopt the same approach, this time on Covid. He’s going to try to make voters forget the fiscal impact of the pandemic. The hundreds of billions on furlough. The additional tens of billions on an emergency expansion of the NHS. The vaccine and booster rollout.

Labour will attempt to close its – and the public’s – eyes to post-pandemic economic realities, demand the Government carries on spending as if a financial tsunami had never struck, and cry ‘Betrayal!!!’ at every fiscal adjustment.

While, of course, playing their trump card, the money ‘squandered’ on Test and Trace and the Tories’ ‘rich friends’. But there’s a problem with this strategy. The public record is not littered with Shadow Ministers furiously demanding ‘Where is the Test and Trace audit trail?’ or ‘Where are the PPP procurement guidelines?’ Instead, at the time Labour’s line was: ‘Forget the red tape, just get our nurses their masks!’

The other problem is whether that money really was recklessly squandered, or spent in a noble but misguided attempt to protect the British people from a deadly virus, is moot. The money has gone. Labour has no way to magic it back. And the argument ‘They wasted £30 billion on Test and Trace, so we’re going to splash another £30 billion on HS2’ simply underlines the party’s fiscal incoherence. 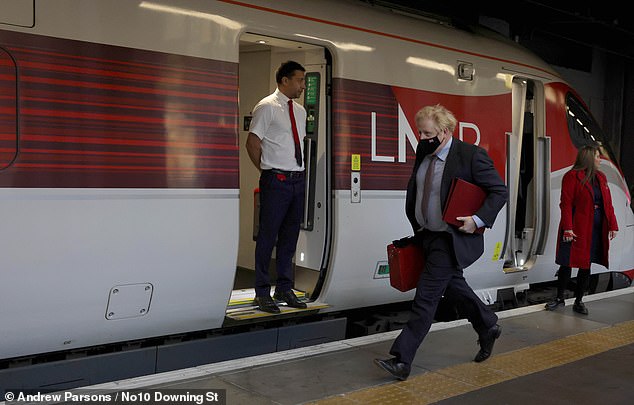 DAN HODGES: Starmer believed that last week’s announcement gave him an opportunity to drive a populist wedge between Boris and Red Wall Britain. But he miscalculated

And there’s one other problem with Labour’s strategy. It relies on treating people – in particular the people of northern England – as if they’re fools. Starmer believed that last week’s announcement gave him an opportunity to drive a populist wedge between Boris and Red Wall Britain. But he miscalculated.

First, he unwittingly reset the balance of expectation and reality with regards to the Government’s levelling-up agenda. It’s an open secret that Ministers have become increasingly frustrated at Boris’s habit of offering the stars, then only delivering the moon. ‘He makes promises that are undeliverable, we move heaven and earth to deliver half of them, and then it looks like a failure,’ one complains.

But now it’s Starmer who has overplayed his hand. ‘He’s telling everyone we’ve betrayed the North. But spades are going into the ground on these projects within months,’ one Government official explained. ‘That’s real investment, real jobs and real infrastructure. And the voters are going to notice it.’

Starmer doesn’t think they will. He believes a blizzard of negative headlines will obscure the reality of what’s just been announced. But as one Minister said: ‘Take the full Leeds-Manchester high-speed line. It would have cost £40 billion, been completed in 2043, and shaved four minutes off the 30-minute journey time of the upgrade we’ve just announced. The scheme we’ve unveiled costs £23 billion and will start delivering benefits in the 2030s. So they want to spend another £17 billion just for a rushed cup of coffee.’

Labour’s whole strategy is based on infantilising Northern voters, and hoping they don’t recognise this sensible fiscal compromise. And it’s based on another flawed premise. Which is that those voters’ perception of levelling up lives and dies on delivery of HS2. 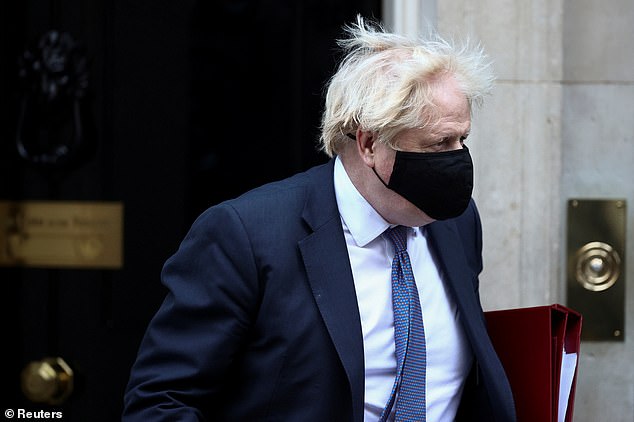 It doesn’t. As one Red Wall MP told me: ‘Shiny transport mega-projects aren’t the big issue in my constituency. Getting to grips with immigration and making sure we keep the shelves stocked concern people in my patch.’

Another Red Waller agrees: ‘Boris and Grant Shapps dealt with this one well. The PM had the backbenchers into No 10. Then Grant took them through the details, and showed them where the local wins were. There were a couple of people who were unhappy. But the general feeling is this is something we can sell on the doorsteps.’

Starmer has made a different calculation. He’s gambling that if he cries ‘It’s not enough!’ long enough and loudly enough, that will prove sufficient to bring Red Wall voters flocking back to the fold.

What’s more, as we move closer to the Election, that cry of ‘It’s not enough’ is set to become more deafening. The NHS. Schools. Police. Benefits. Tuition fees. Public-sector pay. Precisely where and when is Labour’s new commitment to fiscal probity going to reveal itself?

What is the issue that will finally see Labour’s Leader or Shadow Chancellor muster the courage to say to their party ‘OK, that really is enough’?

At the moment all the evidence is that day will never come. We now know Labour frontbenchers view £54 billion as petty cash. Starmer has already signed off on funding HS2 and the Northern Powerhouse plan in full, which, given the current uncertainty over inflation and interest rates, is the equivalent of signing a blank cheque. So if he can’t restrain his spending urges over a railway line, what hope is there when it comes to his party’s other sacred cows?

Labour’s leader thinks Red Wall Britain won’t notice. That his and his party’s continuing addiction to endless additional, uncosted spending will pass the voters by.

It won’t. Boris isn’t the person taking the North for mugs. Sir Keir Starmer is.