The official weather observing station in Death Valley, California — called Furnace Creek for obvious reasons — reached a scorching 128 degrees Fahrenheit on Sunday. That is the hottest temperature anywhere on the planet since 2017 and only one degree behind what experts say is likely the hottest temperature ever recorded on Earth.

This is just one small part of a brutal heat wave baking the deep Southwest and lower Plains states right now before expanding eastward and northward later this week. Dozens of records were set over the weekend and dozens more are on the way this week.

Excessive Heat Warnings and Heat Advisories cover 50 million Americans in an area stretching 1,700 miles from the deserts of Southern California to the beaches of Panama City, Florida. Temperatures today may top out over 120 in the deserts of California and Arizona, and near 110 in west Texas. Heat index numbers, which factor in humidity, will reach an oppressive 115 near Dallas and east to coastal Louisiana. 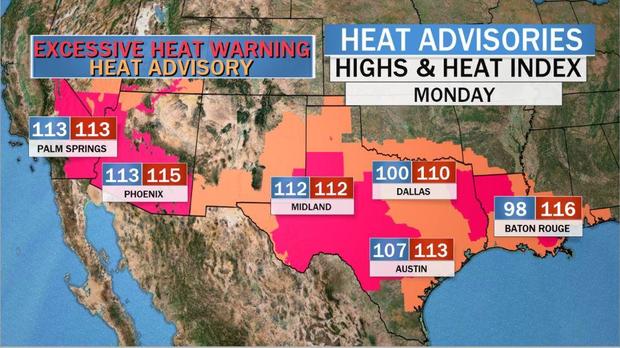 As the extreme heat settled in over the weekend various records were set. The most impressive was 128 degrees in Death Valley, California, on Sunday. Though this is the hottest temperature recorded on Earth in the past three years, it did not quite break an all-time record.

Extreme weather experts say it is just one degree short of the “real” highest temperature ever recorded on Earth — 129.2 degrees Fahrenheit, also in Death Valley, in 2013. The word “real” is used because the world’s hottest temperature is disputed within the meteorological community.

Officially the world record is 134 degrees Fahrenheit, set back in 1913 in Death Valley. But a thorough analysis by weather historian Christopher Burt in 2016 makes a compelling and generally accepted claim that the 1913 record is “essentially not possible from a meteorological perspective.” Instead he concludes it was likely an observer error.

While there are various reasons the 1913 record is now believed to be an error, the most compelling is how different the observation was to other observing sites in the general area. Because of the unique landscape and meteorology, the daily readings from the various observing sites in that area of the desert Southwest are almost always in lockstep with each other. But during that week in 1913, while other sites were around 8 degrees above normal, the Death Valley readings were 18 degrees above normal.

As a result, most extreme weather experts conclude the “real” hottest temperature ever recorded on Earth is 129.2 degrees in 2013, for which there is photographic evidence.

Along with Sunday’s Death Valley reading, there were many other daily records broken, as well as one all-time record set of 116 degrees at Borger, Texas, in the panhandle near Amarillo.

Other notable daily records include 121 degrees in Palm Springs, California; 116 in Phoenix, Arizona; 113 in Tucson, Arizona; 110 in Roswell, New Mexico; and 109 in Del Rio, Texas. Towns in Wyoming and Utah also hit record highs above 100 degrees. But perhaps the most impressive numbers were the heat index (“feels like”) numbers which reached near 120 in Oklahoma and Louisiana.

In New Orleans, the heat index in the middle of the night on Sunday was a sweltering 107 degrees.

These are the 1 AM (not PM) heat index values across the local area. Yep, its hot 🥵 #lawx #mswx #howlongtillwinter pic.twitter.com/ev5gQA89aP

The lowest the temperature dropped to on Monday morning in Phoenix was a balmy 93 degrees. This is the sixth day in a row in which the low temperature was 90 degrees or warmer in Phoenix. The current record is 7 days in a row in 2012 — a record which is likely to be tied and broken in the coming days.

Although our high temperatures in #Phoenix have been extremely hot this weekend, our low temperatures have been pretty warm as well. Our five days in a row of 90ºF+ lows is likely going on a sixth tonight, which will be the second longest streak all-time for #Phoenix! #azwx pic.twitter.com/fIUw7qTa2e

This intense heat is being caused by a near record-breaking mid-level heat dome centered across the southwestern United States. Over the weekend it reached levels which are rarely experienced. These mid-level heat domes cause sunny skies and dry, sinking air which warms the air column through compression, helping produce extraordinary heat.

Extreme – Record breaking – #heatdome on Saturday. The ridge at the 500 mb pressure level raised above 6000 meters (warm air expands). For perspective that seems to be at or above records for most of the SW US including Midland and El Paso, Texas pictured here. #heatwave pic.twitter.com/sUrh811ICR

The worst of the heat early this week will once again be centered over the deep Southwest and west Texas, where highs will again challenge many daily records near 110 degrees. 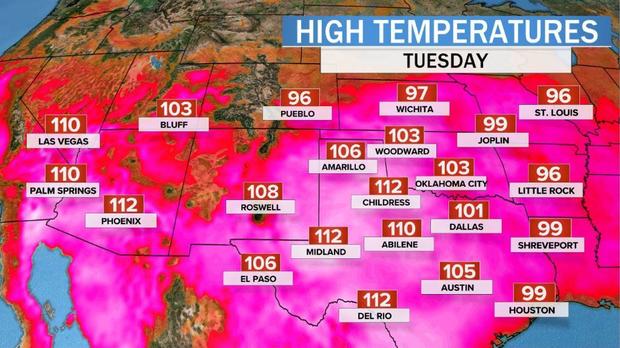 Looking ahead, this unusual heat dome will gradually weaken some over the next few days, but also begin to creep northward. This will allow the heat wave to spread into the mid Mississippi Valley and eventually into the Ohio Valley and Middle Atlantic area towards late week. By the weekend, much of the eastern two-thirds of the nation is forecast to reach highs in the 90s to near 100, with “feels-like” temperatures well over 100 degrees. This includes cities like St. Louis, Chicago, Indianapolis and Washington D.C. 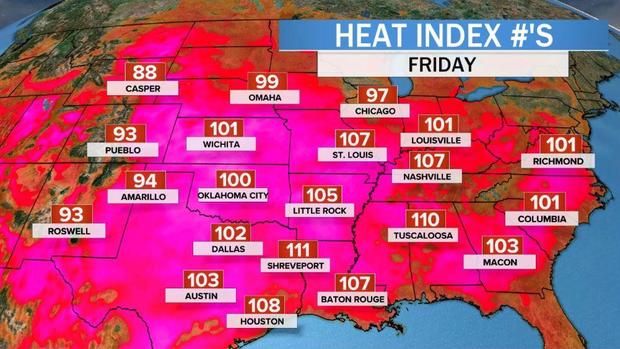 While heat waves of this magnitude are not unheard of in summer, climate experts expect them to become more common in the years ahead due to human-caused climate change. That’s because as global temperature averages increase, simple statistics show that heat extremes increase at an even faster rate. This will likely lead to a large increase in heat wave days across much of the nation.

Dr. Renee McPherson, university director of the South Central Climate Adaptation Science Center, says, “Our own projections indicate an additional 10-40 days per year of 100-[degree] days by mid-century, and up to two months (!) more of these extreme heat days each year by the end of the century, if we continue to increase our carbon emissions as we have in the past.”

In fact, in a middle-of-the-road carbon emissions scenario, which assumes some efforts to limit heat-trapping carbon in the atmosphere, the number of 100-degree days are expected to double, or even triple, in most areas by late this century.

And this is RCP 4.5 which is a lower emissions scenario. Again projected days with heat index values over 100 degrees. Images via Climate Toolbox pic.twitter.com/CM6ZRSOhIL

death valley, heat wave, Weath
You may also like:

'The Queens Gambit': Thomas Brodie-Sangster Breaks Free of the Teen Role Mold, So What Is Net Worth?

Queen Elizabeth Continues to Offload More and More Duties to Prince William and Prince Charles — Is Her Majesty Signaling She Is Ready to Step Aside?

Where to find the best deals on Christmas decor, including trees

Amazon's extended Cyber Monday deals are unreal—Bose, Shark, Sony, and Instant Pot are all on sale