Is it vandalism or art? Or something in between? 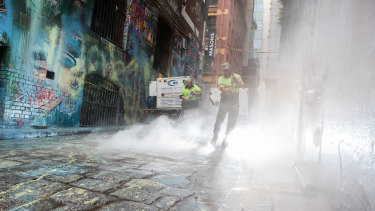 The coordinated action, which obliterated existing street art, was documented with a drone and cameras.

Melburnian man Joe Musco, who caught the action on video and shared it via Instagram, said a “lot of awesome artwork was destroyed. I don’t know mate but that’s just shit”. He labelled the men “hooligans”.

But others on social media were unsure if the lane, which has been painted and repainted on an almost daily basis for decades, was seeing just another chapter in the contested, ephemeral story of urban art.

And there was speculation that the blur was a guerrilla reaction to fears the lane’s art is being commoditised and commercialised, rather than reflecting Melbourne’s real street-art scene. 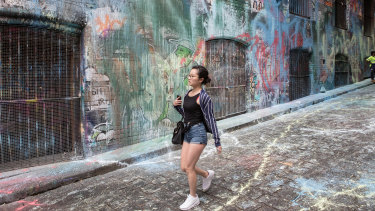 Art vandalism has a long history, sometimes committed by vandals intent on simple destruction, other times by artists who consider their act itself to be art.

In December, performance artist David Datuna ate a banana taped to a wall at Art Basel in Miami. The banana had just been sold for $120,000 as a “symbol of global trade”.

The fruit was replaced. Gallery director Lucien Terras said the artwork had not been destroyed: “The banana is the idea”.

The City of Melbourne acknowledges in its 2014 Graffiti Management Plan that protection of street art is not practical because it is “not meant to last”.

Hosier Lane’s graffiti tribute to firefighters, a koala with a hose which captured worldwide attention, remains intact at the other end of the lane.

Victoria Police have confirmed they are investigating the incident.

Art, Destruction, Hosier, Lan, or
You may also like:

Queen Bacardi: How Cardi B Became One Of The Most Influential Rappers Of The New Age