Devastating photo shows dad separated from his wife as she miscarried

‘He had nobody to comfort him’: Heart-rending photo shows a father breaking down alone behind a glass door after learning that his wife had miscarried – having been banned from going into the room because of COVID-19

A heart-wrenching image of a father learning that his wife had miscarried while separated from her by a glass door demonstrates the devastating image that the coronavirus pandemic has had on so many people.

Jared Gliem, from Harrisburg, Pennsylvania, broke down in tears when his wife, Sarah, 38, told him over the phone that they had lost their unborn baby girl Cameron.

The heartbroken father is seen in an image taken by his wife sitting on the floor behind a glass door, after he was banned from going into the hospital with her because of the strict regulations that have been put in place as a result of the COVID-19 pandemic. 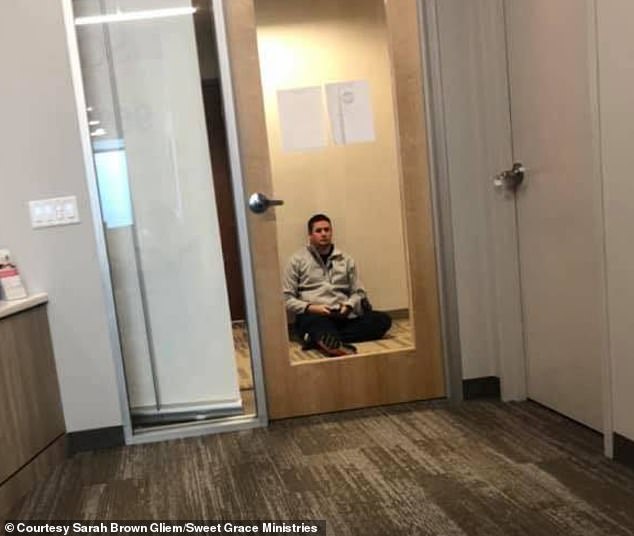 Heartbreak: A devastating image shows father Jared Gliem breaking down behind a glass door as he learned that his wife Sarah had miscarried. He was not allowed into the hospital with her

Writing on her blog, Sarah revealed that she and Jared had been self-isolating at home with their son Collin, when she realized she was bleeding. The parents, who lost another baby girl, Chloe, a stillborn, just over a year ago, then rushed to the hospital.

But once there, doctors refused to allow Jared inside with his wife – who revealed that she ‘began to sob’ when the couple was told that only Sarah would be admitted, and that her husband would be forced to wait outside.

Once inside, Sarah was told by doctors that she had miscarried the couple’s baby girl, news that she then had to deliver to her partner via speakerphone while he waited outside.

‘Jared wasn’t permitted even in the waiting room because of COVID-19,’ she wrote on her blog.

‘As I was checking in I was asking if he could come back with me because we thought we were having a miscarriage. When they said no I began to sob.’

Jared was able to see his wife through a glass door, and stayed in constant contact with her via text message, with the heartbroken mother recalling that he told her she ‘doesn’t have to be the superhero in every situation’ and that it was ‘okay not to be strong enough for this’.

But when Jared heard over speakerphone that the couple had suffered a miscarriage, he was unable to control his emotion.

‘As I laid on the exam table with Jared on speaker phone, we got the news that no parent ever wants to hear… again. There was no longer a heartbeat,’ Sarah wrote.

‘To say that I didn’t cry harder at hearing Jared through the phone is an understatement.

‘He had nobody to comfort him. Imagine sitting in a hallway crying because you found out your dream of becoming a parent to a breathing, warm, growing child was gone again.’ 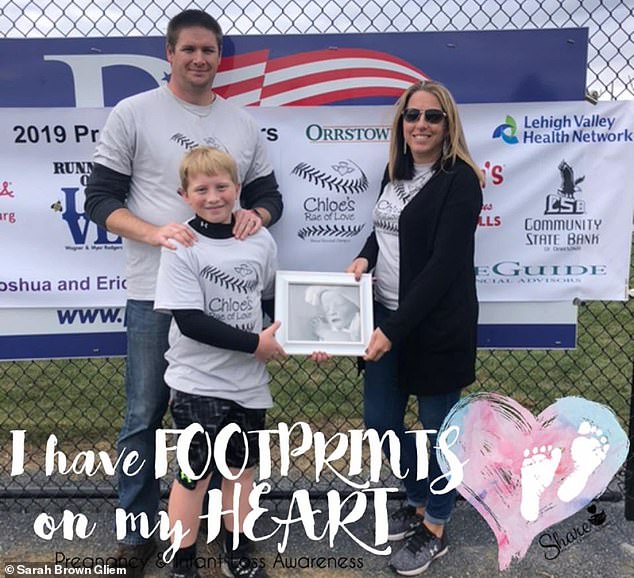 Spreading a message: The devastated mother, seen with her husband, son and a picture of Chloe, urged others to stay home and obey social-distancing rules for the sake of others

Although the miscarriage was not related to the coronavirus, Sarah expressed her anger and frustration at those who have flouted social-distancing and quarantine regulations – causing the outbreak to become increasingly worse, and leaving hospitals forced to separate loved ones, even during the most heartbreaking of cases.

‘We didn’t get to grieve together, we couldn’t even hug and tell each other it would be okay and we would survive this,’ she wrote. ‘Instead I was comforted by our doctor, got dressed, and finally got to see my husband and Cameron’s daddy.

The heartbroken mother then ended her post by pleading with others to ‘stay home’ and observe social-distancing and self-isolation protocols, if anything to save others from having to go through the same devastating experience that she and her family had to.

‘For the love of God, just stay home,’ Sarah said. ‘The next time you want to go out because it’s not that serious, just remember that a father couldn’t look one last time at his baby, and a mother had to get the worst news about their child alone.’

Dad, devastating, photo, SE, shows
You may also like: