Did Queen Elizabeth II partially die from a broken heart?

Did the Queen die of a broken heart? As she is reunited with Prince Philip, a doctor explains how losing her husband of 73 years may have played a role in Her Majesty’s death

A doctor believes Prince Philip’s death 18 months ago may have been a precursor to Queen Elizabeth II’s death at 96 – as the royal struggled to cope without her ‘strength and stay’.

The royal couple were married for 73 years before the Duke of Edinburgh died on April 9, 2021, just two months before of his 100th birthday. A portrait of Her Majesty mourning her husband alone wearing a black mask in St George’s Chapel in Windsor Castle on April 17, 2021, has become a powerful symbol of the destruction wrought by the Covid pandemic. It is also a pointed reminder of the loneliness she was forced to endure after the death of her devoted husband.

Dr Deb Cohen-Jones, an Australian GP, spoke to FEMAIL about what losing a loved one can do to the health of their partner – and whether it’s medically possible to die from a broken heart.

‘There is no strict science around it. But it’s definitely an observed phenomenon,’ she said on Friday.

‘It’s more about losing your ‘will’ than it is about your health in some ways.

From a physiological point of view, the loss of Prince Philip would have caused her severe stress, peaking her cortisol levels, and leaving her body to deal with that.’ 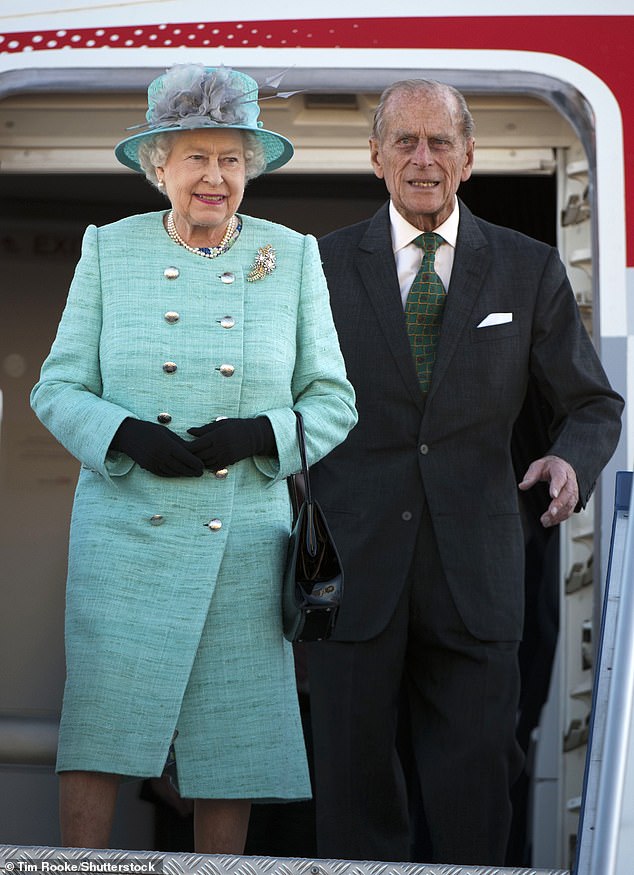 The royal couple were married for 73 years before the Duke of Edinburgh died on April 9, 2021, just two months shy of his 100th birthday (pictured Queen Elizabeth II and Prince Philip in Canberra) 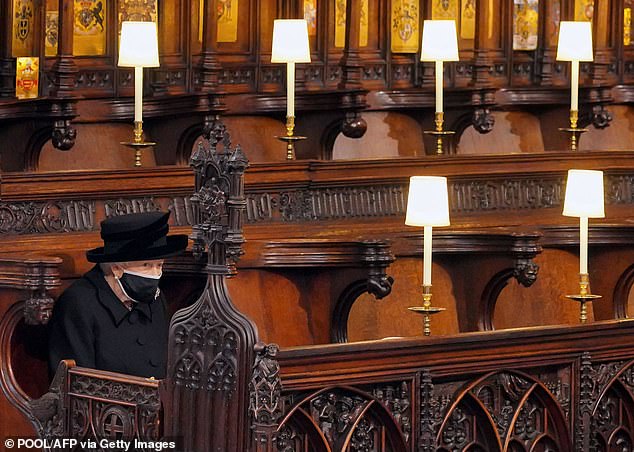 Stress, while sometimes downplayed as a consequence of hard work, can have profound and serious – sometimes fatal – affects on the human body.

Heart surgeon Nikki Stamp told the ABC that the stress of losing your husband or wife can cause a ‘chain reaction’ that can lead to death.

‘What we know is that for some people the stress of losing a loved one, or any kind of stressful event in your life, does precipitate a whole bunch of reactions in the physical body as well as in your mind that can cause disease and sometimes cause someone to pass away,’ she said.

‘And, of course, you start to do those things that maybe aren’t so good for you [when you’re stressed], such as burying your emotions in comfort food or not exercising, not connecting with people.

‘It’s certainly something that we’re discovering more and more lately.’

‘The Queen wore the trousers in public and he wore the trousers behind closed doors. She let him be master of the household so he ran all the palaces and he ran the royal business – he was the CEO of the firm,’ Mr Burrell said.

‘She sorely, desperately missed him and he’s waiting for her in St George’s chapel in Windsor and she will be beside him very soon.

While there is no suggestion Queen Elizabeth II died from a broken heart, her health certainly began to deteriorate after her late husband’s passing.

The 96-year-old suffered mobility problems that forced her to pull out of key events – including many of her Platinum Jubilee celebrations, opting to attend virtually or send senior royals in her place.

The monarch also spent one night in hospital due to a mystery illness last autumn. 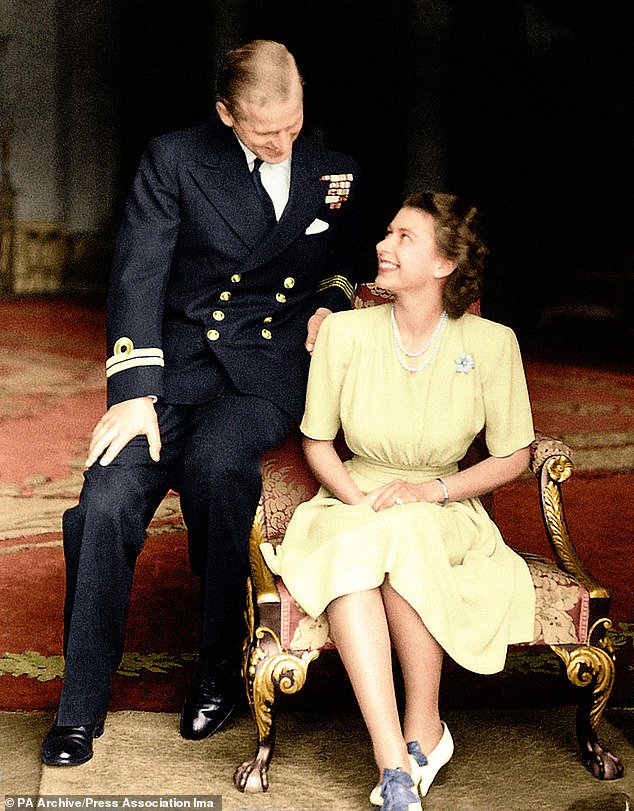 While there is no suggestion Queen Elizabeth II died from a broken heart, her health certainly began to deteriorate after her late husband’s passing

The Queen caught measles when Prince Charles was two months old in 1949 and had to be separated from her baby son.

The first time the Queen was actually admitted to hospital was in July 1982 when she had a wisdom tooth extracted at private clinic the King Edward VII Hospital in central London.

The Queen’s no fuss approach to injury and illness was perfectly illustrated in 1994.

She broke her left wrist when her horse tripped during a ride on the Sandringham estate in Norfolk.

The break was not diagnosed until almost 24 hours later when her arm was X-rayed and set in plaster at a hospital.

It was the first time she had fallen in many years and the Queen had simply brushed herself down, remounted her horse and trotted on back to Sandringham.

The Queen underwent operations to both of her knees in 2003.

The first, on January 13, removed torn cartilage from her right knee, while the second, on December 12, was a nearly identical procedure to her left knee.

Doctors decided the second surgery was needed shortly after the first, but the procedures were spread out to minimise the impact on her commitments.

She was treated at the King Edward VII’s Hospital for a nasty bout of gastroenteritis in 2013, when she was aged 86.

It marked the Queen’s first hospital stay in 10 years.

The monarch spent one night in hospital and left thanking staff and smiling before being driven to Buckingham Palace to rest.

She missed an engagement in Swansea when she was due to present St David’s Day leeks to the 3rd Battalion The Royal Welsh.

In November 2013, the Duke of Cambridge stepped in to represent the Queen at an investiture ceremony after she suffered some ‘mild discomfort’ with her ankle after a busy weekend of engagements including the service of remembrance at the Cenotaph.

In 2014, the Prince of Wales stood in for the Queen for part of the Order of the Bath service to avoid her having to make an extra journey up and down some steep steps in full regalia.

She turned 90 in 2016 and, the same year, used the lift rather than stairs to enter Parliament for the State Opening, avoiding the 26 steps of the royal staircase at the Sovereign’s Entrance.

The Queen underwent eye surgery to remove a cataract.

The short planned procedure, which usually lasts just 30 to 45 minutes, took place in May 2018.

The Queen had faced ongoing ‘episodic mobility problems’ stretching back to last autumn and used a walking stick during her final days.

In October 2021, six months after her husband’s death, the monarch used the stick at a service at Westminster Abbey.

It marked the first time she had done so at a major public engagement.

After Prince Philip’s death, the Queen had struggled to carry out many of her usual in-person duties, with her mobility problems forcing her to either pull out of events or make an appearance via video calls.

She pulled out of the Commonwealth Day service at Westminster Abbey in March 2022, a significant date in the royal calendar, and did not attend the Maundy Thursday service on April 14.

But she rallied to honour the Duke of Edinburgh at a memorial service on March 29, walking slowly and carefully with the aid of a stick, and holding on to the Duke of York’s elbow for support.

On May 20, she missed the State Opening of Parliament for the first time in nearly 60 years, with Buckingham Palace attributing her absence to ‘episodic mobility problems’.

The Prince of Wales and the Duke of Cambridge opened parliament on her behalf as Counsellors of State, with Charles reading the Queen’s Speech for a historic first time.

On August 8, the Queen’s traditional welcome to Balmoral Castle by a guard of honour was reportedly held in private. A source said this was in line with events being adapted for the monarch’s comfort.

It is understood the decision was taken for the comfort of the head of state.

On October 20, 2021, after a busy autumn program, the Queen was ordered to rest by her doctors for a few days.

A Buckingham Palace spokesperson said she was in ‘good spirits’ but disappointed, as the medical advice meant she had to cancel a two-day trip to Northern Ireland.

October 2021: Hospitalised due to mystery illness

The Queen, aged 95 at the time, was secretly admitted to King Edward VII’s Hospital on the afternoon of October 20, 2021 to undergo ‘preliminary investigations’.

She was discharged the next day and ‘accepted medical advice to rest for the next few days’ and was said to be in ‘good spirits’ – carrying out light duties at her desk at Windsor.

November 2021: Pulled out of events

Concern for the Queen’s health mounted when she pulled out of more high-profile engagements in November 2021.

These included the Cop26 climate change summit in Glasgow on November 1 and the Festival of Remembrance on November 12.

Buckingham Palace said the monarch had been advised to continue to rest and to not carry out any official visits.

She was intent on attending the Remembrance Sunday service at the Cenotaph on November 13, but missed this due to a sprained back.

There were fears for her health when she caught Covid, testing positive on February 20, 2022.

The Queen, who was then triple-vaccinated, suffered from mild cold-like symptoms but said the virus left her ‘very tired and exhausted’.

She carried on with light duties while self-isolating at Windsor but cancelled some virtual audiences.

On June 3, a day after thrilling crowds on the first day of her Platinum Jubilee celebrations, the Queen pulled out of a celebration at St Paul’s Cathedral.

The decision was considered regrettable, it is understood, but sensible due to the length of the journey, the time involved and the physical demands of the event.

She went on to miss many other Platinum Jubilee events, making only two public appearances.