Follow
Home » Lifestyle » Doctor Who is a profoundly silly show, and therein lies its charm

Doctor Who is a profoundly silly show, and therein lies its charm

There are few shows in TV history that have been criticised as ferociously and relentlessly by their own fans as Doctor Who. Every single Doctor-phile has their own very specific idea of what the show needs to be, and at no point in its history has it quite lived up to any of them, despite the fact that every one is harking back to some vague point in the past when it was somehow better. 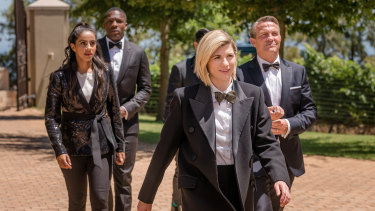 Doctor Who (Jodie Whittaker) and her companions don’t take themselves too seriously. Credit:Ben Blackall

Maybe it's because most people are introduced to the Doctor as children, and we guard nothing so jealously as the joyous recollections of our youth.

The current Doctor is, famously, a woman, a development which angered a lot of people who found travelling through time and space, meeting historical figures and fighting alien hordes a bit unrealistic when done by a lady. But Jodie Whittaker is quite a good Doctor, her cheerful Northern accent and bouncy enthusiasm bringing an infectious energy to the whole Time Lord malarkey.

She seems to find all the adventuring a bit of a laugh, which is only appropriate, since taking the Doctoring business seriously would make the whole thing laughable. Doctor Who is, after all, a profoundly silly show, and while there's always room for the odd heartfelt character moment, there's no point pretending otherwise. Its silliness is the main part of its charm, and any good Doctor needs to understand that, whether they're a young Yorkshire woman in a hoodie, an elegant old Scot in a purple suit, or Tom Baker – who will always be the real Doctor, let's face it. 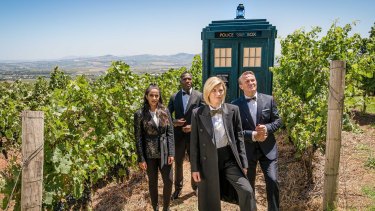 The Doctor is at her best when she stops explaining everything to everyone and starts kicking arse.Credit:Ben Blackall

It's a tricky balance to get right. Perhaps the biggest flaw of the new show is its tendency to treat every story as an educational opportunity. The Doctor and her companions – of which there are three, which is frankly too many and tends to short-change each one on screen time – often walk about delivering potted lectures as if terrified that the audience might fail to get What This Is About.

It's exacerbated by a predilection for basing episodes around historical characters that the show clearly wants us to be better informed about. Were these episodes being produced as teaching aids for Year Sevens, this would be a brilliant way of delivering the lesson: as it is, you can't help the sneaking suspicion that "Show, Don't Tell" was a class the writers missed.

The Doctor is at her best when she stops explaining everything to everyone and starts kicking arse all over the multiverse. Obviously she does it in a very cerebral way, defeating the monsters through her superior intellect and cunning rather than going the kickboxing route – which is why the Doctor has always been a breed apart from your average superhero.

But a superhero she is, and it's deeply satisfying to see her plans come together and her slightly campy, affordably-constructed enemies get their comeuppance. If only she'd cut down the lecturing, and maybe jettison a companion or two.

a, Doctor, is, profoundly, Sil, Who
You may also like:

Weinstein Guilty Verdict Sends a Message to Victims and Prosecutors