This was Keir Starmer’s ‘Neil Kinnock moment’… now for the bloody civil war: DOMINIC SANDBROOK on Labour’s greatest schism since that electrifying conference assault on Militant

What an extraordinarily dramatic, shaming moment this is. Extraordinary for British politics; shaming for the Labour Party; and in our lifetimes, at least, utterly without precedent.

Even a few years ago, for one of the two great parties to cast out its own former leader, less than a year after he stepped down, would have been unimaginable. But Jeremy Corbyn always said he wanted to rewrite the rules of British politics; and now he has.

How strange it is to think that 12 months ago, he was voting for a General Election after which he hoped to lead a new Government and push through the most ‘ambitious and radical’ changes that Britain had ever seen.

For Mr Corbyn, however, things have turned out rather differently. Yesterday afternoon, a year after he uttered those words, he was unceremoniously suspended from the Labour Party — a unique humiliation for an ex-party leader.

And rarely has any defenestration been more richly deserved. 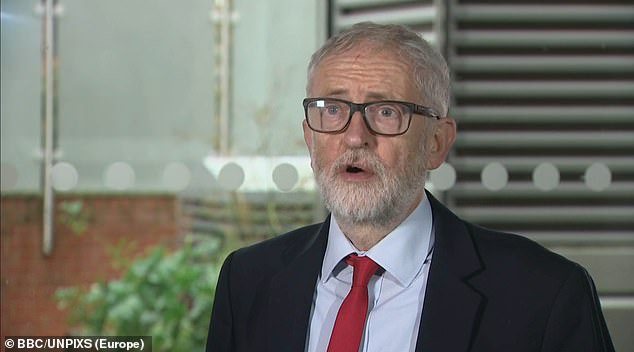 As the Equality and Human Rights Commission’s long-awaited and damning report into Labour’s culture of anti-Semitism revealed, Mr Corbyn’s staff interfered with complaints proceedings, failed to treat the issue with the care it deserved and even harassed insiders who drew attention to the party’s failings.

What finished him off, though, was not the report, but his reaction to it.

In many ways this was Jeremy Corbyn in microcosm: vain and utterly insensitive.

As always, he blamed everybody but himself. Allegations of anti-Semitism, he said, were ‘exaggerated’ by Labour’s enemies in the newspapers — the same papers that had, in reality, exposed his own unforgivable complicity. 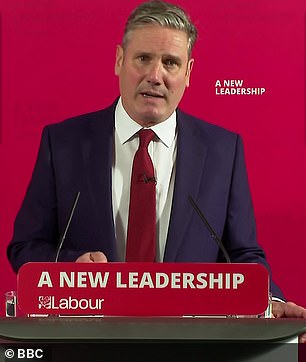 Time and again the Mail published evidence of Corbyn’s behaviour, such as his attendance at a conference at which speakers compared Israel to the terrorist Islamic State and called anti-Israeli violence ‘magnificent’.

On every occasion, the then Labour leader attacked the Press and threatened to put newspapers under State control. Another reason to be grateful that he never got his hands on power.

But I shall come back to Mr Corbyn. He is yesterday’s man, and this is really a story about his successor, Sir Keir Starmer.

Since taking over as Labour leader in April, the QC and former Director of Public Prosecutions has trod cautiously.

By any standards, his move against his predecessor represents a huge political gamble.

Yesterday, some Labour insiders hailed it as his ‘Clause Four moment’, remembering the episode in 1994-5 when Tony Blair staked his leadership on scrapping the party’s commitment to massive nationalisation.

But older readers will remember a much better parallel — the only one, in fact, that comes vaguely close.

In the autumn of 1985, another Labour leader, Neil Kinnock, used his party conference speech to launch a full frontal attack on the extremist Militant faction, which had been shambolically misruling Liverpool City Council.

In the face of intense jeering from the floor, Kinnock tore into the ideological extremism of the hard Left: their ‘impossible promises’ and ‘rigid dogma . . . outdated, misplaced, irrelevant to the real needs’, which ended with the ‘grotesque chaos of a Labour council, hiring taxis to scuttle round a city handing out redundancy notices to its own workers!’ 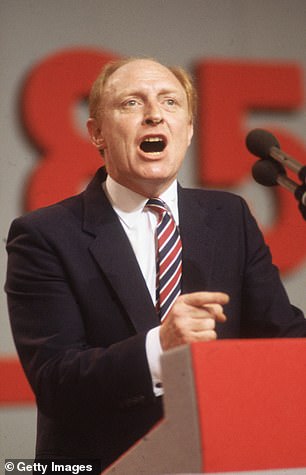 As you read those words, no doubt you can hear Kinnock’s voice and recall the passion of his delivery. It was spellbinding stuff — not enough to make Kinnock Prime Minister, mind you.

But it represented a turning point in his party’s history, dragging it back towards decency from the abyss of hard-Left extremism. Without Neil Kinnock’s courage that day, there would have been no Tony Blair and no New Labour.

Sir Keir is not remotely in Kinnock’s class as an orator. But in its way, his brutal evisceration of Jeremy Corbyn is just as daring.

Why did he do it? One explanation is simply that he was so appalled by his predecessor’s arrogance, insensitivity and lack of contrition that he had no choice.

The problem with that, though, is that Sir Keir was happy to sit in Mr Corbyn’s Shadow Cabinet for four years, closing his eyes to the abuse of Jewish MPs, the reports of Mr Corbyn’s links with Palestinian extremists and even the revelation of his support for a viciously anti-Semitic London mural.

A more plausible explanation, then, is that this is a cold-blooded political gambit.

After his party’s crushing defeat in December’s election, Sir Keir is desperate to show voters that he is different from his predecessor.

For months he has been searching for a way to differentiate himself from the Left-wing fanatics who have dominated the party since 2015 — now he has found it.

But it comes with huge risks. First of all, Mr Corbyn still commands considerable affection from many Labour MPs. Some of Starmer’s own Shadow Cabinet served under him, for example, such as his deputy Angela Rayner.

Then there are the union bosses, who have been some of Mr Corbyn’s keenest supporters. His suspension was ‘fundamentally wrong and needs to change’, proclaimed the Communication Workers’ leader David Hill. That sounds like a threat to me.

Labour’s biggest paymaster, the hard-Left Unite boss Len McCluskey, has never hidden his suspicion of Mr Corbyn’s successor. In what was widely interpreted as a shot across the new leader’s bows earlier this month, Unite’s donations to Labour were cut by ten per cent with Mr McCluskey reminding Sir Keir that he must represent ‘ordinary working people’. 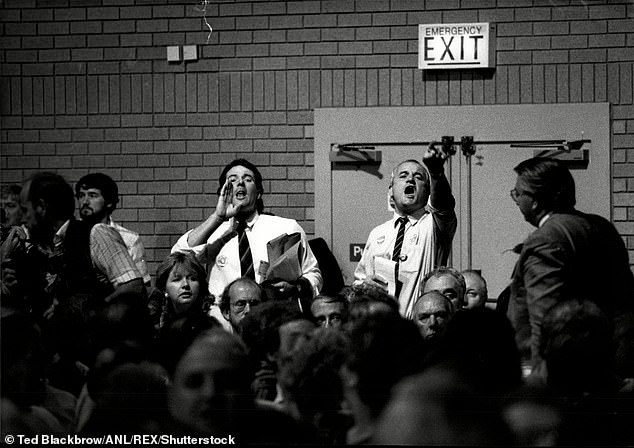 Following yesterday’s events, the next few months could easily see their tension escalate into civil war. Indeed, Mr McCluskey condemned the Corbyn suspension and said ‘chaos’ would ensue. ‘A spilt party will be doomed to defeat,’ he said.

Above all, though, there is the great mass of Labour activists. About half of the party’s current members joined under Mr Corbyn, and many of the most fervent activists remain devoted fans.

Of course, it is true that Sir Keir won a thumping victory in the spring’s leadership election. But he did so by betraying no hint of his own ideological persuasion.

If he is serious about dragging Labour back towards sanity, he will need to take on the prejudices of those activists. And that brings me back to Mr Corbyn himself.

Unfit as he was for leadership, Jeremy Corbyn was nevertheless a perfect representative of the culture of the Labour Left. His prejudices — anti-capitalist, anti-American, anti-Israeli and even anti-British — were typical.

So were his intolerance, his ignorance and, above all, his towering, invincible self-satisfaction.

Spend any time with people who share his politics and you soon learn to recognise the type. This, then, is Starmer’s real problem. For Jeremy Corbyn was never more than a symptom. Indeed, even the culture of anti-Semitism is merely part of a wider Left-wing world-view, in which people are forever ranting about corrupt capitalists and evil elites.

The Labour Party’s true ills, then, are far more deep-rooted than the stupidity of a single man. To cut them out, and bring the party back towards the middle ground, will take more radical surgery than the banishment of Mr Corbyn.

But does Sir Keir have the stomach for a protracted fight? Is he prepared for real political blood-letting, taking on not just the unions but thousands of hard-Left activists? We shall see.

The fear, of course, is that all this is just smoke and mirrors. It is telling that Mr Corbyn has not been expelled, just suspended. I wonder whether, when the fuss has died down, he will quietly be allowed back into the party.

And so Starmer will content himself with an admirable but purely symbolic gesture, and nothing will have really changed.

But perhaps this is really the start of something: a tumultuous, historic fightback against the extremists who, under Jeremy Corbyn, were allowed to take control of a once-great party.

If so, I hope Sir Keir succeeds. In troubled times, Britain desperately needs a credible Opposition.

But it won’t be easy. There will be plenty of tears — and metaphorically at least, torrents of blood — before it’s over.

DOMINIC, Keir, on, SANDBROOK, star
You may also like: