JANE FRYER: Oh, the agony as our hopes slipped away and dreams were dashed for fans who idolise England coach Gareth Southgate

Everything starts so well. An hour before the game, plastic pint glasses are flying through the air like confetti at Boxpark Croydon and the floor is swimming with Coors lager.

The TV cameras are swathed in black bin bags for protection and staff have all packed a change of clothes.

Everyone else is soaking, but no one cares because the atmosphere is extraordinary – febrile, tense, ecstatic and, most of all, full of hope. Most fans are still hoarse from Saturday, but still they dance, pogo, yell, shout, burst into song every other minute, clutch each other and sing the national anthem (word perfect).

Most of all, they chant over and over: ‘Football’s coming home.’ When Trippier scores in the fifth minute, the roof nearly blows off as the fans go even crazier as all around me they leap, weep, roar and dare to dream. Naturally, another 1,000 pints of lager are hurled into the air. 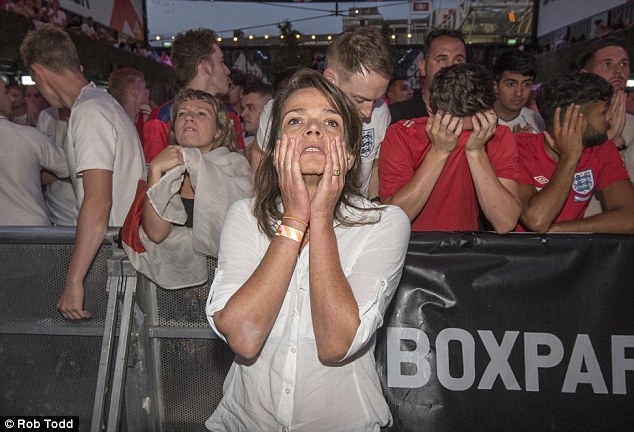 Oh no, not again: Jane Fryer looking distraught as she shares the disappointment of fans at a lager-soaked Boxpark in Croydon

One man with a broken leg wearing an English flag as a sarong is dancing like a mad thing.

Most have been drinking for hours. All are beside themselves with joy to be here.

They’re not all men. There’s also a smattering of girls in very short shorts with neat St George’s flags painted on their flushed cheeks who, like me, are every so often hoisted high into the air by overexcited men in England shirts.

No wonder Boxpark – a food and drink venue entirely constructed from refitted shipping containers – has become the place to watch the football in England. 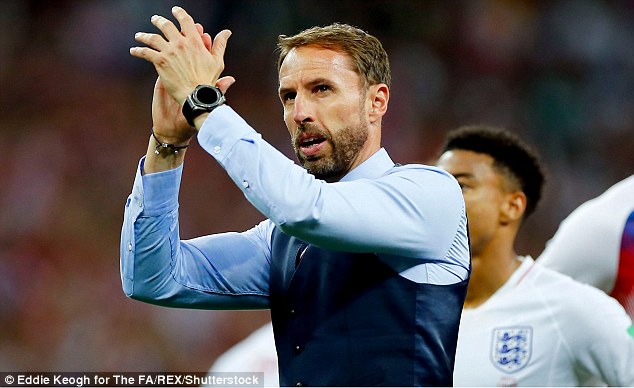 Gareth Southgate applauds the fans after the match

Praised by BBC host Gary Lineker and pundit Rio Ferdinand, the South London site has become famous for its scenes of ecstatic jubilation as monsoons of lager are hurled about at every England goal.

Or, indeed, anything close to one. This is Gareth Southgate’s spiritual home. He cut his footballing teeth at nearby Crystal Palace back in the 1990s and fans here wouldn’t be anywhere else.

Not at home with their long-suffering wives and children, and certainly not at the 81,000-capacity Luzhniki stadium in Moscow.

‘We’d take this place over Russia any day,’ says Jimmy Lyons, a 38-year-old plumber from Epsom. ‘This is the mecca of English football. The atmosphere, the fans, the DJ, the whole place rocks.’

‘It’s all because of Gareth Southgate – sorry, Sir Gareth,’ says Pete Dawson, an accountant from Dorking, who is so wet he looks like he’s climbed out of a river of lager. They worship and adore Southgate in Croydon.

‘He made a lot of friends when he lived here and everyone from his old barber to the retired sports editor of the Croydon Advertiser – where the young Southgate used to spend his day off penning a (free) football column – remembers him with deep love and affection.

You can’t avoid getting involved – the atmosphere is infectious. The air is thick and sweet and wet with beer. Macho men hug one other. A huge sign by the bar reads: ‘Does anyone know the whereabouts of football? Been expecting it home for YEARS.’ 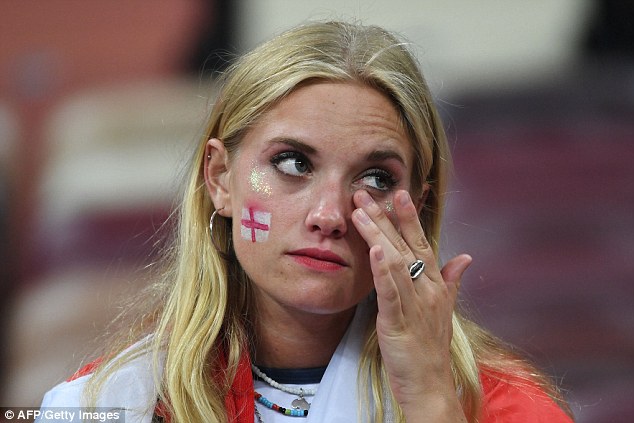 Steve Berto, a 34-year-old freelance casino croupier is so excited that he gets down on one knee in front of the braying crowd and proposes to his Canadian girlfriend, Roxanne Duguay, 38.

It’s not everyone’s dream proposal, but Roxanne clearly knows what she’s dealing with. She’s been nursing him back to health since Saturday (‘I went in a bit hard here at the quarters and I’ve been gargling TCP ever since,’ says Steve) and this morning spent over an hour lovingly stenciling the three lions on his shiny pate.

Half time is one massive sing-a-long and group dance as the on-site DJ pleads with the crowds not to throw beer near his decks.

God only knows how many pints of lager the bar staff pour. Certainly not the 2,500 estimated by the venue’s management. I’ve surely seen twice that up in the air alone. By half way through the second half, the mood shifts.

They stop throwing beer and sing the national anthem again with their hands on their hearts. They look tense and excited and full of hope.

Then comes Perisic’s goal in the 68th minute and the place freezes. Muscles hammer in jaws.

Heads are cradled. Tears brim. For the first time all evening, the crowd is still. You can feel the hope slipping away, the dream fading. A shirtless man with ‘Be the game changer’ tattooed across his left breast looks broken.

But they don’t give up. There are endless increasingly brave rounds of Three Lions and Come on En-ger-land – through to the end of full time, the agony of the Croatian goal in extra time and right up until the final whistle. And then just pale faces and tears.. and a very, very wet floor.

TK Travel Movies That Are a Vacation From Reality