From a sequin-clad partygirl to an aristocratic outsider who fell for a mother-of-eight, meet the relatives who prove Brexit-sabotaging peer the Duke of Wellington isn’t the only scandalous member of his family

She stands, hands on hips, a sumptuous white coat open to reveal tiny red shorts and a cropped white blouse that showcases an expanse of tanned stomach.

Her pose, topped off with a white stetson, is impassive, but the over- arching message is clear: here is a beautiful woman accustomed to commanding attention.

She is not a celebrity, however — at least, not in the contemporary sense of the word. There is no film or hit single to promote; no reality television show in the pipeline. She is 22-year-old Eleanor Wellesley, descendant of the Duke of Wellington, who beat Napoleon at the Battle of Waterloo in 1815 before becoming Prime Minister.

Some aristocrats celebrate their heritage discreetly. Not so university student Eleanor, who appears to be making her mark on the world by posting a string of bikini-clad selfies on social media platform Instagram and covering the glamorous star-studded Californian music festival Coachella for society bible Tatler, for whom she supplied more provocative pictures this month.

In one, she sits on the bonnet of a blue convertible, sequin-clad legs artfully akimbo.

Yet she is not the only member of the blue-blooded Wellesley family — whose fortune is estimated at £75 million — to defy convention. Last week her uncle Charles, a Tory Peer and the 9th Duke of Wellington, led a revolt against the Government to try to derail Brexit.

Then there is Eleanor’s father, who left her mother for her French teacher; her cousin, who married a pop star, and her aunt who turned down Prince Charles to conduct a clandestine affair with a married man. Oh, and another cousin whose celebrity wife’s business went bankrupt, and the relative who spared his benefits cheat lover and mother of ten from prison.

Confused? ANTONIA HOYLE on the clan that appears to court controversy at every turn . . .

Eleanor, 22 — known to friends as Elles — has her ancestors’ arresting aquamarine eyes, is a regular on the polo circuit and currently in her final year of a History of Art degree at Exeter University.

Notorious for those bikini-clad selfies on Instagram (on which her settings have, perhaps wisely, now been switched to private), she reportedly posted a picture of herself with the four girlfriends she shares a house with in Devon alongside a mischievous caption ‘100 likes for the naked version’.

Perma-tanned and peroxide blonde, her sequin-heavy scantily-clad sartorial style captured the imagination of editors at society bible Tatler, who asked her to report on the celebrity-studded Coachella music festival this month. She attended alongside the likes of actor Leonardo DiCaprio and models Gigi and Bella Hadid.

After what she describes as a ‘wild weekend’ she supplied impossibly glamorous pictures of her exploits — including the one of her atop a car bonnet — to the magazine before hotfooting it to the luxurious Beverly Hills Hotel ‘for four days of poolside relaxation’. 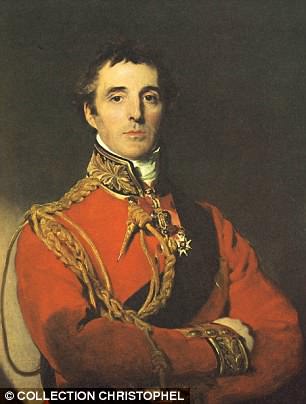 Septuagenarian Charles — the 9th Duke, married since 1977 to a Prussian Princess with whom he has five children — recently claimed in an interview he is ‘not particularly interested in per- sonal questions’.

He presumably prefers extravagant weekends hunting partridges on the family’s 4,000 acre Spanish estate, bequeathed to the Wellesleys by a grateful Spanish royal family after the Napoleonic Wars.

The first Duke not to have served in the Armed Forces, he was Conservative MEP for Surrey between 1979 and 1989, and has been a Tory Peer since 2015, last week leading a Brexit revolt among fellow peers.

Political colleagues have described him as ‘remote’ and ‘amazingly conceited — even for a Duke’ and Brexiteer and Tory MP Ian Liddell-Grainger is so angered by his anti-Brexit stance he announced this week he was ‘going to challenge him to a duel on a lawn’ with kippers apparently his weapon of choice.

LORD WITH A TANGLED LOVE LIFE

The youngest of the 8th Duke’s children, Lord Christopher Wellesley, 53, caused a scandal by falling in love with Emma Nethercott, his daughter Eleanor’s 28-year-old French teacher, while still married to his first wife and Eleanor’s mother, Laura.

A heartbroken Laura, the daughter of a millionaire roofing company owner, who had previously been married to Barry Cox, co-founder of The Hard Rock Café, described her split with Christopher as ‘stressful’. Emma, already pregnant when she and Christopher married in July 2005, opted to have Eleanor as a bridesmaid.

In 2013 their nanny was convicted of stealing £30,000 worth of belongings from their Hampshire home, while the middle of their three children, Skye, was born with Rett Syndrome, a condition that stops nerve cells in the brain from working properly.

In poignant tweets, devastated Emma wrote that having a ‘vulnerable’ child meant she was ‘destined to be emotionally unbalanced’ and she believed ‘motherhood is a test and I am failing’.

Emma and Christopher divorced in February 2015 on the grounds of his unreasonable behaviour.

Described as ‘Top Tiara Totty’ by one society hostess, Charles’s wife, Princess Antonia von Preussen, 63, arguably trumps her husband on the aristocratic-stakes by being both the great-granddaughter of the German Kaiser and a descendant of Queen Victoria.

She experienced tragedy at the age of 11 when her father, Friedrich, committed suicide after her mother, Lady Brigid Guinness — one of the brewing dynasty — left him for a British Army Major.

Antonia was educated at Cobham Hall school in Kent, where she reportedly told her headmistress she would not tolerate low standards after finding a hair in her apple pie aged 15.

A friend of Princess Michael of Kent, Antonia also played tennis with Princess Diana but seemed to reserve her loyalties for her friends Prince Charles and Camilla Parker Bowles, whom she and her husband reportedly hosted on their estate before their relationship was made public.

When Charles was under fire during his marriage crisis, defiant Antonia declared: ‘It is absolutely horrid for someone who works so hard to be slagged off like that.’

Possessed of a not-particularly-loyal sense of humour (she quipped her family is ‘nouveau’ because their title has only been around for two centuries), Jane Wellesley — daughter of the 8th Duke — was nonetheless touted as a future queen after dating Prince Charles in the Seventies.

Jane, 64, a television producer and author, reportedly rejected Charles’ marriage proposal with the line ‘I don’t want another title, I’ve got one already’.

Their secret London register office ceremony was held the day after Elton John’s infamous End of Summer party in Windsor, with Sofia reported to have joked to friends that she was ‘almost too hungover to get married’.

In June 2016 Sofia, the daughter of Lord John Wellesley, and granddaughter of the 8th Duke, and Blunt, best known for his ballad ‘You’re Beautiful’, had a son. The toddler — whose name has yet to be made public — has pop star Ed Sheeran for a godfather.

Not just a blonde beauty and best friend to the likes of Prince Harry and Princesses Beatrice and Eugenie, Sofia was appointed to the board of Cherie Blair’s controversial legal consultancy, Omnia Strategy, in 2016. It was found to have been paid almost £500,00 for legal advice by the Albanian Government — a contentious contract given Tony Blair’s role as an adviser to Albania’s prime minister.

MARQUESS WHO MARRIED A KIDD

As the oldest of his father Charles’ five children, Arthur Wellesley, 40, who holds two titles, The Earl of Mornington and Marquess of Douro, is also heir to the Wellington title.

A former management consultant, he met Jemma Kidd — an ex model and make-up artist and fellow aristocrat whose great-grandfather was the press baron Lord Beaverbrook — in an Ibiza nightclub. Jemma’s sister Jodie is a supermodel and brother Jack is a professional polo player.

‘Arthur gave me confidence. He is a caring and loving man and from the start I felt secure and happy with him,’ said Jemma. They married at the Kidd family’s estate in Barbados in 2005 and, after having twins in 2010, left London to live in the Wellesleys’ Hampshire Estate, Stratfield Saye.

Jemma, 43, describes it as an ‘oasis’ (but says that, as with ‘most English country houses’ it took three hours to run the bath). She has described herself as ‘blissfully happy’ with her Oxford-educated husband, but found less fulfilment in her career. In 2012 her make-up company went into administration with debts of more than £2 million.

BRUNETTE WED TO A BILLIONAIRE

Photographer’s assistant Charlotte, 27, and Harvard-educated Alejandro, 41, who has shares in his family’s brewery business, the Santo Domingo Group, exchanged vows in the 16th Century Church of the Incarnation in the Andalusian hills near the Wellesleys’ Spanish estate.

Charlotte wore a gown by Emilia Wickstead, one of Kate Middleton’s favourite designers, with guests including the Duchess of Cornwall, Juan Carlos, the former king of Spain and Czech supermodel Eva Herzigova.

Last year Charlotte and Alejandro entered the Sunday Times Rich List at number 29, their accumulated estimated £3.7 billion fortune achieved through ‘inheritance, brewing and investment’. They have sinced dropped to number 40 — down £600 million.

after spending £20 million on four flats in London’s fashionable Notting Hill, their planning application to turn the properties into one ten-bedroom home was rejected.

OUTSIDER WHO FELL FOR mother of eight

Aged 17, Richard Wellesley, whose great great-great-grandfather Henry was the younger brother of the 1st Duke of Wellington, started dating Paula Carton, whom he met while she was living on a farm in Ireland owned by his family.

Apparently undeterred by the fact that Paula was ten years his senior and had eight children from a previous marriage, Richard gave her a ninth child when he was still 17 and relocated them all to Wales, where he studied at Aberystwyth University before working at a builder’s merchant.

In 2012 Paula was found to have falsely claimed £108,000 in housing benefit by posing as a single mother and claiming Richard was her landlord, rather than her lover and father of two of her children.

Richard, now 45, who received £30,000 a year from trust funds set up for descendants of the Duke, paid the debts to prevent her going to prison, to the astonishment of neighbours who had no idea he was an aristocrat.

Brexit, Duke, isnt, one, peer, proving, relatives, sabotaging, scandalous, the, Wellington
You may also like: